Taking a Look Back: Yoshi

They don't teach Yoshi history in school.
by TumsST

In this era of Nintendo gaming, nostalgia is a major selling point for the company. All the popular kids are doing it, like the Legend of Zelda and Super Mario. Let's be honest, Mario has done it for years now--but there is one Nintendo-Saur that doesn't get the history lesson that it deserves. In honor of his newest game, join me in taking a look back at Mario's favorite dino, Yoshi.

Yoshi first graced the eyes of Nintendo players as Mario's dinosaur friend who needed help rescuing his dino friends from the evil clutches of King Bowser Koopa and the Koopa kids. Most of Yoshi's maiden voyage was used as a launch point for Mario.

Was it right for Mario to throw Yoshi down a cliff so he could save his own skin? Maybe if Yoshi had ingested the special koopa troopa shell that could produce wings or the special wings that sometimes appeared. If he wasn't driving a go-kart, Yoshi didn't get much exposure. 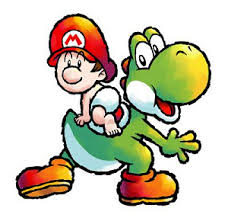 So I know what you're thinking, "When does Yoshi get the spotlight?" Yoshi's Island, or the sequel to Super Mario World, tells the tale of Yoshi and Baby Mario trying to reunite Baby Mario with his brother, Baby Luigi.

The game is still one of my favorite games and plays like a great platfomer. Yoshi's Island has some of what modern Yoshi is known for, like the hover/flutter jump and egg launching techniques. It also brought the Mario Babies to the franchise, and without them, I wouldn't have my Baby Luigi/Koopa Troopa Mario Kart Double Dash driving combo.

Yoshi can also transform into different vehicles in the game that allow him to traverse all over the island, collecting flowers and red coins to reach a perfect score in each level. One thing that players might not remember that there were slightly 3D like graphics in the game, and this should allow the series to easily transition into the 3D world. 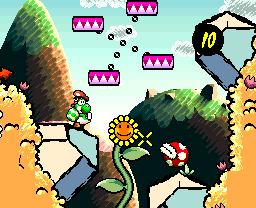 Yoshi isn't all about baby sitting Mario. The NES was where Yoshi, the puzzle game developed by Game Freak, brought some great music to the original Nintendo. My brother and I had some hectic puzzle battles in that game and who knows, without Yoshi, Game Freak might not have had the "street cred" to create Pokemon. Yoshi was one of the original Smash Brothers characters, as well as one of the original Mario Kart drivers, as I mentioned earlier.

There was another Yoshi game for the Super Nintendo, Yoshi Safari, that I never played that used the Super Scope that never really took off. I remember one kid on my block had the Super Scope and we played the Terminator game with it. Yoshi has been a mainstay driver in the Mario Kart series and has had some pretty crazy race tracks like Yoshi Valley and Yoshi Circuit, just to name a few. I know there have been other games that Yoshi has been the star of, but these are the ones that have the most memorable moments for me.

To recap, Yoshi's New Island is hitting store shelves on March 14th. On the same day, a special Yoshi 3DS will be released as well. Yoshi's Island for the Super Nintendo is one of Yoshi's greatest adventures and one of the best games for the Super Nintendo, period. Along the way Yoshi has shown off his ability to drive and fight like a champion. I will finish with this: Yoshi was WAY better before he could talk and make those high-pitched screech noises, but even so, he can be the starting centerfielder for my Mario Fireballs any day!