As we enter the third year of the Playstation 4/Xbox One era of gaming, many gamers are making the jump and trading in their old systems. But perhaps there's reason to hold on to that old hardware? Here with Last-Gen Raider, we're going to dig into some of last generation's more obscure and quirky titles you might have missed. So hook up your old hardware -- we're going back to the land before lawsuits over video resolutions! First up: Lost Planet: Extreme Condition Wow, are we starting with an old one. I genuinely picked this title up for $2, that's how close this title was born. New Playstation 2 titles were still coming out around the time Lost Planet: Extreme Conditions released, and it shows in both good and bad ways.

Lost Planet is a game born out of someone's personal design, and is feels surprisingly like a AAA-scale indie game as a result. Considering the title duels with ideas of survival games and action games, it's surprising both the controls and gameplay work. That said, the controls feel almost alien at first. 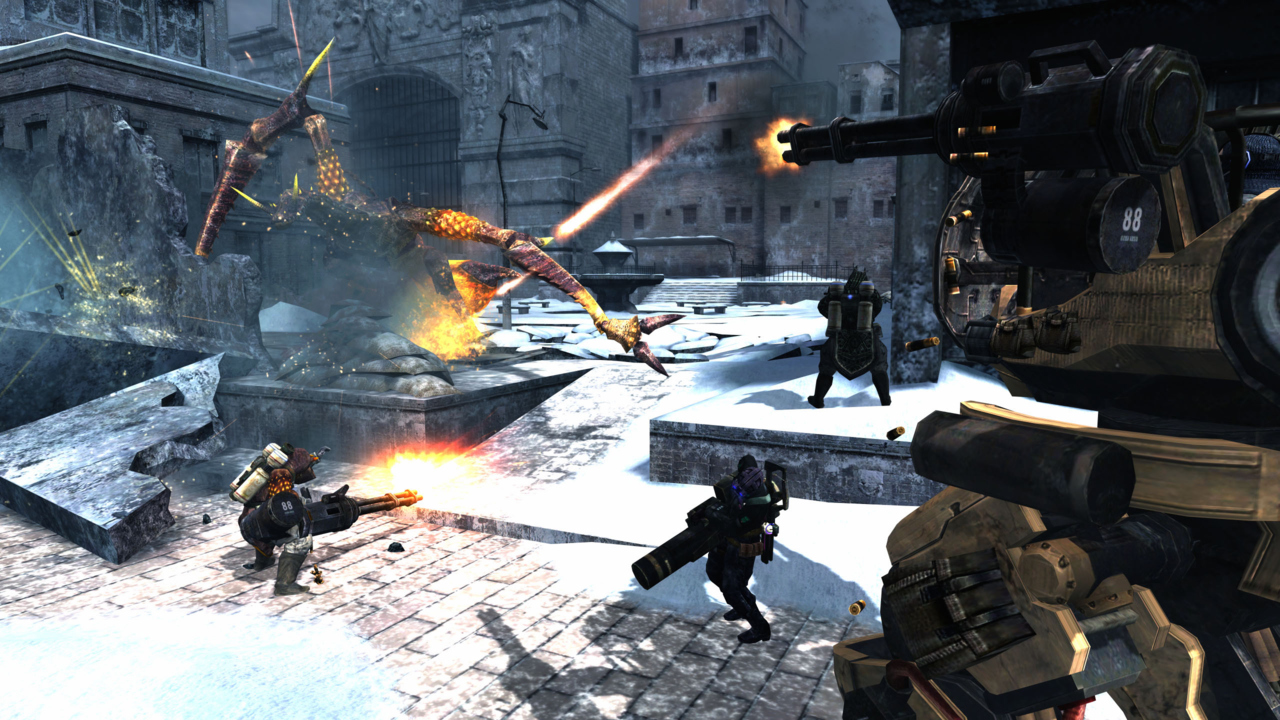 The aiming system tries to simulate the precision of a mouse on a controller, and you can zoom the game into a first person view with the D-Pad's camera controls. There is no sprint function, but you can jump out of the way of incoming projectiles. Mech suits control more like modern shooters than when you're on foot, and even have some of the dashing and jumping moves new games like Call of Duty: Advanced Warfare have.

It's in this weird blend of modern and old school ideas that the game finds its balance. Mechs are like Titans in Titanfall -- breakable but powerful game changers that are almost always necessary for boss fights. You can rip guns off their arms and wield them like Rambo on foot, and swap in new parts as you need. Some mechs let you boost jump around, others use hovering and melee attacks. They all serve a role and have a variety of weapons, from charged mag rail guns to cluster mortar barrages.

Every moment you're outside a mech, you want to get back inside one.

On foot, things can be just as hectic, but the pace is a bit slower. Navigation clearly had a lot of thought put into it. If you fall off a ledge, protagonist Wayne will auto-fire his grappling hook to catch himself. You can then either zip back up or drop down. You can also use the grappling hook to clear small gaps and reach higher locations.

The standard two weapon rule applies here, but sadly on-foot weapons don't match the variety the mechs get. You learn early on that the shotgun is king, and that the assault rifle is always good to have around. The rest of the guns, save for a weird charged energy weapon, are fairly standard. What keeps on-foot gameplay interesting is the health system and enemies. This is also where the survival gameplay comes into play. 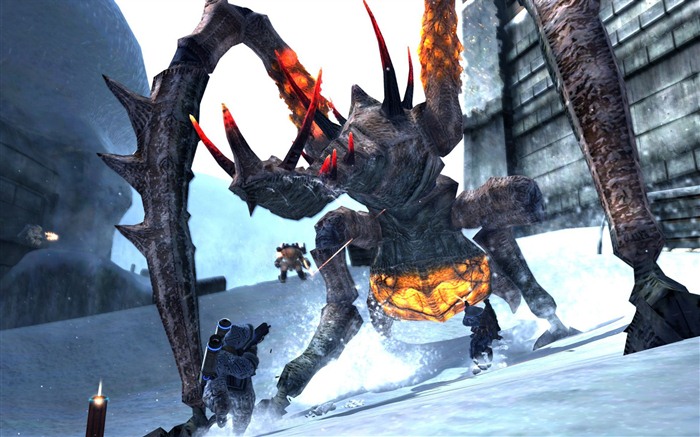 Excuse me, do you have a moment to speak about our world destroyer, Cthulu?

The Akrid are your primary threat in Lost Planet, and they are fantastic. Much like the Necromorphs in Dead Space, the Akrid are the core focus instead of just the combat mechanics themselves. Variety does not come from your guns, but from the various Akrid you fight. Giant ice worm Akrid, weird insect Akrid, armadillo Akrid, and more try to impede your progress. But you have to kill them, because their very blood is keeping you alive.

The planet of E.D.N. III, where the game takes place, is so cold that you constantly are losing heat. Your suit could have enough fuel to burn over two hundred degrees Kelvin, but that might only last you a half hour at best. If you get injured, it'll burn away even faster as it's spent healing you (don't wonder about how temperature magically heals you, the plot doesn't care either). How do you get heat? From breaking objects containing fuel in the environment, and from killing Akrid.

What this leads to is a great tug of war. You have to be aggressive enough to win the day, but also careful enough to not waste all your T-energy. Sometimes you'll barely pull out a win in one of the game's many, tough boss fights. Other times, you'll slaughter enough enemies to walk confidently into battle, guns blazing. It's not a perfect system, but it is a refreshing change of pace.

It's also in these boss fights we see the best and worst of Lost Planet. Some fights take place in large areas and give you a ton of flexibility. These are often the best fights. The worst, are the ones that lock you in tight areas with bosses who can whip out a move that can nearly K.O. your latest suit in a single blast. These fights suck. It's a coin toss at every level over which you'll end up with. Still, if you liked boss fights in Dark Souls, there is a similar approach here to their execution.

You probably noticed I haven't spoken about the story. There's a reason... it is absolutely terrible. There are budget animes with less clichés than the schlock story that ties the game together. A protagonist with amnesia, misunderstood sides, turn-coat among the ranks, the wacky tech guy, the token girl who does nothing... Lost Planet's story is a bore. But hey, at least we got an Asian protagonist instead of just another bald, gruff white guy. That is honestly the only positive I could think of for Lost Planet's story.

I'll give you three guesses as to which one is the bad guy.

At the end of the day, you can look past the rough storytelling. The shooting is satisfying, the action feels distinct, the Akrid are great fun as enemies, and the light smattering of survival mechanics all make for a decent title. Whether you get the Colonies re-release with bonus content (including multiple modes of play) or the original (which still lasts around eight to ten hours in single-player), there's plenty of content here for $2-15. The PC version also has a demo on Steam, so give it a shot. E.D.N. III is waiting, Wayne.

If there's a last-gen title you'd like me to take a look at, be sure to let me know in the comments below!