INTERVIEW: Codemancer Teaches Programming to Children... And Makes It Fun!

Codemancer is an educational game targeted toward children 9-14 and teaches the magic of coding in a fantasy world.
by Krystina Butler

Rob Lockhart is creating a game called Codemancer that teaches the magic of coding and programming to children ages 9 to 14.  His Kickstarter campaign has raised almost $45,000 with a few more days to go for the campaign, which is setting him up for a great success to finish the game.

Codemancer is a gender-neutral fantasy game with a female protagonist named Aurora who must rescue her father from an evil sorcerer that has kidnapped him just as she begins to master the runic spells.  But something that makes this game interesting is the magic that Aurora and the evil Sorcerer use works the same way as programming works in our world.  Such as this "spell:" 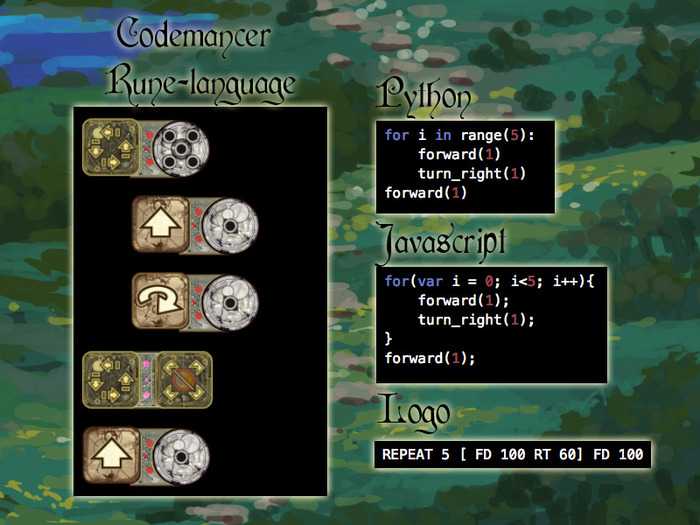 ...which looks like this when executed in the game...

This week I spoke with Lockhart about his game and what we can expect from it.

What was your inspiration for Codemancer?

Well, the idea began with this: "What if Logo were a game, instead of a Toy?"  LOGO is a programming language for kids written in the 80s, and it was, for a time, the only way to expose kids to programming.  Most of the efforts to make programming accessible--Scratch, Greenfoot,  Alice, etc.--owe a lot to LOGO.

But most people were making more tools - more toys.  These appeal to kids who have their own goals in mind, like those who value self-expression very highly.  There are other kids who tune out when you give them an open-ended toy.  They ask 'What am I supposed to do with this?' and when you say 'Anything!' what they hear is 'Nothing!'  What those kids need is a game.  Games give the player goals, and reasons for pursuing those goals.

Originally the game was going to be about Robots, and then Tanks - I actually built a prototype for that one - but I realized that kids that would want to program robots or Tanks are kids who would probably learn programming anyway.  They don't need me to make a game for them.  That's why I decided that it would be a fantasy game, and that spells would be programs.

My initial inspiration was The Last Airbender, which analogizes magic and martial arts, and has a great inclusive style.  Then I started reading everything I could get my hands on that included a character growing up and learning magic at the same time.  I took inspiration from Harry Potter, The Golden Compass, The Neverending Story, Sabriel, Mistborn, The Name of the Wind, and lots more.

I guess If I had to write one of those "X meets Y" statements for Codemancer, I'd say that Codemancer is "LOGO meets Sabriel."

You say the narrative of the game is inspired by popular works of young adult fantasy like Harry Potter, Mistborn, the Golden Compass, and more. In what ways do these popular fantasy stories contribute to your game?

One thing is just the tone - occasionally funny, often very interior to the character, sporadically terrifying.  It's a tone they mostly share, even the more abstract ones like 'a Wizard of Earthsea' and 'Wise Child.'

Another thing is character elements.  It's great if the main character starts the story a little rebellious - first of all because they can get into scrapes that move the plot along, but also so you can see the character mellow and wisen as they mature.

There are also specific plot devices.  Both Sabriel and The Golden Compass involve a daughter journeying North and learning magic to save her father.  The Golden Compass and a lot of folk tales that involve witches use the concept of an animal familiar.  In Harry Potter, and in The Last Airbender (which I know isn't a book, but kind of has the same feel) the main character has several different teachers over time, which reflect the stage the character is at in their studies and also in life.

How long have you been working on this game?

Well, I had the initial idea four years ago, but I've been working on this version the game almost a year now.

What's the hardest part about being the founder of a game?

I guess the hardest part is being a solo founder.  I talk to my wife a lot about decisions I need to make, and my friend Ryan Olsen helps me with PR decisions, but sometimes there's really nobody to talk to and I have to either go with my gut or just sit on the decision for a while and see how I feel about it later.

I think that next time I start a company, I'll have one or more cofounders.

Lockhart splits his time between creating learning games for clients and working on his own. What other games have you helped create?

I worked on a game for a research study at the University of Alabama, and a game that's on exhibit at the Notebaert Nature Museum.  Right now I'm collaborating with the Anti-Cruelty Society on a game called Paw & Order: Furry Victims Unit which will actually be designed by around 15 eighth-graders.

In the beginning of the game, the player choses a familiar that they control and acts as their companion through the activities. What options are there to choose from for a familiar?

There are three choices, a Macrocat (which kind of looks like a red tiger), a Hyperhound (which is very wolf-ish looking), and a Lambdasaur (which looks like a giant woodlizard).  Each of them has an attack ability, which start out relatively similar, but diverge as you become more adept with them.

The protagonist Aurora Li is described by Lockhart as a creative but entitled little girl.  Can you tell me some more about her character? In what ways is she entitled, and how does that contribute to her character and character development?

Aurora was raised by her dad, and she's been spoiled a little.  At times she struggles with selfish impulses that might not cause her to do the right thing, especially with the pressure of her rescue mission weighing on her mind.  Her heart is in the right place, though, and the better angels of her nature win more and more over time.

Lockhart has said the concept that would be learned through this games are comparable to what one would learn in a Programming 101 course. Do you think that that would be too difficult for someone in the 9 to 14-year-old age range that the game is targeted toward?

Actually, no.  I think a lot of kids in that age range are already learning that material.  Kids who are deeply interested in programming are googling tutorials and teaching themselves.  My aim with this game is to help kids who aren't automatically so interested to get started programming, too.

Do you hope that your game will ever be incorporated into a classroom setting?

I don't know.  There are so many things working against educational games, and one of them is being labeled educational.  That instantly makes kids like the game a lot less, and then you have to kind of win them back during the game experience.  That's even more true in a classroom.  That said, I think the more kids who play the game the better, and school may be the only place they get the chance, for technological reasons or others.

One thing I'm interested in is putting the game in libraries, which are increasingly the informal learning hubs in a community - especially since it's possible that Codemancer will have a companion novel.

The game will be available to PC, Mac, iPad, and Android tablets. Have you ever considered possibly expanding it to a mobile level (Android or iPhone) so that the game can be played on the go?

I've been thinking about phones.  Mostly the problem is how the user interface will work on smaller screens.  It's a design problem that I need to work on more.

Lockhart's kickstarter campaign was originally set for $12,000 and with over 1,500 backers $43,704 has been raised (at the time of publishing) and there is still more time to donate! What extra features can we expect from the extra donations?

I am making one of these for myself, so that the process of creating levels can be faster, but I'd like to make it a public-facing feature of the game, so that anyone can make their own Codemancer level.

I will put up a Udemy-style online course called 'Python for Codemancers,' and make it free for all backers. This course will transfer the skills you learn playing Codemancer to a real-world programming language.

I will collaborate with another author to create a companion young-adult novel set in the world of Codemancer. The novel will be free to all backers, will include spells that may be useful in the game, and will expand on the Codemancer lore.

So we can definitely expect a novel and special features in the future! You talk about a Level Editor that you want to make available to the public that would give players the ability to create their own levels, can you tell me more about this? Could it be prepared to world-building aspects of other games, such as Minecraft?

It won't be nearly as expressive and detailed as Minecraft!  Basically, players will be able to create a playing field - the hexagonal grid, and place world items on it.  World items can be things like rocks, trees, enemies, traps, triggers, walls, doors and very game-specific items like magic-jammers.

What more can you tell me about the "Codemancer lore" that you mentioned?

Well, humans' magical abilities are granted by a compact with nature.  Any human can exercise this control, assuming she has the right equipment (a rune tablet) and the knowhow to use it.  The problem is that using it can be quite difficult, and most people give up.

What I like about this mythology is that it doesn't make magic the sole purview of the genetically gifted.  Anybody can do it if you work hard enough and think creatively.  The fact that most people start by commanding an animal familiar is more pedagogical convention than neccesity.  It's just easier to learn by starting with an animal like yourself which you can get to know.

That's some of the background story.

And finally, when do you hope that it will be available to the public?

I'm hoping the game will be ready about a year from now, in time for the start of the 2015-16 school year.  Wish me luck!