A highlight of my favorite moments in gaming. This week: Tomb Raider!
by katlaborde

When the original Tomb Raider debuted in 1996, the game immediately garnered acclaim along with heavy media attention towards the game's protagonist, Lara Croft. I remember going to the book store, seeing Lara's picture on the front of all the popular gaming magazines. With over 7.5 million copies sold worldwide and critical acclaim, Tomb Raider paved the way for adventure games and brought us a legendary gaming icon.

Tomb Raider was actually one of the few games, the other two being Resident Evil and Final Fantasy VII, which brought me back into gaming. My brother rented Tomb Raider from Hollywood Video and I spent the next few hours playing it. I loved it so much, that he bought a used copy from Game Spot for me. Unfortunately, the copy was damaged as the bar would always get stuck right between Lara's legs on the loading screen for one of the Peru levels. However, since my brother is awesome, it was returned to Game Spot for a new copy, allowing me to finish Lara's first adventure.

Technically, the scene I'm referring to isn't the game's actual opening, but rather the opening scene to the Peru levels. Lara and her associate, an unnamed local guide, trek up a mountain towards a Peruvian tomb. Lara repels up the side of the mountain, hitting a button allowing the door to open. Suddenly, wolves emerge from the within the temple, killing Lara's poor guide. Like a boss, Lara cuts her rope letting herself fall all while shooting at wolves with her dual pistols.

So the graphics are really rough compared to today's standards and Lara slaughtering the wolves might be considered unethical, but this was the first display of female badassdom in gaming for myself. Even though her outfit in the scene is totally illogical for the environment, Lara takes charge instead of having to be rescued by a man.  It's female empowerment at its finest if you don't take the outfit into consideration. Plus the wolves totally killed that guy! They deserved it, right? Right?! During the second Peru level,  Lara discovers a giant pool in the middle of a huge room. As the player approaches the pool, they get one huge, furry surprise in the form of a massive bear! You don't even hear the bear coming, it usually gets one good bite into Lara before you notice it. The bear is freakin' ninja! Every time I entered this area,  I tried to mentally prepare myself for the bear attack. It never worked. The bear always managed to sneak up on me as I flipped around the room trying to get away from it.  On top of that, the bear takes about 500 shots with the pistol to kill. It is frustrating, but frightening, and one of my favorite moments from the game.

Someone should get that bridge fixed.

Still in Peru, Lara discovers a jungle area nestled away in the tomb. As if this isn't weird enough, Lara gets attacked by raptors shortly after entering the jungle. After dispersing of the raptors (they had their chance to live!), Lara heads deeper into the jungle where several loud rumbles are head. Then, emerging from the darkness in front of her, a large shape appears revealing itself to be a charging T-Rex! Lara must dip into a small alcove underneath a waterfall to evade its attack and pummel it with bullets. All logic aside, the addition of the T-Rex is pretty awesome. Hearing the sound of its menacing footsteps as it emerges from the unusually completely black background is weirdly exciting. Even better, Lara gets to add it to her animal hit list. 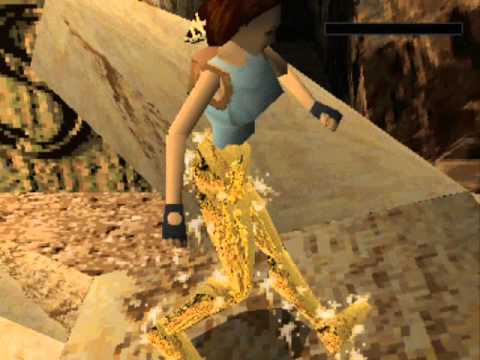 When Lara travels to Greece, she finds herself facing an unusual puzzle. She must take three lead bars, obtained throughout the level, and turn them into gold. How would someone do that? Well, fortunately, a statue of King Midas' hand allows just that to happen. But what if we put a small medical pack on his hand, maybe one of Lara's guns, or LARA HERSELF?! Because the developers are awesome, Lara can actually be turned to gold! I found this very amusing the first time until I figured out I did not save beforehand. I guess it can be classified as a sort of "Easter egg". Regardless, it is probably my favorite death in a video game ever.

Heading through Atlantis, Lara encounters a weird creature which mimics her every move. At first, its presence is jarring due to its freakish appearance. However, it is actually a unique puzzle. Lara must get rid of the doppelgänger by moving around the room in a way to where the doppelgänger will fall into a pit of lava. Once accomplished, Lara is free to move forward through the level. I alway thought this part was strange. The doppelgänger looks nothing like Lara, unless she was turned inside out maybe. Gross.

Do you have any favorite moments from Tomb Raider? If so, please share in the comments below!