You now can use real money with Xbox Live!
by Lui Galletto

The latest Microsoft update will release soon, with the biggest change being the retirement of the hated Microsoft points.

Instead of those rage inducing numbers (in desperate need of conversion), we now see actual prices listed next to items, that correlate to what country your Xbox 360 is registered in. Right now the list of all countries affected by this change ranges from the North America, most European countries, South America, Asia, and even the Middle East. Soon every country will have the points converted to their local currency. 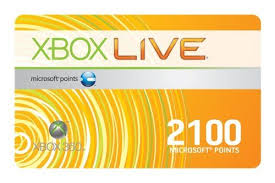 So long old friend, we never liked you.

"Well what about my existing points?" you may ask. Well Microsoft is planning on refunding your purchase "equal to or greater" the amount your points are worth. There are reports of people with less than $2 worth pf points being refunded as much as $7 at the moment.

The only drawback to this news is Microsoft will reclaim this refund if not redeemed in two years time. This might make people balk (as it should) but for many gamers, having a few bucks in your account gives you an incentive to purchase something you have had you eye on, but not enough Microsoft points to buy. Some prices (especially in European markets) will experience slight price bumps during the conversion process that will be equal to Play Station Network prices.

"Well what if I have unused codes and/or Microsoft Points Cards?" you ask me again, instead of looking towards the official page. Well my good friend, they say,

Go ahead and redeem them! Even after your account transitions, we’ll still accept purchased Microsoft Points Cards and codes until further notice, and we’ll add to your account an amount of local currency equal to or greater than the Marketplace value of those points. When you redeem a Points card or code, those Points will be retired, and your account will begin using your local currency instead. Microsoft Points cards and codes that you purchased and redeem after the transition will expire one year from the date the Points are redeemed.

Microsoft is issuing a lot of expiration dates unfortunately, but only on cash they are reimbursing you with. Any future purchases are safe. They also go into much more detail concerning how the cash and accounts will be handled into the future.

It is a welcome, albeit late, change. No more worthless points wasting away within your account, residing in a state of un-purchasable limbo. This update will also apply to all Window related products, meaning Windows Phone Store and Xbox Live will grace us with the new system.