We saw two landslide victories in the EU Semi Finals today, as two favorites prevailed and moved closer to the Grand Final round.
by Auverin Morrow

After a surprising set of matches and some serious upsets during the EU Quarter Finals round of the SMITE Super Regionals on Wednesday, the EU teams returned to the stage today to face off again in the Semi-Finals.

Both matches today were landslide victories. Once the favorite teams got started, they were unstoppable in their games and quickly shut the opposition down. In typical EU fashion, the play focus was on strategy, not outright aggression. So these matches were much cleaner than the ones we saw in the NA Semi-Finals yesterday, where both matches went to Game 5.

"Dignitas vs. Titan for the fifth place spot? If you predicted that, I will buy you a new hat. Two hats, even."

This was an interesting match-up. Dignitas was a favorite for Worlds this year, and Titan made it all the way to the Grand Finals round at the World Championship last year. No one expected to see both these times battling it out for the fifth place spot this time around.

In this Best of 1 match, Titan took an early lead. Knowing that they wouldn't quite hit their stride until late game. Dignitas bided their time and slowly closed the gold/EXP advantage Titan had. They started coming out on the winning end of team fights, and turned the tides completely when late game rolled around. A final push into Titan's base won the game for Dignitas.

In the Analyst Lounge before the first game, everyone pegged Epsilon as the favorite for this match, estimating that they'd close it out with a 3-0 or 3-1 set.

According to the commentators, Game 1 was "the most one-sided match we've seen all tournament". Epsilon took first blood and an early lead, then continued that momentum throughout the game to take 4 kills and a Fire Giant, effectively crippling London Conspiracy. We saw lots of clean plays and beautifully executed maneuvers from Epsilon in this game. They easily breached the base and took the first win.

Game 2 had a much better start for London Conspiracy. They had an extraordinary late-game composition. But they weren't quite able to stall the game as long as they needed to build up their characters, as Epsilon pushed to grab the Fire Giant at just 19 minutes. With a huge gold/EXP lead and essentially double the kills, Epsilon grabbed another snowball victory.

Epsilon grabbed first blood for the third time in Game 3. London was able to land a few kills early on, but Epsilon never let them retreat from an engagement without taking some kills for themselves. One commentator remarked that "everything has to be the last word for Epsilon."

"Everything has to be the last word for Epsilon."

London Conspiracy kept their heads above water for a little while, and managed to win their first team fight of the set later in the game. But it all went downhill when Epsilon went for the Fire Giant, and wiped out all of London Conspiracy in the ensuing team fight. Epsilon kept pushing each combat encounter, which eventually resulted in a 16k EXP lead and a 10k gold lead. They were sitting at an impressive 33 kills (to London Conspiracy's 14) as they took the titan and the game, guaranteeing their spot on the World Championship stage.

YES, our Smite team qualifies for the world's in January. A 3-0 win over @ldnconspiracy . GG to them! See you later for the finals!

Epsilon will move on to compete with Paradigm for the Grand Final victory on Sunday. London Conspiracy will return tomorrow to face Fnatic in the third place match. The winner of that match will move on to the Wild Card game that same day, which earns them another shot at going to Worlds.

Paradigm seemed to be the favorite going into this round, and Game 1 went in their favor. In spite of an early Paradigm lead, Fnatic gained the edge after killing 3 of their members. Fnatic snuck a Gold Fury, which gave them a considerable gold/EXP lead. Their strong mid-game composition helped them dominate for a good 30 minutes of the game, but they didn't shut it down quickly enough. Paradigm's composition had serious late-game strength, which turned the game in their favor. Fnatic put up a serious fight at their base, but it wasn't enough -- Paradigm brought down the titan and took the first victory.

Game 2 wasn't quite as back-and-forth. Paradigm picked up an early lead and dominated throughout the game, particularly in team fights. When we tuned into Fnatic's comms during these encounters, there was a serious lack of communication between them. Paradigm had a lot more synergy, and it carried them strong to the late game. The official Paradigm Twitter account (@paradigmGG) live-tweeted the best moments from the game:

We defend Gold Fury and then take 2; We then take Gold Fury for ourselves and disengage perfectly

We're looking strong in our fights right now! Can we keep it up? #PDGWIN

Game 3 was the crucial point in this set. Paradigm got the early lead, and it looked like they were going to march steadily on to the end of the game. But toward the mid-game, a 3-3 fight gave Fnatic the advantage in gold and EXP. Paradigm managed to make a 4-3 trade in their favor during the next encounter. As Paradigm tried to take the Gold Fury, Fnatic came to its defense. An overzealous move by Paradigm caused a little dissonance in the team communications, but ultimately they came out on top of the scuffle. They bumped heads in a 5v5 with Fnatic at the Fire Giant and wiped them out completely. Wasting no time, Paradigm rushed directly to the base and made quick work of the titan. They nailed the win and secured their spot at the SMITE World Championships in January.

We steal Fire Giant and wipe the whole of @Fnatic WE ARE AT WOLDS! GG to Fnatic #PDGWIN

Paradigm will be moving on to face Epsilon in the EU Grand Finals on Sunday. Fnatic has been dropped to the third place seat, and will battle it out with London Conspiracy tomorrow for the Wild Card game and another chance at making it to Worlds. Here are the brackets: 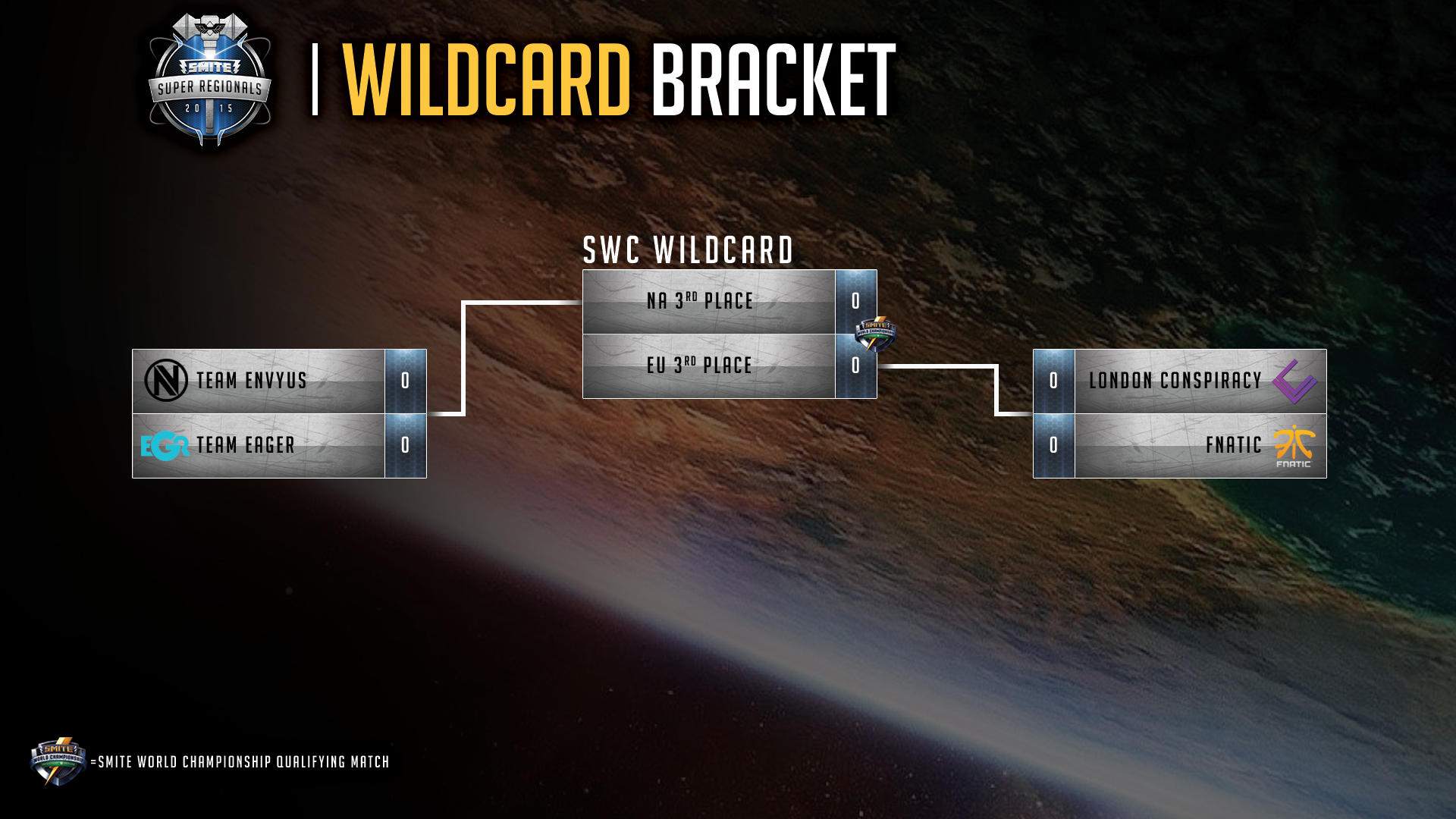 Tomorrow, November 21, we'll see the third place matches for both the EU and NA teams. The winners of those matches will meet in the Wild Card round, where a seat at the World Championship will be at stake.

After these games, we'll go into the final day of the Super Regionals to watch four teams battle for the $70,000 Grand Final prize.

To keep up with the action, tune into the official SMITE Twitch channel, or follow @SmitePro on Twitter. And stay tuned to GameSkinny for all your SMITE Super Regionals coverage as we move into the last two days of the event.