Arcades have always been places of wonder. Within those bewitching neon caves stood cabinets that ate our quarters and fed our imaginations.

Though many genres of games made their homes within arcades, one has gotten a great deal of love from indie game developers as of late: the twin-stick shooter. The name is fairly self-explanatory; a twin-stick (also often called top-down) shooter makes use of two joysticks: one for movement and the other for aiming/shooting, utilizing a top-down perspective to allow for omni-directional movement.

Unlike many other arcade shooting games, these titles offered infinite ammo in exchange for upping the number of enemies on screen. The idea more or less what that the player would need to play methodically to eliminate all of their enemies at their own pace; rather than being a sheer test of timing, aim, and ammo management. It's this chaos of mindless yet smart gameplay that made games like Smash TV such cult hits.

For the uninitiated, Smash TV is the granddaddy of all twin-stick shooters. On a basic level, it pitted players against massive waves of rival contestants in a twisted life-or-death gameshow ala The Running Man. Levels were broken up with scoring screens that showed the marvelous prizes the player has earned thus far. That is the spirit of twin-stick shooters. Yes, the thrill of the gunplay makes for a solid experience of its own, but it's the spirit and tone of the game that wrap it all together. It's this reliance on story that makes this genre so well-suited for modern indie titles.

With all that said, there are quite a few twin-stick shooters on the market, so let's take a look at some of the best and most popular titles in the industry today.

*Fair warning, some find it difficult to actually play twin-stick shooters with actual twin sticks (IE, left and right analog sticks on a controller). If mouse and keyboard is more your speed, by all means give it a try.

The list has only just started, but already we have a massive deviation from the original twin-stick formula. Taking place in a dystopian future where "democracy" reigns supreme (and infinitely expands and destroys in its quest to continue to do so), Helldivers eschews the original arcade feel of the genre with a tactical, objective-based gameplay formula.

The goal of this squad-based game is to capture points, destroy enemy nests, and/or complete a host of similar localized objectives before calling in a dropship to extract the team and end the level. 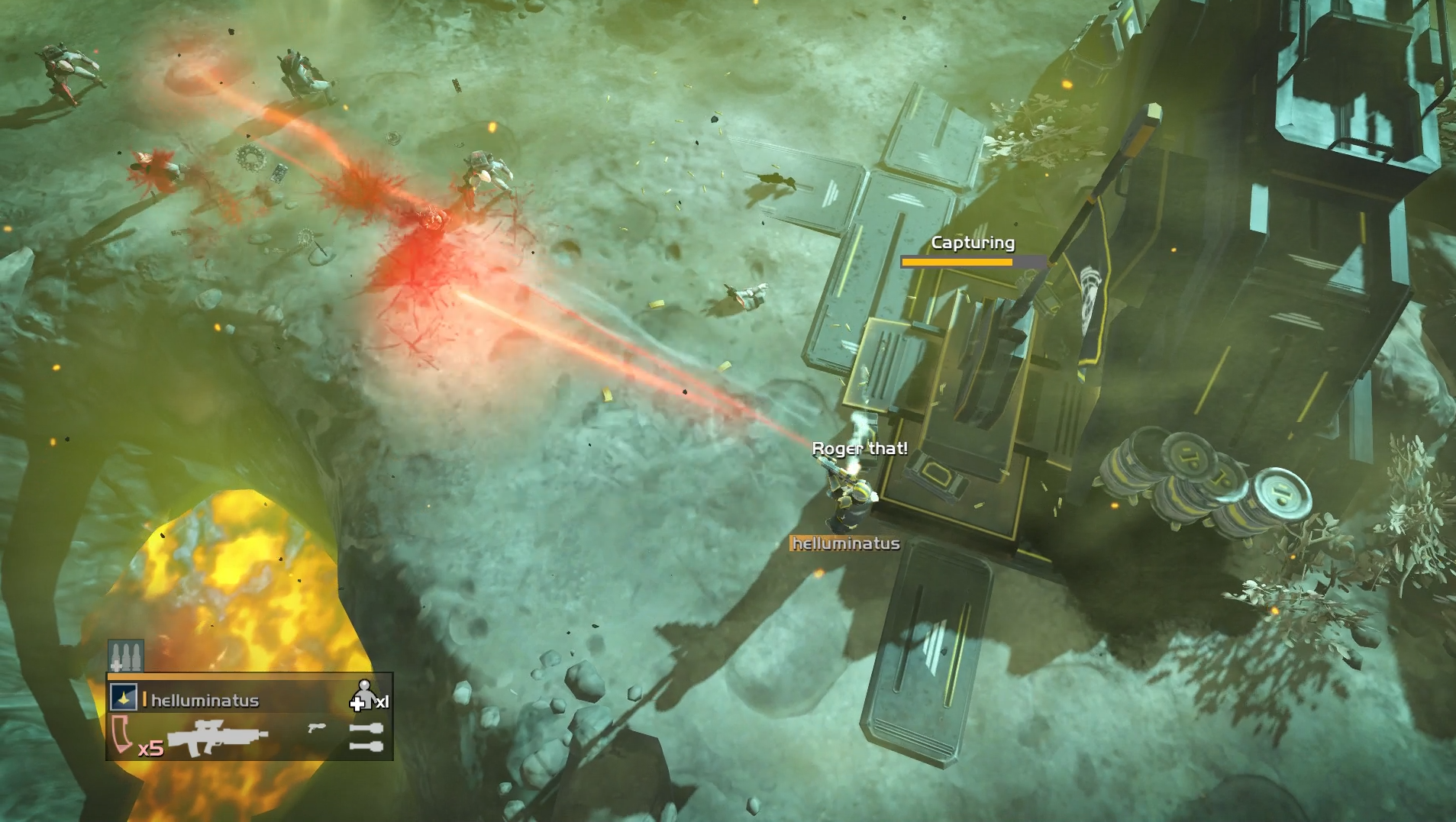 Unlike others in its genre, Helldivers actually makes it possible to run out of ammunition. Enemies also spawn in infinitely, so it is in the players' best interests to complete the objectives as quickly as possible.

However, to make up for this, players have access to "stratagems," supply drops of varying uses, such as ammo or sentry turrets. These strategems must be called in from a menu by inputting a code specific to each drop, leaving the user prone to enemies in the meantime.

That moment when you're desperately trying to input the code for a sentry turret or an ammo resupply is the finishing touch that shows that Helldivers is truly in touch with its roots. 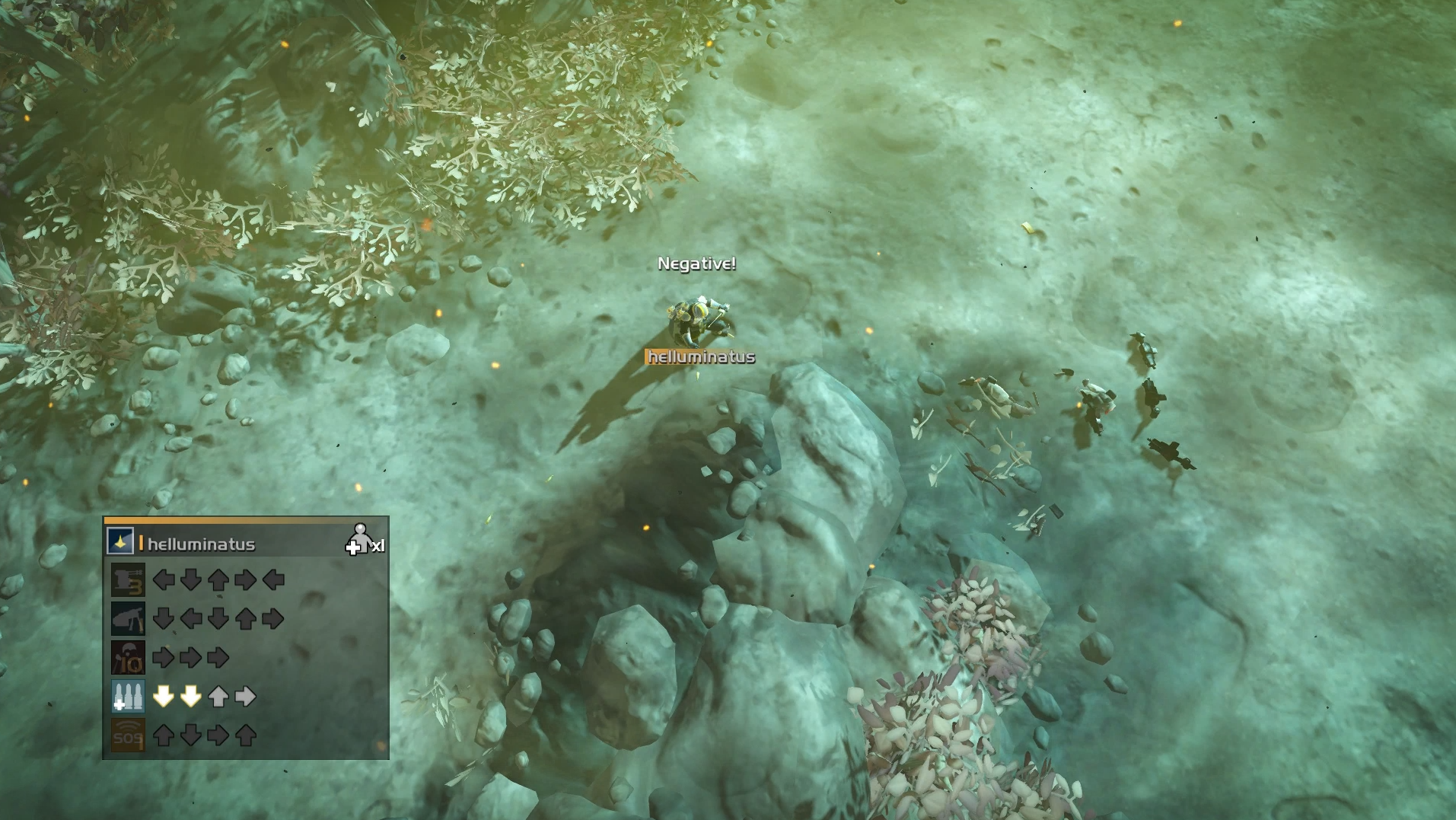 Rather than putting the player in a room and telling them to kill everything they see, Helldivers dares to promote restraint. Enemies will never stop coming, so it makes little sense to fire on everything that moves (not to mention that friendly fire will make short work of innocent teammates if one is not too careful).

However, objectives and extraction points attract waves of enemies, creating that high-intensity gameplay paramount to the genre.

The number of top-down roguelike games is always increasing, but few are held in as high esteem as Nuclear Throne. With simplistic art, solid gunplay, small procedurally-generated levels, no-nonsense weapons, and fun characters, there was little doubt that this title was bound for greatness. 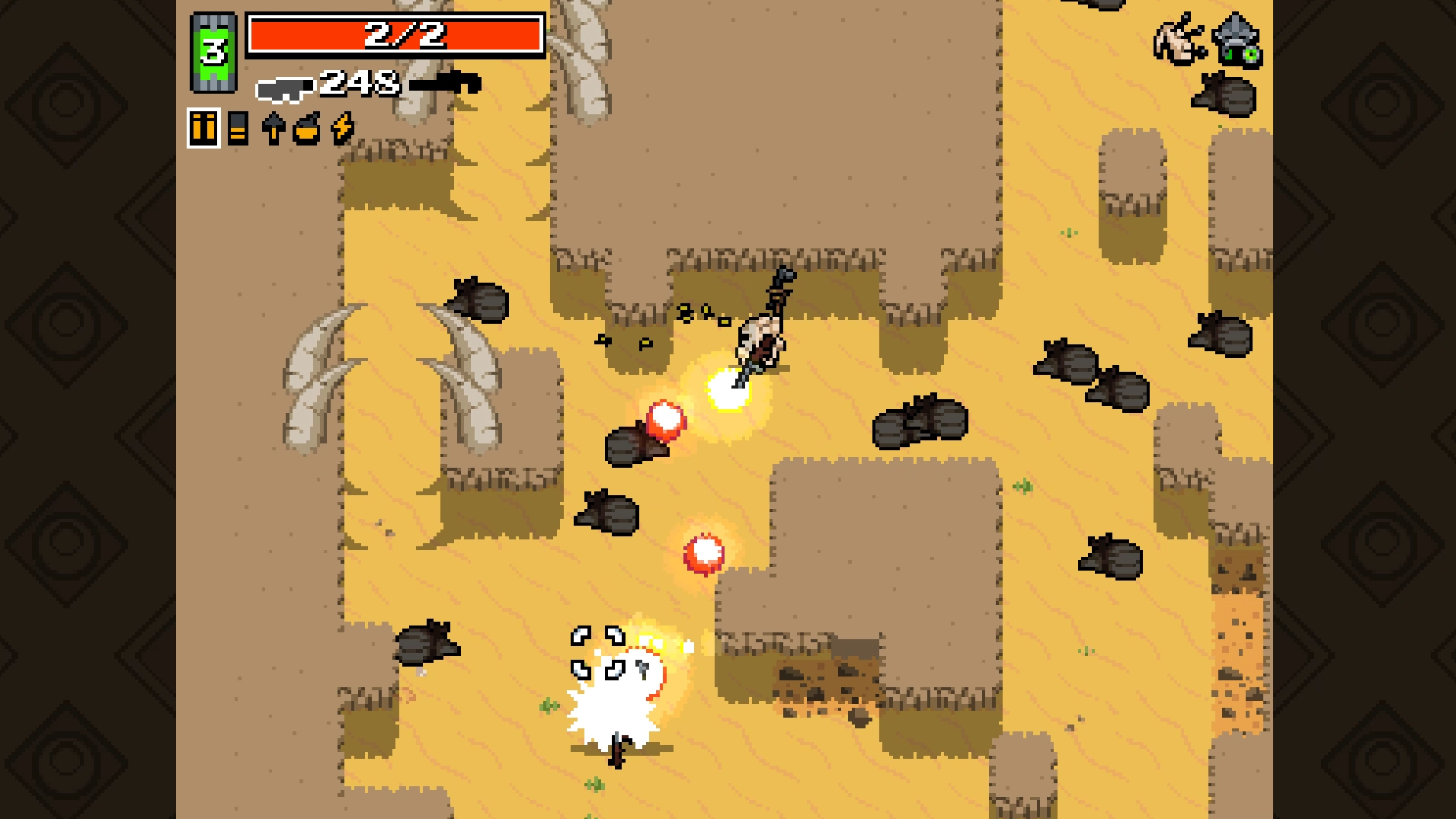 Taking place in a post-apocalyptic wasteland, Nuclear Throne tells the tale of various mutants on their journey through the hostile wastes as they search or the Nuclear Throne, which is said to be able to bring peace to earth once again.
Along the way, our heroes must make use of any weapon they find in their path; be they guns, simple tools, or even stores of radiation to accelerate mutation and gain new abilities from it.

Much like Helldivers, ammo is limited here. However, munitions are easily found throughout the wasteland and are not likely to become much of an issue if the player doesn't get too attached to any one weapon they're using. This combined with the smooth flow of the levels gives a more arcade-like feel due to frantic shooting and regular weapon swapping (in lieu of consistent weapon powerups in arcade titles). 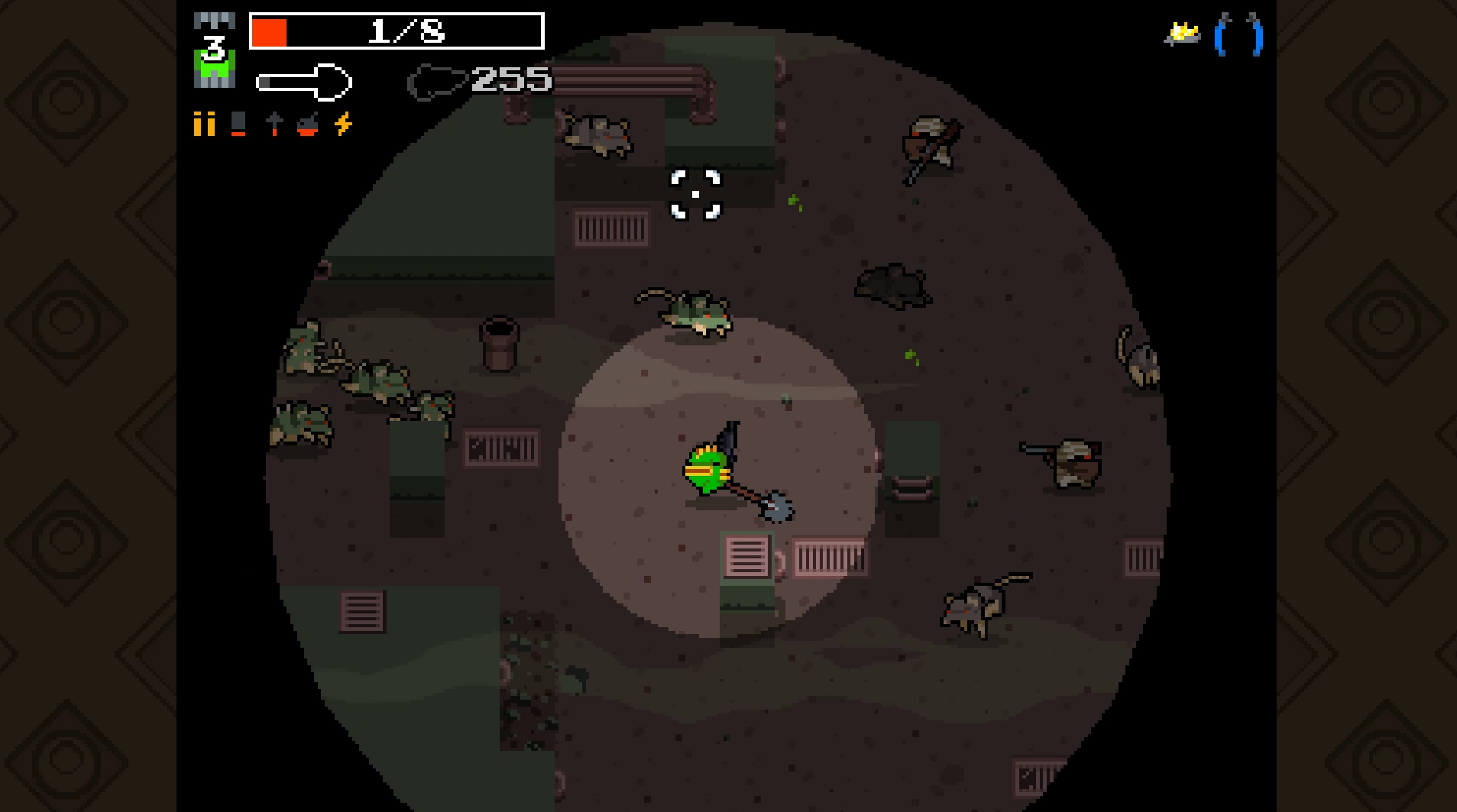 Sweet and simple, Nuclear Throne offers the fast-paced gameplay of the twin-stick genre with the variance and replayability of a roguelike to create a unique experience.

Aesthetic in the extreme, Enter the Gungeon is absolutely obsessed with guns. Many of the enemies are bullets, life is measured in crossed bullets in the shape of hearts, shell casings are used as currency, and every boss has a gun-related pun for a name.

The game follows the exploits of four gungeoneers come to claim the Gungeon's greatest treasure: a gun that can kill the past. It is with this gun that each of our intrepid heroes hopes to erase the greatest misfortune in their lives. 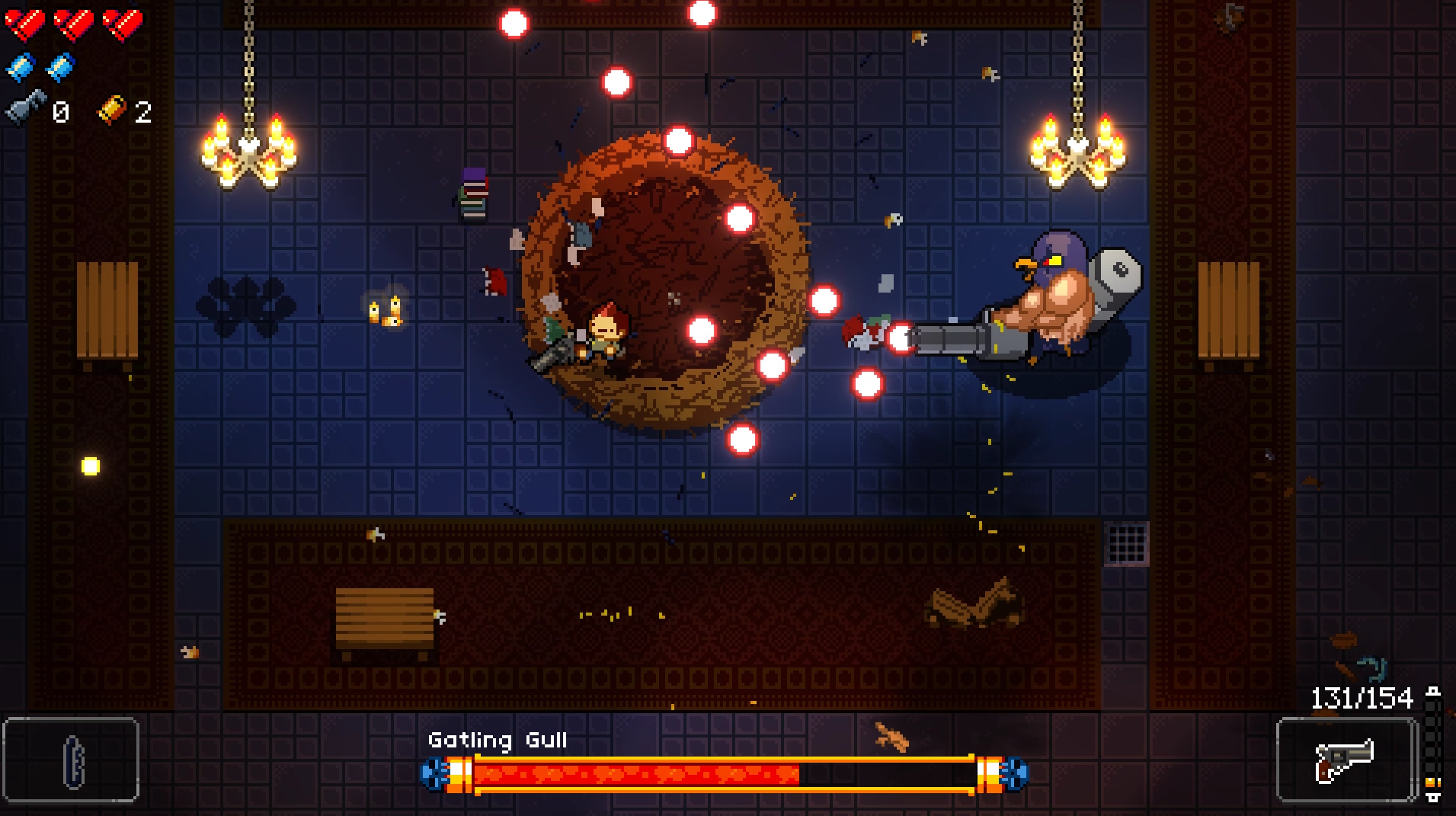 Generally seen as the yang to Nuclear Throne's yin, Gungeon's gameplay is slow and methodical like a proper bullet hell. Furthermore, where Nuclear Throne was centered more on interesting and diverse characters, Enter the Gungeon's primary concern is exotic weaponry, like a gun that shoots eggs that hatch into a cluster of bullets, or a mailbox that shoots letters (and letter bombs). 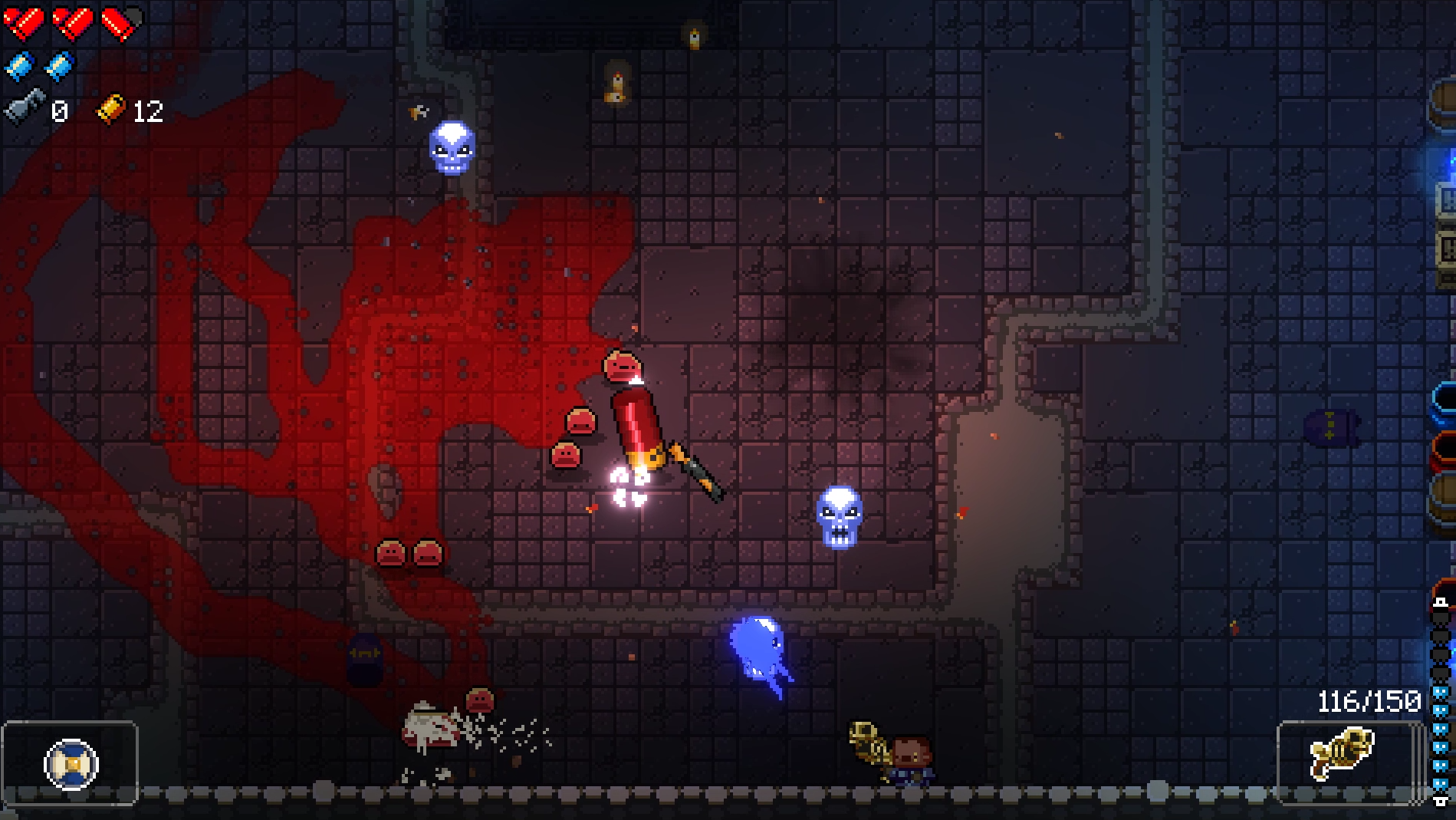 Though Enter the Gungeon is primarily a roguelike, certain measures are taken into the game design to replicate an arcade experience. For example, ammo is limited for all guns except for each character's starter weapon, and any dropped items left unclaimed will be stolen by the next time the player comes around.

At first this looks like a simple way to prevent power gaming and micro managing, but it also replicates the fleeting weapon and health pickups rooted in the genre's arcade origins.

In short, Enter the Gungeon is a love letter to twin-stick shooters, arcade roguelikes, and of course, guns.

Here we have a game that needs little introduction.

The tale of a young boy running from the mother who believes God has told her to sacrifice him; The Binding of Isaac Rebirth is top dog in the roguelike genre. From the progressively more satanic imagery to the massive list of items and collectibles, this game leaves little to be desired. 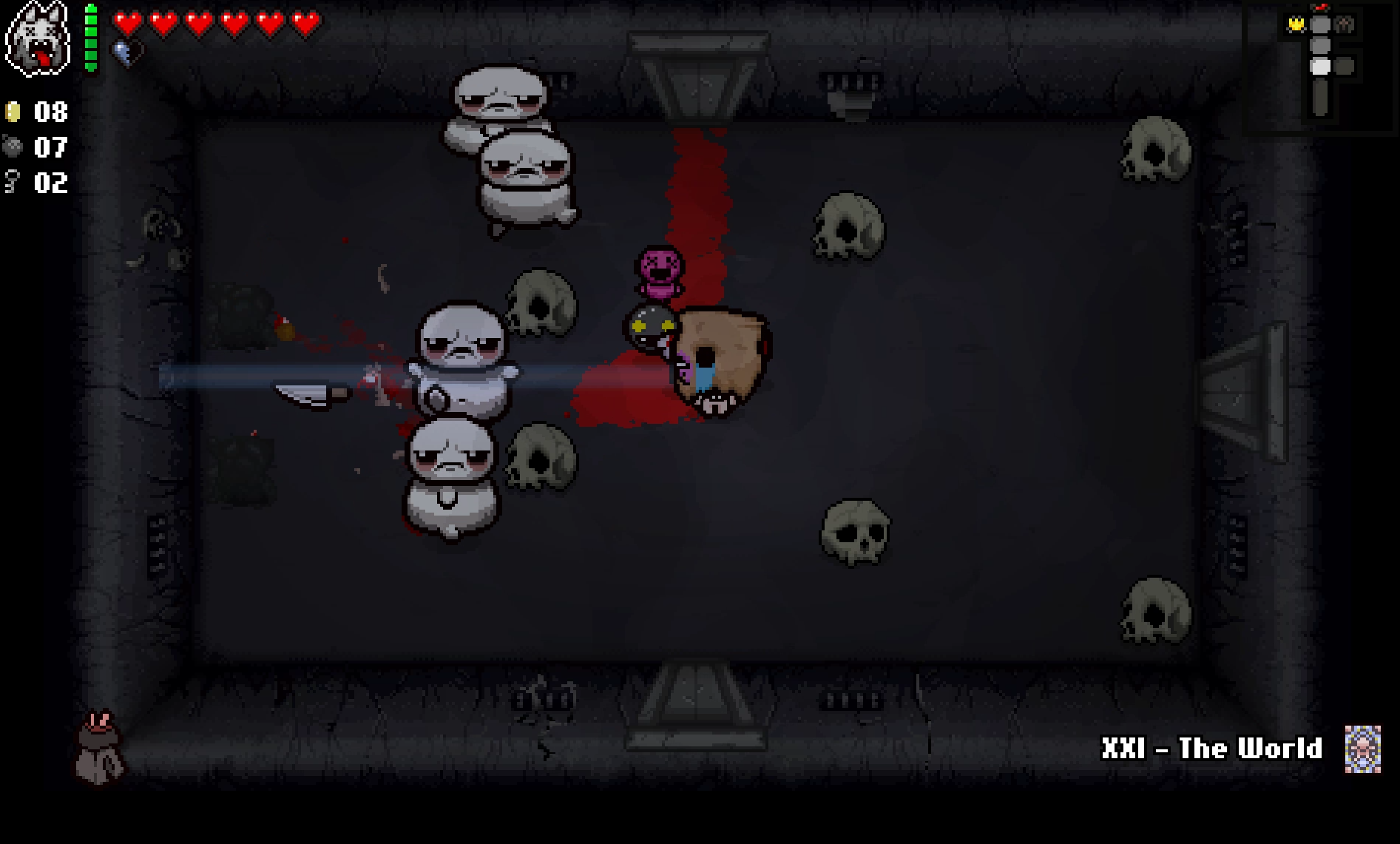 However, despite the gameplay being fluid (although slow at times), the shooting mechanics aren't what keep people coming back (at least not entirely). One of the more attractive aspects of The Binding of Isaac is the sheer amount of fan theory around it.

Is Isaac's mom crazy? Why is Isaac's dad not in their lives anymore? Is what Isaac is seeing real, or is it just how a terrified child sees the world around him? Did he even go into the cellar at all?

It's questions like these that add to the intrigue of the game and drive players to keep coming back to find every secret there is in hopes of uncovering another piece of the truth. 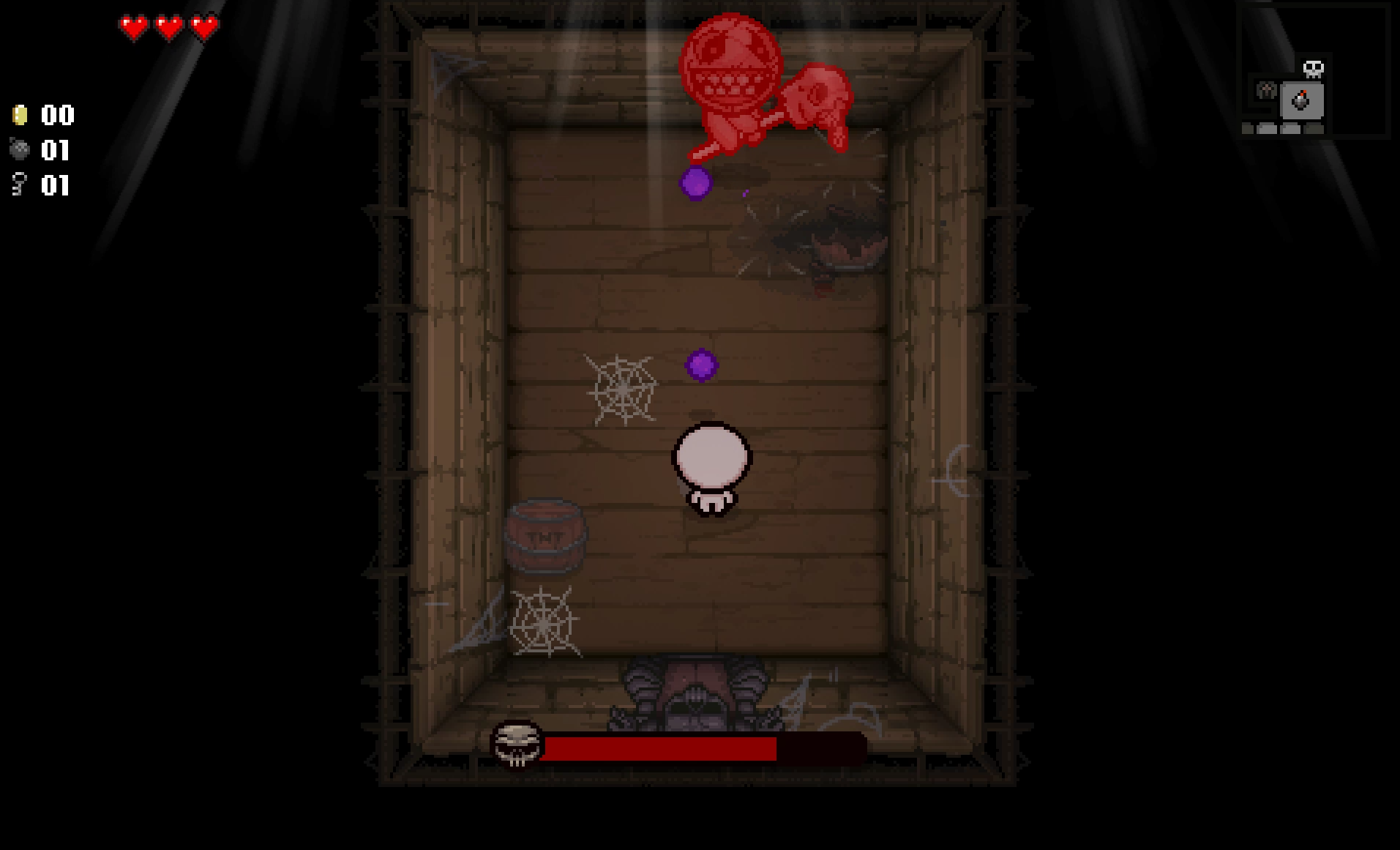 The Binding of Isaac Rebirth was a strong competitor for the number one spot on this list, but ultimately a heavy reliance on stats gained from items and modifiers pushed it deep enough into roguelike territory that it loses touch with the twin-stick genre, and that's why the number one spot must go to...

Lauded as the king of the twin-stick genre, Assault Android Cactus pits a host of chibi androids against a rising tide of a full-scale robot insurrection.

Nearly every detail is fashioned after its arcade predecessors: massive waves of enemies (with more than a singe wave per screen) random powerup drops, bullet hell boss battles, infinite ammo, and co-op play.

In lieu of random weapon drops, each android has access to a primary weapon and a secondary heavy weapon that must cool down after a certain amount of use. As such, Assault Android Cactus relies more on the individual strengths of each character and synergy between the character choices of all players (up to four local). 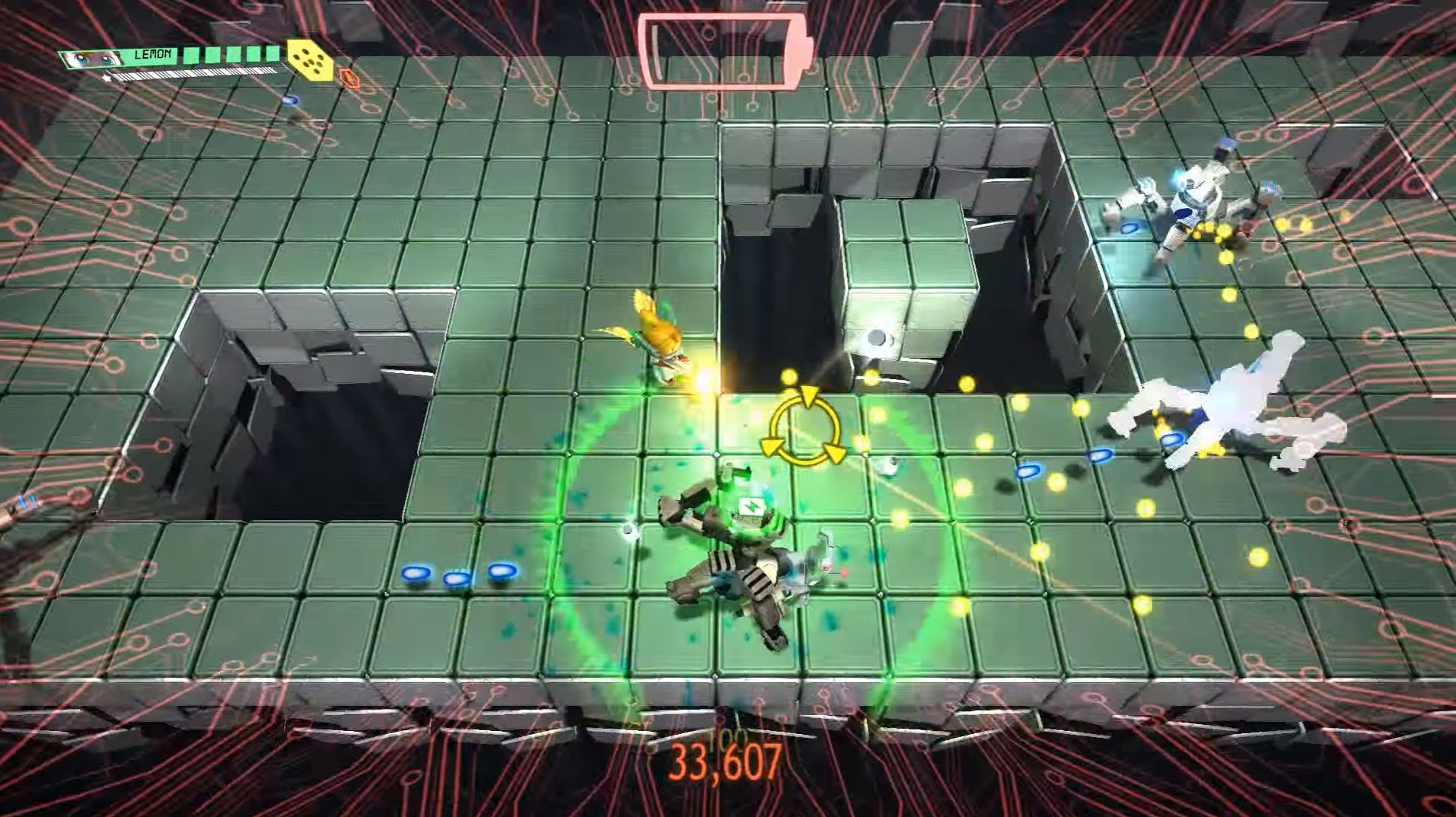 The gameplay is fast-paced and chaotic, and though off-putting at first, the art style is easy to appreciate. Environments range from sterile machine rooms, hazardous engine rooms, to self-generating tile floors in an infinite void. This brings great variety to the admittedly low number of basic enemies in the game.

Even the characters, whose weapons range from assault rifles to remote-controlled rotor blades to even drill-lances make sure that there are many ways for the game to be played. 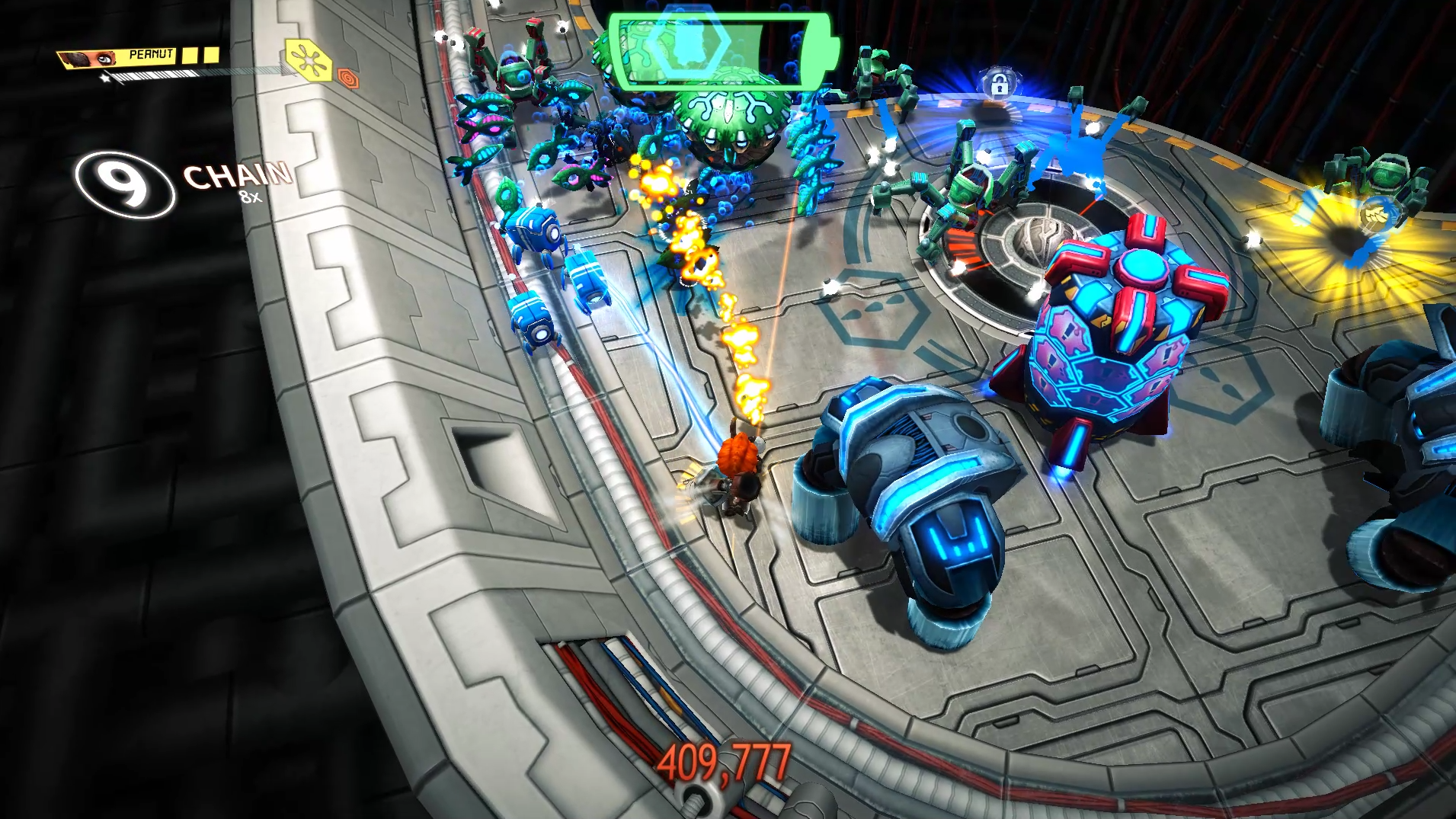 It may not have the deepest story or even the most interesting gameplay mechanics, but if nothing else, Assault Android Cactus is more loyal to its genre's origins than any other title out there (of this quality and caliber at least).

So these were our picks for the best five twin stick shooters available.

Did we get the best ones for our list? Care to disagree? If you have some suggestions, let us known in the comments below.