These games are so bad they make me wonder if quality control even exists in the mobile gaming space -- and if mobile gaming is doomed to fail.
by Dan Roemer

Prior to the age of smart phones and the mobile gaming market as we know it, if a television or movie studio wanted to make a video game tie-in, they would aim for the only obvious market -- the console market. Because of this, that game would actually have to be a full fledged $30-60 retail game. Now sure, some of these were absolute trash...but some were absolutely great.

Big properties such as The Simpsons had a plethora of incredible licensed games, such as the 1991 arcade game, The Simpsons: Hit & Run. Even the 2007 game cartoon tie-in, simply titled The Simpsons Game, was fairly well received alongside its brethren.

With the modern mobile gaming market seemingly being the home for third party licensed games, Matt Stone and Trey Parker, alongside developer Obsidian Entertainment and publisher Ubisoft, broke away from this trend and released a full fledged $60 retail game known as South Park: The Stick of Truth -- and it was fantastic.

But What About that Guy, You Know, the One with a Family? 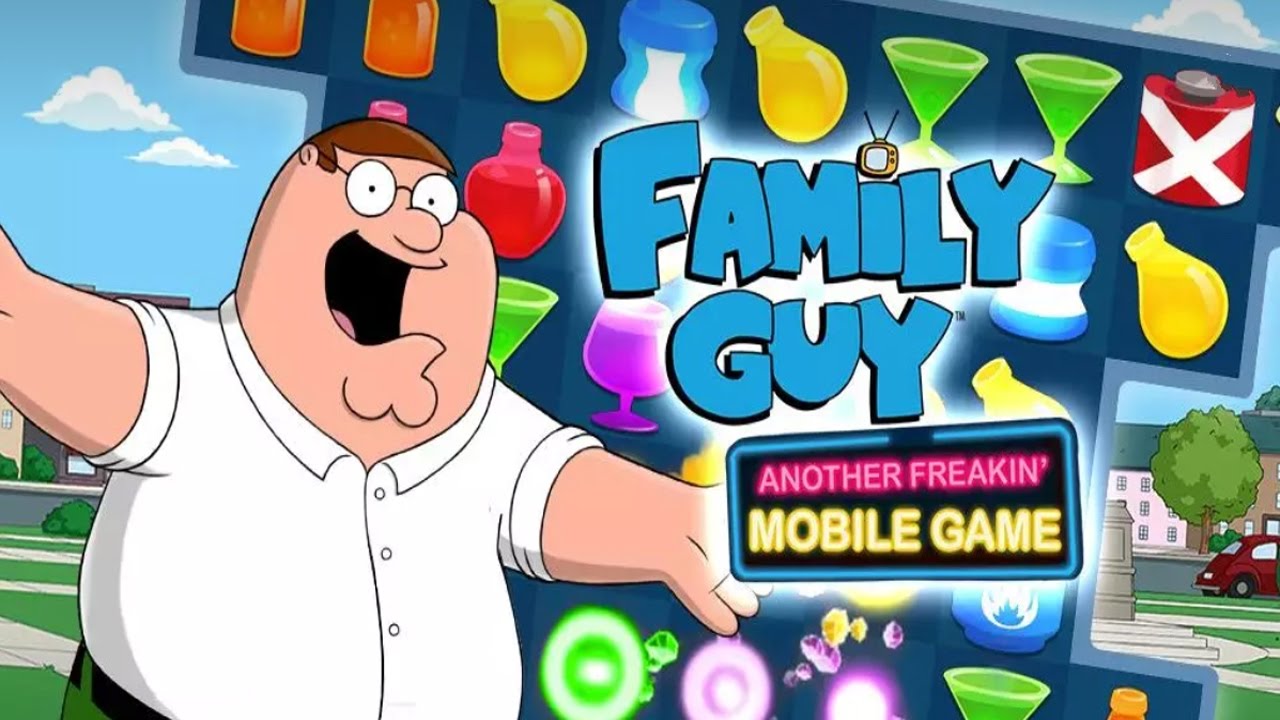 So how does a well-established cartoon series such as Family Guy, which has been going strong for 18 years and doesn't seem to be slowing down, not have a single decent video game under its belt? No seriously, name one. For whatever reason, Family Guy hasn't produced a single noteworthy video game that's received even decent grades. Knowing that, it shouldn't shock anyone that Family Guy: Another Freakin Mobile Game falls into the same category as its peers -- dookie.

Even the name of the game itself is somewhat questionable. Were they trying to be meta or something? Was it all a gag? Wouldn't it be funnier if they actually made something competent, and then naming it Another Freakin Mobile Game as a big swerve or punchline? Maybe the joke was (and still is) on me -- playing it full well knowing already what to expect.

As for the actual game itself, it's another match three type with some minor differences. You simply need to match the colors of the drinks, condoms, or other objects to progress to the next level. You're scored on a three star system depending on how many moves it took for you to complete the lever -- or what your score was for each level.

The main story of the game revolves around Peter deciding to start a bar-on-wheels sort of deal, driving around delivering booze around Quahog to those in need. Of course, the game itself doesn't feature any actual voice acting, everything is delivered in speech-bubble format, with sound effects thrown in here and there, probably to keep the budget as low as possible -- matching the level of the game's quality.

It does have some novel ideas, to be fair. There's a boss fight where you have to match a certain amount of blocks in order to damage the boss, but these interesting scenarios are few and far between. Each time you win a level, you'll receive a unique winning animation of random characters doing a dance or something of the sort -- but trust me, you'll be seeing the same animation a lot. I lost track of how many times I saw Stewie doing the exact same pose and dance after beating a level.

Oddly enough, the same applies to each loading screen: you'll see the exact same loading screen telling you, “Make bigger matches to collect power-ups”. I honestly don't think the game has any other loading screen than this one; I've spent hours playing and haven't come across a different one. It's like they originally intended to place different tips on each screen, only thought of this one, and gave up. The game is also plagued with a number of crashing issues. During my few hours spent with Family Guy: Another Freakin Mobile Game, it crashed roughly 4-5 times on my iPad Mini 2.

I honestly can't recommend this game to anyone. It features nothing noteworthy in terms of fan-fare, and it doesn't have enough depth to be a decent match three game. I breezed through 25 levels without any challenge and was getting three stars on every level. This is just another game to add to the pile of garbage and mediocrity that is the current list of Family Guy related video games.

"We're About to Sail Into a Shit Typhoon, Randy, So We Better Haul in the Jib Before it Gets Covered with Shit" 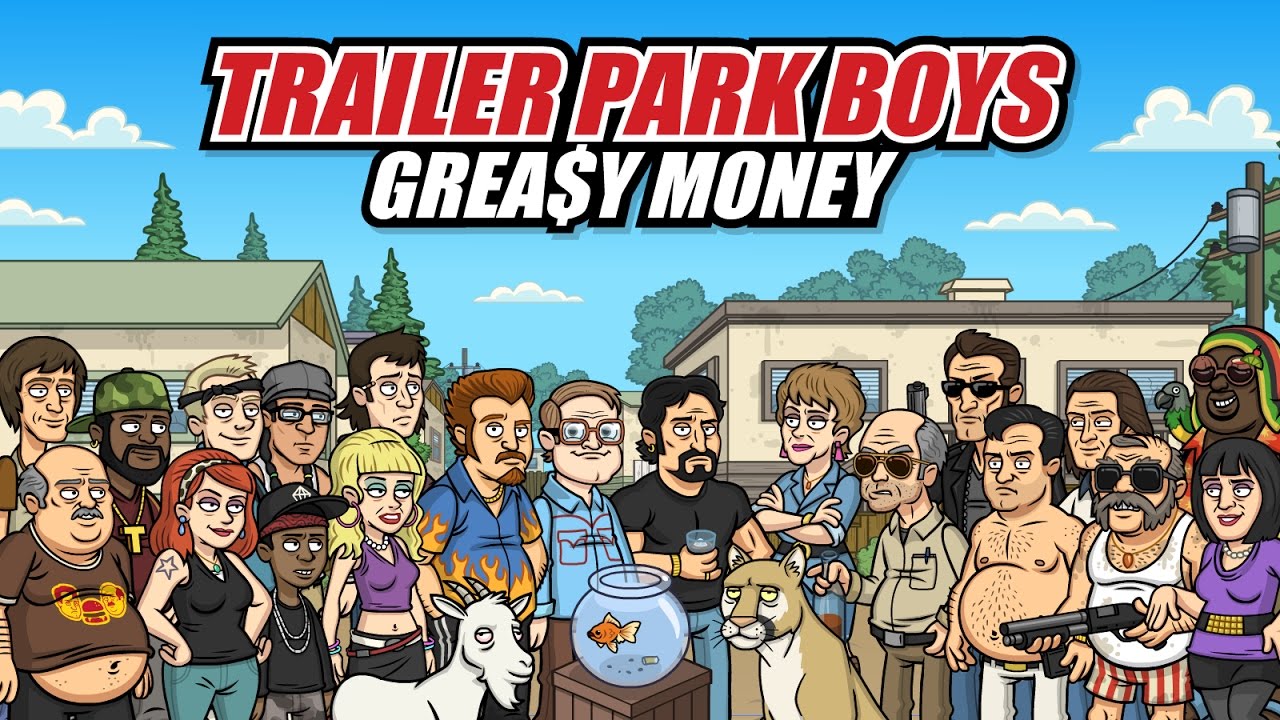 Trailer Park Boys is a guilty pleasure of mine. As a Canadian, I've been watching it since I was a kid. In recent years, I'm proud of the boys getting creative control over the show and the Netflix deal being a huge success. We've been getting more Trailer Park Boys than ever before, and they've hit massive mainstream exposure outside of Canada.

Which in turn has allowed them to push out tons of new merchandise and their very own mobile game, Trailer Park Boys: Greasy Money, which seems to only nail the low budget aspect of trailer park boys, but doesn't come close to the level of quality. Is it a match three game? No, it's worse -- it's a tapper.

Despite the lack of voice acting (once again), the writing in this game is a huge step up from Family Guy: Another Freakin Mobile Game. It was the only real thing that even kept me playing or coming back for more.

The story revolves around Ricky pissing into a jug, which he accidentally throws into a maple syrup truck, thus ruining the Canadian economy and making the dollar almost worthless. So, they begin to scheme new ways to make massive amounts of money.

The game starts off easy and quick enough, with each set of goals broken up into “seasons” that mostly involve getting X built, getting X amount of customers, or getting X amount of money. Once done, you're greeted with more dialogue and a “boss fight” -- which is more or less just tapping away at the screen some more.

Then the boys get thrown in jail for the millionth time and a new season begins. You once again rebuild your different, greasy money making contraptions, such as stolen gasoline, the dirty dancer, or Bubble's iconic kitty daycare to name a few. Then you begin tapping away to collect things once more or let that "dum dum" Cory collect it while you sit there or turn your phone off.

However, the biggest problem is once you hit season 3 and beyond, the game grinds to a halt in terms of story progression. So much so that completing a goal can sometimes take up to four hours and beyond to finish. Which is where liquor and hash coins come in (the in-game currency), which allow you to speed up time and buy other in-game goodies. You can either buy these with real money, complete side objectives and goals within the game, or watch some ads and do surveys.

Once again, I honestly can't recommend this to fans of the show. It just becomes a slow crawl of boredom past the first two seasons, with goals taking hours on end to complete. Now obviously, you're supposed to just “come back later” or buy hash coins and liquor -- but the key problem is that there isn't much to keep you actually coming back.

Is Mobile Gaming Doomed to Nothing but Mediocrity? Back in 2012, I genuinely thought the mobile marketplace would be the next “big thing” in terms of hand held gaming -- and long term, it would be the foreseeable future of it, replacing hand held consoles altogether. With phones getting more and more advanced in their hardware specifications, I thought for sure we'd begin to see noteworthy games popping up, games rivaling those on console or PC.

Now sure, there are a few games on mobile that managed to achieve a lot in recent years. But I'd argue almost 90% of the mobile gaming landscape is comprised of Pokemon GO, Minecraft, and Flappy Bird clones, clickers/tappers, and match three games. The remaining 9% comprises weird, mostly broken indie games, while the remaining 1% is comprised of decent video games, which in most cases, are usually ports of existing games on other hardware.

However, now in 2017, five years later, I honestly question whether or not mobile gaming will ever progress further than where it is now. With video games achieving so much in recent years in terms of innovation, from delving deep into subject matters and life experiences like That Dragon, Cancer, the best thing mobile gaming has managed in these five years is making me go outside to catch Pokemon for a few weeks.

If you ask gamers today what they think of mobile gaming, the most common response and outlook on the platform is negative. That negative stigma has grown, so much so that when you have a huge property like Family Guy get its own mobile game named “Another Freakin Mobile Game” -- it honestly leaves me wondering if mobile gaming is truly doomed to fail in the long term. The lack of quality control and developers disregarding it makes me think so.

Games like Family Guy: Another Freakin Mobile Game and Trailer Park Boys: Greasy Money are just more games adding to this ever growing stigma, and each shows a blatant lack of quality from both the market itself and professional developers.

But what do you guys think? I'd love to hear your own thoughts in the comments below, but for everything mobile gaming, stay tuned to GameSkinny!