Action. Adventure. Vikings! What more could you want in a side-scroller? Trial By Viking may just be the game you're looking for.
by Jessa Rittenhouse

Side-scrollers are a mainstay in the world of video games. Everyone has played one, whether you cut your teeth on the Super Mario Bros. or Sonic the Hedgehog games as a kid, or were drawn into the genre in recent years by visual stunners like Ori and the Blind Forest or Dust: An Elysian Tail.

With so many side-scrollers out there, just how can a new one stand out? The answer: vikings. In the crowdfunded gem Trial By Viking, indie development studio Last Life Games gives the genre a fresh new look and tons of amazing features that will make you fall in love with side-scrollers all over again.

I recently interviewed developer Dustin Hendricks and asked him why you should make Trial By Viking the next Kickstarter project you toss some hard-earned cash at. 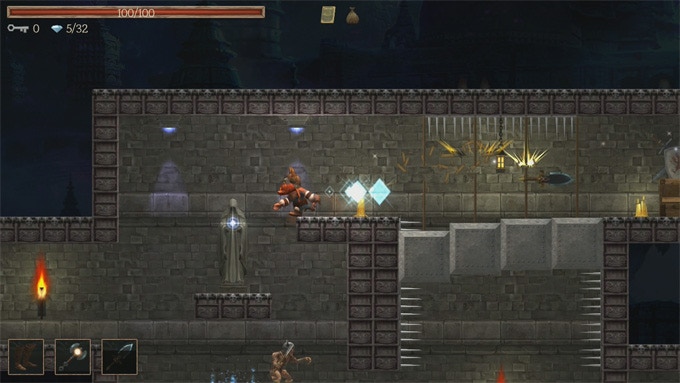 Delve into the world of Norse mythology in Trial by Viking, which brings you all the best elements of side-scrollers and dungeon crawlers in one beautiful game.

Jessa Rittenhouse: What inspired you to make Trial by Viking? What are your influences in creating a game centered around a Viking character?

Dustin Hendricks:  I have always had a love for vikings and Norse mythology, but what really planted the seed for Trial by Viking is a television show called Vikings on the History Channel. There is this dark but playful atmosphere they were able to create on the show by combining the more supernatural elements of Norse mythology and the historical notions of these great Viking characters. The characters are particularly interesting to me, and I believe they derive a lot of that from the mythology. Ragnar on the show is very similar to Odin for instance, who was the wisest of the Norse gods, but also often used deception and misdirection to achieve his goals. He was sort of an antihero in a way. With that kind of character as one of the main orchestrators within the game, you can go so many interesting directions with the story writing, and that's pretty exciting as a game developer.

JR:  Your Kickstarter page mentions the characters you'll meet on the Viking's journey, including a Valkyrie and a viking spy girl. Are these playable characters, or just NPCs? Is there a playable female character? What led you to that particular decision?

DH:  Throughout the game there will be levels where I try to switch up the fundamental rules of play to keep things interesting. For instance, there are some levels where your friend who is a Valkyrie will swoop you up, and all of the sudden you are steering her flight, flying swiftly upward as you try to dodge hazards and collect sunstones. So the Valkyrie is not a playable character exactly, but she definitely plays a part in the game play. The Viking spy girl, Kara, is a playable character, but for a hand full of specific levels. She has her own unique set of skills, and adds some variety to the game play as well. I feel like women characters sometimes don't get the greatest roles in games, so I wanted to be sure to create some really strong and cool woman characters for Trial by Viking that play a major part in solving some of the game world's biggest challenges. Stories seem to come out much more interesting when the heroes come in all different shapes, sizes, colors, and genders.

Danger and excitement abound in this Kickstarter Staff Pick.

JR:  What would you say is your target audience for Trial by Viking?

DH:  I think there is a little something for everyone in Trial by Viking, but it will definitely be geared toward the action crowd. With a ton of effort having gone in to tuning a very tight platforming feel, I am hoping fans of Metroidvania, Rogue-Likes, Super Mario Brothers Wii/U, Super Meat Boy, and Spelunky will champion the game when it gets released.

JR:  What do you think sets Trial by Viking apart from other sidescrollers?

DH:  There is a variety of things that I hope will set this game apart from other side-scrollers. The aesthetic is fairly unique. There aren't many side-scrolling games using orthographically projected 3D rendering, as opposed to 2.5D or pixel art. I also think Trial by Viking is a distinct blend between action platforming (like Super Mario Brothers) type games where you are running and jumping in a mad dash to the finish, and more Metroidvania-style games where you are exploring dungeons and hunting for treasure. I try to switch back and forth between these two styles of level design to keep the pace interesting, and the combination has also lead to a huge variety of interactive objects for players to play with within the levels. The story is a bit more elaborate than your standard side-scroller as well, with opportunities to make narrative decisions that steer the game in certain directions.

The thing that changes the feel of the game the most for me however, is the way the upgrades work. You are collecting these sunstones on your journey which you use to gain upgrades for your character that are going to help you get stronger, as well as access new areas of levels. So you might gain the bombs to open a passageway, or the grappling hook to reach a particularly high ledge. Each sunstone has a specific location within the game world, and once you get that sunstone, you can't go back and get it again. You can however see what percentage of each level's sunstones you have found already, and choose to go back to older levels and find ones that you may have missed. This adds a heavy treasure hunt element to the game that makes you want to explore each level to the fullest. There may be points in the game where you have to choose between taking on this tough puzzle or challenge within a level to gain more sunstones, or to just finish the level and guarantee you will get to keep what you have found so far.

Filled with stunning graphics, a rich story, and amazing music, how could this game get any better? By adding your voice to one of the characters as a backer reward!

JR:  One of your backer rewards includes the opportunity to voice a character in the game. What inspired that particular backer reward?

DH:  I think part of the fun in backing a project on KickStarter is that you are helping build, and sort of becoming a part of this creative thing. Your contribution ends up in the foundation of that project, and will live on there forever. Adding your voice as one of the characters is sort of following in that same vein, but on a higher level. I just think it would be so cool if I were able to share one of my favorite games with a friend, and then be able to say something like, "Oh yeah, and one more thing, I did the voice of those little frost ghouls that you're going to hate so much."

JR:  What have been your greatest challenges in making TBV so far?

DH:  The number one challenge for indie game developers like myself is almost always going to be trying to generate awareness for a game they are working on, especially since we are usually working with very small budgets. I love working on games, but I dread doing marketing for them. Without marketing though, your game will only ever be played by a handful of people, which in turn makes it difficult to fund development of further games in the future.

When you are outside of the industry, you can almost get the impression that you are aware of most of the new games that are coming out each year, but there are 5 to 10 games released on Steam every single day, and 300-400 games released each day on mobile platforms. I think the constant influx of new developers is ultimately a great thing that's going to bring a lot of variety to games, but at the same time, it's tough to get noticed when there are so many of us out there. You just have to try to make the best game you can, do as much guerilla marketing as you can, and hope the players who are excited about your project will help spread the word.

I think that's how Trial by Viking was able to get through Steam Greenlight in 7 days, and get chosen as a Staff Pick on KickStarter. I was really humbled to see so much support for the game from people all over the internet when I initially released the campaign trailer videos. There is still a huge amount of work to be done, however. You never really know with these things. There's always a tiny chance that someone like Markiplier could take an interest in Trial by Viking, and show it to a million people over night. It's a crazy world we live in these days!

The Trial by Viking Kickstarter campaign has 11 days left to go. Check it out today and help support another great indie game! And thank you to Dustin Hendricks for taking the time to talk to me about this exciting project.