Guys, I hate to break it to you, but PC gaming isn't what it's cracked up to be anymore.
by CallSignDriver

Nowhere to go but down.

When Ben "Yahtzee" Croshaw first coined the phrase "PC Master Race," I doubt he anticipated how much of a cultural impact it would have on the gaming community as a whole. What began as a satirical remark criticizing elitist PC fanaticism became a rallying cry for PC gaming enthusiasts in general, re-appropriating the term as a compliment rather than an insult. Since then, the PC Master Race subreddit has accumulated nearly 430,000 subscribers, joined together in appreciation of the PC's objective superiority as a gaming platform.

In theory, this is a great thing. Take a look at /r/pcmasterrace's top posts and you'll find threads raising Net Neutrality awareness, exposing bad business practices, and celebrating one another's individual efforts. In practice, however, the PCMR subculture isn't always as sophisticated and classy as its avatar art suggests. I've never heard the phrase "PC Master Race" spoken aloud except by arrogant fanatics and obnoxious children, who mis-appropriate the phrase "console peasant" with the same disgusted malice that I used to hear accompany the slur "filthy casual." In many cases, the members of the PC Master Race have become the very elitist snobs that Yahtzee intended to lampoon. Before I continue, you should understand a few things about me. First, I am not what the PCMR defines as a "peasant." I own a PlayStation 4, but game primarily on my PC, Kerberos (GTX 680, Intel i5-3570K, 8GB DDR3). It's not top-of-the-line, but it's what I have, and I love it. But from the moment I "ascended" (as PCMR puts it), I've had nothing but trouble, from inexplicable errors in games well within my system requirements, to playing customer service phone tag with both Steam and Ubisoft trying to get a refund. My experience with PC gaming has not been 100% satisfying, but I recognize the merits of the platform.

That said, I know from experience that PC gaming can sometimes be unreasonably frustrating when compared to the accessibility of a console--a possibility that the PCMR denies with religious fervor, even in the face of recent launch disasters. With more and more PC games being locked at 30 frames-per-second, modders being intentionally sabotaged, and the quality of graphics being compromised, PC gamers have less and less to brag about with each lackluster release. It's said that people who live in glass houses shouldn't throw stones, and the PCMR is hurling bricks from atop a crumbling castle of hubris.

The Sins of the Father

My list of grievances against the PC as a gaming platform is about a mile long, and to be honest, most of my grievances are directly related to my own technological incompetence. I can't stand having to google some obscure error code right out of the gate, only to find that (for whatever reason) I'm the only person experiencing my specific game-breaking issue. I understand that the QA for the cookie-cutter hardware of the consoles must be significantly simpler than error-proofing a game for PC's hundreds of unique hardware combinations, but that doesn't excuse the issue: my game should work out of the digital box, or my money back, plain and simple.

I understand that error-proofing a game for PC's hundreds of unique hardware combinations is hard, but that doesn't excuse the issue.

It wasn't until recently that Steam began issuing refundsfor unsatisfactory products, and yet the PCMR has been singing Valve's praises for years. Worse than this, however, is Steam's complete absence of satisfactory customer support, a grievance that is generally drowned out by the PCMR's unconditional worship of Gabe Newell. Their faith in Gaben faltered only once, when Steam dared to allow modders to charge money for their hard work. In retaliation, the PCMR subreddit drafted a new banner image--one that didn't feature Gabe Newell as some infallible god king. When the paid mods were removed, the banner stayed. Steam still has lousy support, and PC gamers still gobble it up.

The Peasantification of the PC

Frame rate has become a controversial issue in next-gen gaming recently, which is weird, considering that 60 frames-per-second was already the PC standard well before the launch of the Xbox One and PlayStation 4. But, that's what happens when you make your next generation consoles out of obsolete hardware.

This wouldn't be a problem if the console market didn't drive innovation for the games industry as a whole. Because the XBox One can't render the game's "next gen" visuals at anything higher than 30 fps, the developer doesn't bother to try. To make matters worse, the game's logic is often tied to the frame rate, making it impossible to play the PC port at a higher frame rate without breaking it. As long as developers keep catering to the restrictions of the weaker platform, the PC will never be truly superior.

I might be reading to much into this, but I've always felt like triple-A developers and their publishers bear at least a little bit of resentment towards the PC gaming community.

I say this because it shows. When I have to get online, to launch Steam, to launch uPlay, to try and play my game, only to encounter some asinine error, all because PC gamers are dirty thieves and pirates, I get a little offended. Why should I have to launch uPlay? Why should I have to make a Rockstar Social Club account? If my platform is so damn superior, why am I being forced to jump through all these extra hoops and take steps that console gamers don't have to take, just to get to my game?

When I have to get online, to launch Steam, to launch uPlay, to try and play my game, only to encounter some asinine error, all because PC gamers are dirty thieves and pirates, I get a little offended.

The answer: developers will go to any lengths necessary to prevent pirates and hackers from modifying their game, even if it means alienating their target audience. Case in point: In their efforts to eradicate cheating from GTA Online, Rockstar effectively sabotaged the code of their own game, crippling its performance for modded and unmodded copies of the game, alike. I know they're doing their best to preserve a cheater-free experience for fair players, but at what cost? When is customer satisfaction worth less than loss prevention? 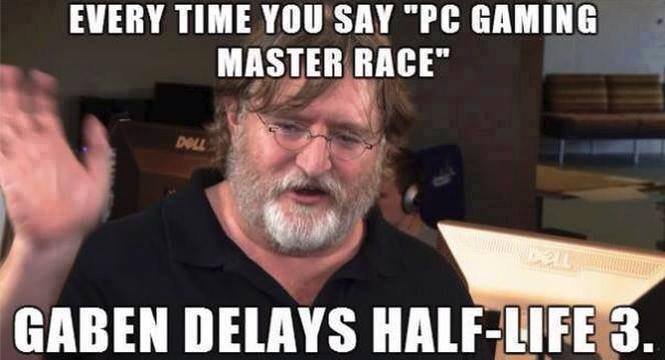 Open your eyes and break your chains

Guys, I hate to break it to you, but PC gaming ain't what it's cracked up to be, and the more we excuse it with empty praise, the worse it gets. We pay 3 to four times as much money for our systems as console owners, but our ports are getting maybe half the attention during development. Developing a triple-A title for PC has become an afterthought, when it should be a priority.

If you're reading this article and I've made you angry, good. That just means you care enough about your platform to defend it. But don't bother defending it from me; I'm not the one tearing it down. Defend it from developers like Ubisoft, who think they can sell us console graphics without us noticing the downgrade. Defend it from companies like Valve, who still refuses to offer the customer support we deserve. Defend it from the members of the PC Master Race itself, who are sometimes too righteous to recognize just how far the brotherhood has fallen.

With the power of contemporary PC hardware, new releases should be surpassing their console counterparts in quality. In most cases, however, they're barely keeping up, if not lagging behind entirely. Show developers that this is NOT ok. If you want 60 frames-per-second, demand it. If you want mod support, demand it. Don't cheapen the PC Master Race by boasting about the features you don't have.

May your framerates be higher, and your temperatures be lower. Don't settle for less.