See why Team Dragon Knights lost and what is next for NA Challenger teams.
by Kevin Cobban

Apex dominated Team Dragon Knights last night and took first in the final round of the League of Legends NA Challenger Series. Apex took the first win of the match, then ended up losing game two. But they regained their confidence and won the last two matches. Their final record was 3-1. All the matches are recorded over at LoL eSports just in case you missed them last night.

But there is still so much to talk about, so stick around for some post-game analysis.

There were many reason why TDK lost, but one of the biggest problems the team had was bad picking and banning phases.

Lets start with TDK's picks. Most of their team compositions revolved around poke champions like Nidalee and Ezreal. Nidalee was picked up every single match -- except game one -- and was even prioritized over other power picks like Nautilus, Poppy, and Kalista. The result was a sloppy poke comp that failed to do enough damage and had weak wave clear. TDK's picks only worked out well if Kez (jungle) managed to shut down Apex's jungler, Shrimp. 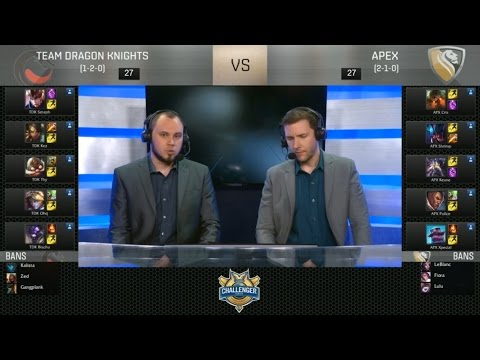 As for bans, TDK had problems prioritizing power picks and target bans. Since they wanted to run poke comps, Nautilus should have been picked or banned every single game. Nautlius provides fantastic peel, engage, and can soak up enormous damage with his shield. Giving Cris (APX's top) Nautilius almost every game was a huge mistake, because he could soak up all of TDK's poke and then dive whenever he wanted.

Another problem TDK faced was poor performances in bot lane

It was shocking to see Ohq, who was one of the strongest ADCs in the NACS, do so poorly against Police (APX's ADC). I predicted in my pre-game coverage that TDK's bot lane would win every lane match-up, but Police and Xpecial beat Qhq and Trance every single game. APX took Police off popular ADCs like Lucian and Ezreal, and gave him Sivir several games. Also, Police was able to play Kalista, which is a strong comfort pick. APX's bot lane could constantly shove the lane and farm, while TDK slowly lost pressure.

Top lane was also a huge issue for TDK

There were several moments during the tournament where Flarez (TDK's top) put his team in bad spots. One of the worst moments was a failed Teleport in game four. A fight broke out bot lane, which quickly turned in TDK's favor, but Flarez cancelled his TP for no reason and gave up the opportunity to get Ohq kills.

Furthermore, Flarez brought out champions that he seemed uncomfortable playing. He played Maokai in game three, but he couldn't do anything against Cris' Nautilus, even with the help of Kez and Alex Ich (mid). Maokai is an outdated tank who loses many lane match-ups and can't keep up with other tanks like Shen, Poppy, or Nautilus.

Similar problems arose when Flarez picked Rammus top. Rammus is a fantastic top, but Flarez didn't seem confident enough to make plays. There were several attempts to engage, but Flarez seemed afraid to commit. The times that he did commit, he was picked apart by CC and magic damage. It also didn't help that Nautilus and Elise could disengage whenever they wanted. 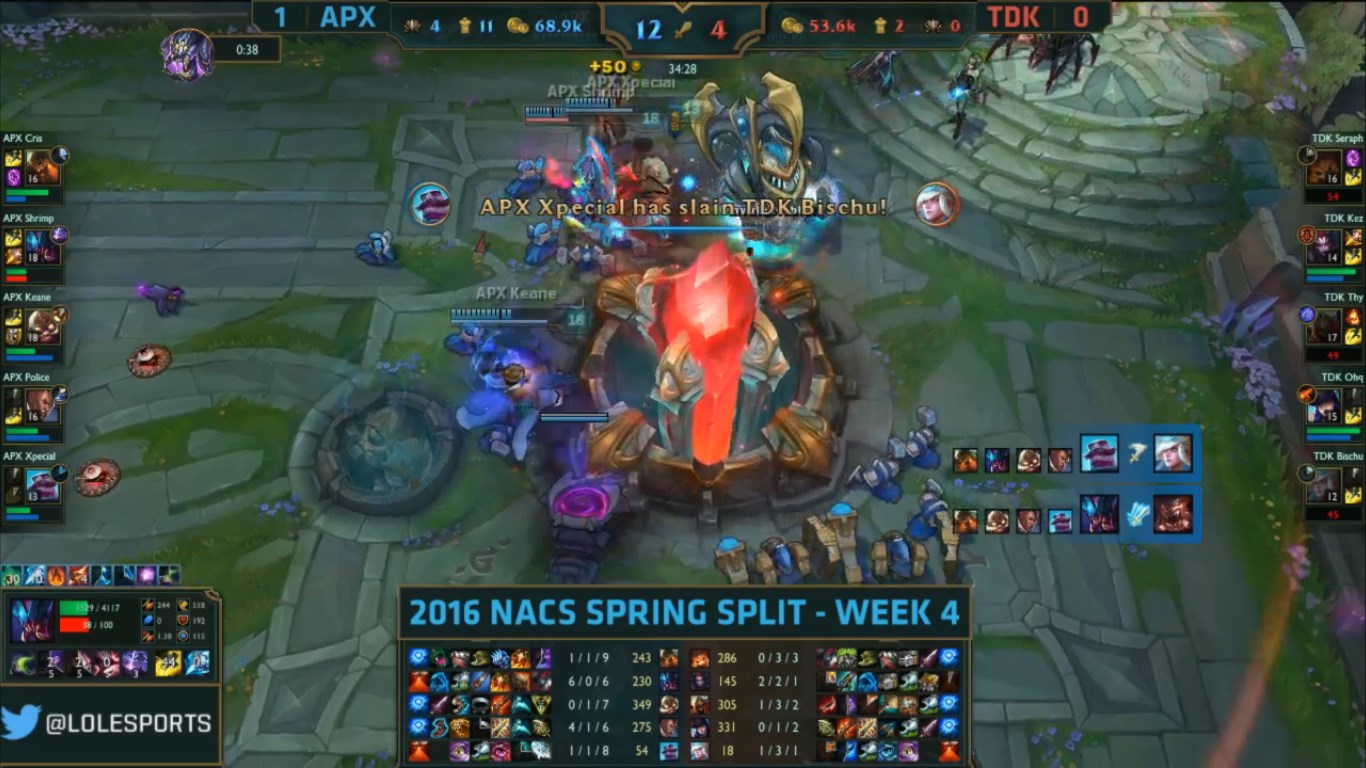 One last point to mention is APX's mid laner, Keane.

Although Keane had a bad game on Zed, his Azir performance in Games 1 and 3 were incredible. He demonstrated great mechanical skill, and picking Azir was a nice counter to Nidalee in Game Three. There was one team fight where Keane landed some crucial ults, which completely shut down TDK's engages.

Moreover, Keane played Graves during Game 4 and showed TDK why that champion was always banned against him. By building Death's Dance, and Phantom Dancer, Keane was almost impossible to kill. The clip below isn't from last night, but it still shows how incredible Keane is on Graves.

Even though the Challenger Series is over, the top five teams still get a chance to enter the NA LCS. There will be a promotion tournament starting March 25th. All those details can be found here.