Interview with the community manager from Craneballs about Planet Nomads.
by KendraG

Planet Nomads is a sci-fi sandbox game of creation and survival on alien planets made by Craneballs. The player takes on the role of a lone scientist who crash lands on an alien planet. The only way to survive on this hostile alien environment is through creating things.

The community manager, Daniel, gave GameSkinny some insight into the beautiful game they are developing at Craneballs and its Kickstarter campaign.

Gameskinny: What inspired you to make Planet Nomads?

Daniel @ Craneballs: It was a few things put together; fascination with space, seeing that procedural generation is possible on a planetary scale and our wish to get on PC. The earliest idea was a sandbox game, with the ability to build anything coming right after and finally our environment artist wanting to follow his life-long inspiration of Tim White, who illustrated most of the sci-fi books he read as a kid.

GS: What would you say makes Planet Nomads different from other sandbox games?

D: It’s three aspects; building, survival and exploration, tied together into a singular experience. In other sandbox games you can usually build something and be happy about it, or you fight for survival, or you explore the world. We wanted to bring meaning to building, so in Planet Nomads it is key to survival. You are completely dependent on technology so advancing it increases your chances of seeing another sunrise and it also expands your action radius, meaning you can finally visit -- for instance -- underground caves, where you wouldn’t survive before. 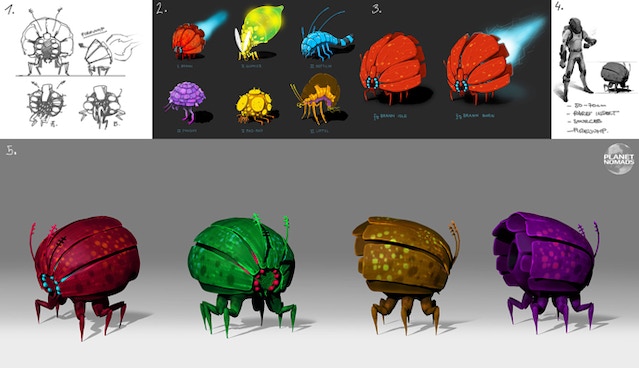 GS: What types of things did you focus on to make the setting look alien?

D: The colors themselves help set the tone of each planet, once you get away from thinking green chlorophyll it opens up a lot of possibilities. With the biomes seen so far, the focus is on vegetation and creatures that will live in there, but we aren’t going to stop there; just didn’t want to alienate our audience from the start.

GS: How much freedom will the players have in the game?

D: The gameplay is all about overcoming a series of (increasingly difficult) problems that players need to solve -- hunger, thirst, shelter from environmental hazard like radiation storms, meteor showers and predators. How the players solve them is completely up to them. They can wall out, build defenses, hide high in the trees. Whether they decide to co-live peacefully with other beings on the planet or become its biggest predator is up to them. We’ll be constantly adding more things to do, explore alien monuments and underground complexes, establish mining operations, build incredible things...ultimately a spaceship.

GS: In your Kickstarter, you talked about the possibility of a multiplayer aspect of the game. How would that work?

D: We’re looking at making our servers open for public with several dozens players and also smaller ones for a group of friends. While we’re all for PvP, and clashes of people’s tanks and assault rovers, there will be a server-wide setting so people who prefer cooperation can join servers without PvP. It will be a combination of building together (faster building and resource gathering) and fighting the environment as a team, going to places together and sharing the joy of new discoveries. We don’t want to get into specific mechanics as we need to test them first, but pretty much what you normally do in life when you fix something (and need a helping hand) or go to a vacation (where you want to share ‘Aaah, this is beautiful, isn’t it?’ with somebody).

GS: What stretch goal are you most excited for in your Kickstarter campaign?

D: We see the value in all of them, but are mostly excited about orbital and space travel, because we’ve done some prototyping and it looked great. We are really looking forward to see what people will build with the tools we’ve given them and since modding can dramatically expand the possibilities, it’s on the list too. Finally it’s the multiplayer stretch goal since that will let people transform Planet Nomads into a whole new thing, even for us.

GS: Do you have any tips for future players of your game?

D: Once Kickstarter is over, stick around for our bi-weekly dev updates, and better yet, join the closed alpha, stick around the forum and help us build Planet Nomads to its full potential.

As of this morning Planet Nomads has completed their Kickstarter goal. There are now backed.

Geeky gamer with a BA in Anthropology who liked playing Shadows of Mordor for the insight into Orc/Uruk hai society.