Supercell's 'Clash Royale' is upon us; if you want to score some victories, you'd do well to stop and pay attention.
by Justin Andress

Supercell has done it again. After months of fanfare, the indomitable gaming company has dropped another hit onto the mobile market. Clash Royale is a deck-based MOBA that works as an offshoot of the company’s mega hit Clash of Clans. Ever since its March 2 release date, the game has seen a swell of popularity that’s unprecedented, even in the super competitive mobile gaming market.

According to Venture Beat, in just three short days, Clash Royale became both the number one App Store game in the US and one of the top-grossing apps in the iOS store. The game has also climbed to the top of the Google Play downloads list.

So, what does all this mean? It means that if you’re going to dive into the world of Clash Royale, you’re going to have some stiff competition. It’s time to armor up and strategize, folks, because domination awaits.

What is Clash Royale?

Okay, if you’re not familiar with Supercell or their previous hit Clash of Clans, do yourself a favor and go download that immediately.

Now, the company’s newest game, Clash Royale, sees players assembling a deck of willing soldiers and waging one-on-one war against online players. Each match begins the same way, with you as the proud owner of a small plot of land and three shiny castles. Across a small moat is your sworn enemy…some guy. That jerk also has three castles and a small plot of land, all of which needs to be destroyed.

So, over the course of a three-minute war, you’re tasked with sending your troops across enemy lines with the goal of doing some damage. Meanwhile you’re enemy is going to be trying the same kind of BS, by sending their troops to attack you.

Getting to Know Your Troops

If you’re going to survive for more than a few seconds, you’ll need to know your army and their basic skills. While you can eventually build an army of incredible variety, throughout the tutorial, you’re going to gather eight basic attacks. These attacks come in the forms of cards which determine the type and ferocity of your offense.

Why eight, though? Because your battle deck — i.e. the cards (read: soldiers) you take into battle — consists of eight slots which you can customize before battle in order to best attack your opponent. Now, keep in mind, that every unit you send into battle costs elixir. You’ll begin with 10 elixir points (that slowly refill over the course of the match) that you can spend on troop deployment, but you’ll need to be smart about sending out the right troops to finish the job. 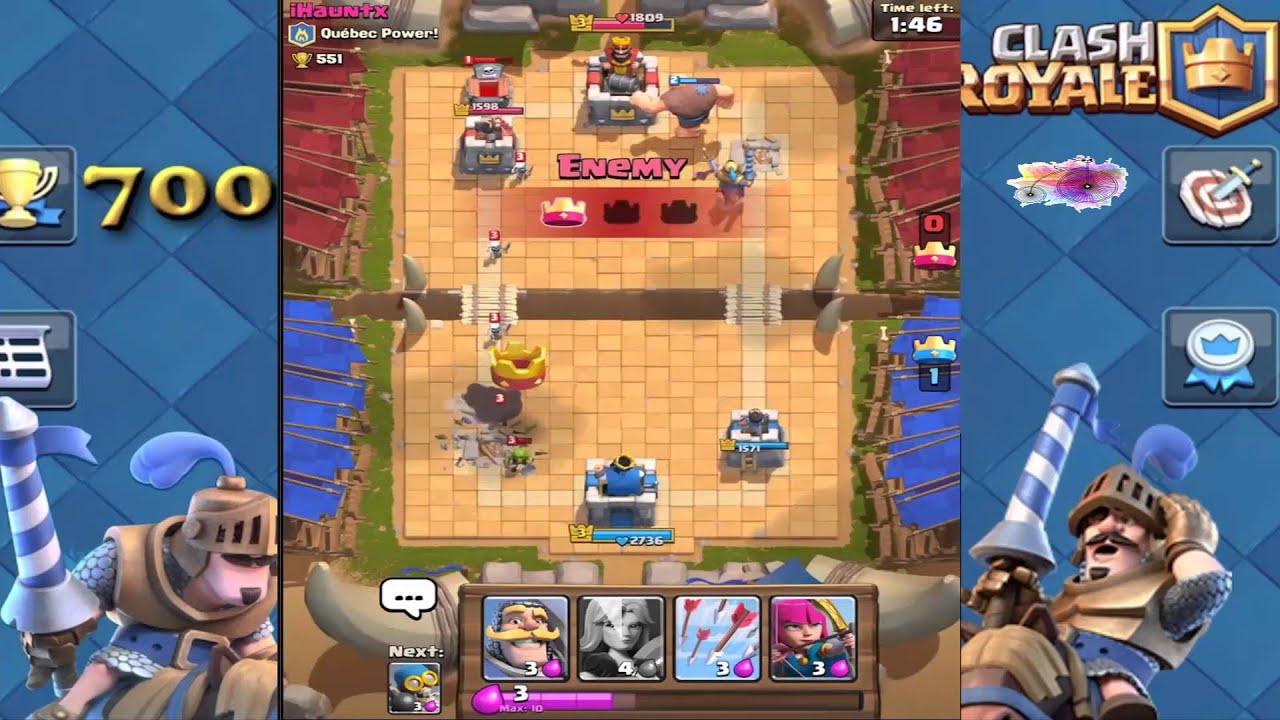 The Knight (3 elixir) is your primary means of ground assault. A melee combatant, the knight is a great opening move to test your enemy’s defenses. It’s best to send these guys in pairs, since they’re slow-moving.

The Archer (3 elixir) is your first ranged unit. Weaker than the knight, they’ll advance until they’re in firing range of either an enemy tower or enemy unit and then they’ll open fire.

The Bomber (3 elixir) is a trade-off. It’s the weakest basic unit, but if it can get close enough to the enemy, it can do some big time damage by lobbing a bomb across the battlefield. Because they’re physically weak, it’s best to pair these guys with a knight so they’ve got some muscle.

The Giant (5 elixir) is your first real tank unit. These guys are great for sending against enemy castles because they take a beating and they deal out serious damage. They’re also very expensive, so it’s best to use them sparingly.

Musketeers (4 elixir) are an advanced ranged unit; basically, they’re slightly stronger archers. They have a little longer life expectancy and they carry a gun.

Witches (5 elixir) are your most powerful ground unit. They’re a mixture of melee and ranged combat that can deal serious damage, especially to enemy troops. Keep these ladies in reserve for taking down swarms of enemy units or putting the finishing touches on a victory.

Arrows (3 elixir) aren’t technically troops. Arrows is an attack in which one of your three towers launches a hair of arrows into a pre-ordained landing spot. They’re perfect for taking out groups of attacking enemies, but not so hot when it comes to tower destruction.

Fireballs (4 elixir) are the ultimate tool of tower destruction. These heat-seeking globs of death deal crazy amounts of damage in a small(ish) area. Don’t waste them on troops, only send them to your enemy’s front door.

Okay, so that’s your starting army, but you’ll need some general advice if you’re going to start tromping all over your online enemies.

Tips to Avoid Getting Creamed 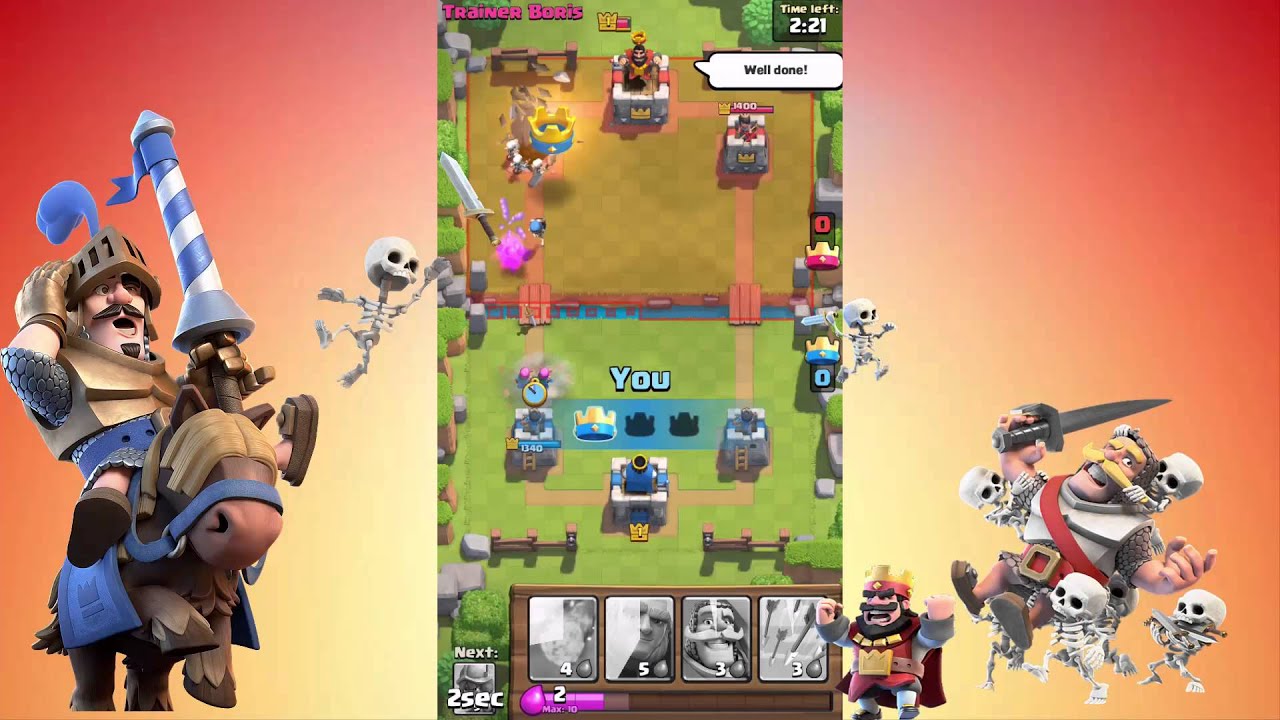 Destroying the middle tower is all you need to win.

Sure, the enemy has three towers, but only the middle one is needed to ensure your victory. Of course, your troops will automatically attack the enemy fortification or troop nearest them, so it’s hard to aim, but technically you don’t need to destroy all three of your enemy’s towers to win.

Leave some elixir in reserve.

You never know what your enemy has up their sleeve, especially when you’re taking on an advanced foe. There’s nothing worse than running out of juice just as your enemy launches a full-on assault.

While you only need to destroy one tower, it’s still important to keep your points of attack shifting in order to keep your enemy off guard. Predictability is the first step on the road to defeat.

Don’t worry about the clock.

If the clock runs down, the match is over. However, you don’t need to have destroyed your enemy’s middle tower to win; you just need to have inflicted the most destruction. So, be smart, attack wisely, defend even better, and don’t worry about the clock.

When you’re about to deploy units onto the battlefield, make sure you’re thinking about each unit’s ability to take and unleash punishment and make sure you pair them with complementary units. Bombers and knights go well together. As do knights and archers.

You don’t want to attack the same way every time. Not only is it boring, it’s also a surefire way to end up with your tower a smoking ruin. So, mix it up, using a mix of ranged and melee attacks.

Mix up your deck.

Don’t go into battle with the same eight soldiers every time. The list of different troops and different attacks is expansive, so make sure you’re experimenting from time to time. Also, don’t stack your deck with expensive, powerful troops. Keep one or two cheap options in play so you’ve always got something to fall back on.

Get the most from your fireballs.

Just like arrows, fireballs have an area-of-effect — or AoE — attack, meaning that they don’t hit one specific point, they rain down destruction in a designated circle. That circle is actually big enough to deal tons of  damage to two towers at once if you’re creative with your aim.

Clash Royale is one of those games wherein you can get enjoyment regardless of how much thinking you’re prepared to do. Of course, the more you’re willing to think creatively, the more success you’ll find. You can expect to take some serious licks in your opening bouts, as you encounter players with more cards in their deck, but as you persevere, you’ll be dealing out serious damage in no time.