Running out of food is the first step towards a riot. Get your kitchen and canteens in order for a more compliant prison.
by Ashley Shankle

Dealing with food supply and demand is something I initially struggled with in Prison Architect, but eventually I got the swing of making sure everyone got fed. A hungry prisoner is a very unhappy prisoner. No one wants to deal with riots.

There are a few ways you can increase the amount of food you have available to your inmates. Below are some options for even the simplest prison:

Making another kitchen and canteen is usually something you don't have to do until you're pretty well expanded unless your initial ones were far too small. If you are simply having problems feeding all your inmates and know you have enough space, you need to first add some new equipment to your kitchen.

Hiring cooks is something you should just gradually do as your prison progresses. The beginning recommended amount is two, but you want to hire up to 5 once your canteen is bustling during mealtimes.

Note: If you've just started a new prison and are getting the "There are no canteens accessible by this cell." notification on your holding cell or cells, you need to secure the parameter with a fence so your guards will let your inmates leave buildings.

The three primary kitchen appliances are the cooker, the fridge, and the sink. You need all three, but adding additional cookers and fridges helps far more than adding sinks.

I would go so far as to say the fridge is perhaps the most important appliance in the kitchen, and is what you should have the most of. The more fridges you have, the more food your cooks will have on hand to work with. I've had more success improving my food supply by adding fridges than cookers and sinks.

Sinks are the least used kitchen equipment, and hence are what you need the least of. Smaller kitchens can get by with one for the most part, though a second sink may be in order if you are really struggling with demand.

Below is an image of one of my kitchens in a smaller prison.

This kitchen and canteen feeds over 100 inmates with 3 cookers, 3 fridges, 4 cooks, and 1 sink, with plenty of food to spare. Maximum security prisoners have different mealtimes than other security levels in this prison.

Cookers, where your cooks make your inmates' meals, should be increased as more inmates use a kitchen; but fridges should be prioritized. It never hurts to have more fridges than cookers. The space they provide makes your cooks that much more efficient. If your cooks aren't using every cooker, it's time to invest in another fridge or two.

Serving tables function as a place for your cooks to put food and for inmates to pick it up. You need at least one serving table per canteen. The busier a canteen is, the more serving tables you should have laid out. The image above in the "Cookers, fridges, and sinks" uses only one serving table due to space restrictions, but would be more efficient with a second one.

Once you unlock Micromanagement via Bureaucracy, you have access to the Logistics tab. From here, you can set food and laundry distribution, as well as see inmate cell quality. We're focusing on food distribution here.

When looking at the food distribution view, you can see which cell blocks are using which canteens to eat, and which kitchens are sending food to which canteens. You can adjust where inmates eat and which canteen food is taken to by clicking on the room you want to change distribution to and dragging the line to its destination.

If you have more than one set of kitchen and canteen, have them fully equipped, and are still having trouble getting all your inmates fed, you should probably make some adjustments to distribution to see if one canteen is being more heavily used than the other. And of course, adding another kitchen and canteen is an option -- though it's pricier in the long run.

You should already have played with your inmates' regimes, but have you considered giving different security levels varying mealtimes? 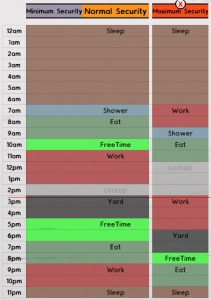 Not only does this lower the chances of more dangerous inmates causing trouble, but it allows your kitchens to handle the workloads more effectively. This has been a huge factor in my food supply and demand, and I guarantee you'll see some positive effects in your prisons as well.

Getting your prisoners their food should be one of your highest priorities unless you like riots. Hopefully, the advice above will help you get your canteens and kitchens in order so your inmates aren't out looking for blood.