Looking for some color combinations to make decks in Magic Duels? This quick guide will get you started on some!
by The Soapbox Lord

So you read my tips for Magic Duels and want to know more about the awesome game of Magic: The Gathering, right? Well, you came to the right place! While the last guide concerned general tips for Duels and Magic, in general, this guide will concern color combination and deck building.

This guide will be a general overview of the main color combinations and what to expect when playing or building them.

Blue: Blue decks are usually about trickery and foiling everything your opponent tries to play. Counterspells are the hallmark of blue, which negate spells your enemy plays. Another hallmark of blue is drawing cards to gain an edge on your opponent. Some other tenants of the color are stealing creatures or other cards on the board from your foe, causing them to mill their deck into their graveyard, or controlling the board.

A blue deck usually has counterspells, some card draw, a few creatures (usually flying), and some form of creature control such as reducing the attack power of their foe’s creatures or tapping them so they cannot attack.

White: White decks are usually centered on life gain and board control. White generally has some of the best removal in the game, second only to black, allowing you to remove almost anything your opposition plays.

A white deck is focused around removal and board control with a splash of life gain to ensure you remain ahead of your adversary. You could also focus around token generation in order to get an army of creatures for relatively little mana.

Black: Black is all about death, whether it be destroying your foe’s board or sacrificing your creatures to gain an advantage, only to reanimate them later. White has powerful removal, but black’s is arguably more powerful, although the removal in black usually affects all creatures in play. 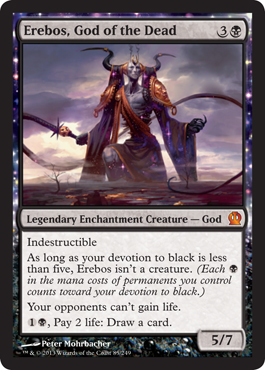 A good black deck has plenty of ways to destroy their opposition’s board while playing strong creatures which can either attack or be sacrificing for an even greater effect.

Red: If black is death, red is about chaotic destruction. Red generally has “burn” spells. Rather than simply destroying or removing creatures, red spells usually deal a set numerical amount of damage. On top of that, red also has plenty of ways to destroy your foe’s mana, enchantments, and anything else they play. It’s basically white’s chaotic younger brother. The creatures also reflect this mentality.

A red deck has plenty of burn and removal spells as well as plenty of creatures to pummel your foes with.

Green: Green is all about massive creatures and generating mana to play these creatures fast. Green also has a little life gain and some removal, usually an effect from a creature card played. Most of green is about the creatures, though, whether it be big ones or token creatures. Green has the biggest and meanest creatures in the game.

A green deck needs mana acceleration in order to access the bigger creatures before their enemy. Mana ramp + lots of creatures, and you can’t go wrong.

Two color decks revolve around using the best of two colors and usually have cards specifically made for their combinations, although you can use general cards in these combinations as well. These combos’ names are derived from their corresponding guilds from the Ravnica block lore.

Selesnya - Green and White: One of my favorite combinations, Selesnya is a blast to play. This combination takes the token generation from both colors and uses the control from white with the mana acceleration of green. The idea is to quickly generate mana in order to flood the board with tokens and buffs for the tokens while controlling the board. A good Selesnya deck has a lot of token generation with mana ramp. You also want to play cards that buff your tokens and big creatures to act as finishers.

Orzhov - White and Black: This combo is based on what are essentially vampires. Orzhov finds you using cards which steal life from your foes while increasing yours. You will also use the removal from both colors to keep your enemy’s creatures at bay to ensure you retain the advantage. Several Orzhov decks also use enchantment cards and token generation. 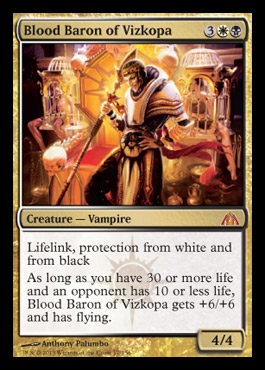 An Orzhov deck has plenty of life-stealing as well life gain. You will also want some creatures which synergize with the life steal as well as removal cards.

Boros - White and Red: Boros is all about aggression. Boros utilizes cards that allow your creatures to attack when played, increase the attack of your creatures, or other such benefits. On top of the aggressive creatures and enchantments, Boros has the removal of both red and white.

Boros decks are extremely aggressive. Boros decks are built to attack as soon and often as possible. You will want low mana cost creatures and buffs for your creatures. You will also want to add removal in order to slow your opponent down and prevent them to play blockers to block your aggressive attempts.

Azorius - Blue and White: These decks can be a major pain to play against. These decks have some serious control and will make your day miserable if you aren’t wise when playing against them. These decks usually revolve around controlling the board in nearly every facet and dominating the skies. These decks also have plenty of card draw in order to maintain a card advantage over their opponents.

You want to add plenty of cards to ensure you maintain control of the board, whether it is by tapping your foe’s creatures, reducing attacker’s damage done, or other sorts of trickery. Add some card draw and some flying creatures on top of the control and you have the basis for an Azorius deck.

Dimir - Black and Blue: Ah Dimir. The embodiment of trickery in Magic, Dimir is the ultimate foil deck. Dimir revolves around foiling anything your enemy plays while playing creatures of your own that are unblockable or other such tricks. Milling your opposition’s decks into their graveyard is another tenet of Dimir. Dimir is my personal favorite and once you play a game with a Dimir deck, you will see why.

A Dimir deck needs counterspells, trickery spells, or milling in order to be effective. You also want to add some creatures that have some special effects which will make them difficult for your foes to remove.

Rakdos - Black and Red: Rakdos is all about chaos and destruction. Rakdos usually employs aggressive creatures who might have some drawbacks but make up for it with ferocity. This combo also employs the removal and burn of black and red. Sacrificing your creatures or something of yours in order to damage your opponent is another key tenant of this combination. Also, some kickass demon and devil creatures!

Rakdos employs a lot of removal and punishment spells. Aggressive creatures are a key focus as well as the removal. There will also be enchantments which devastate their opposition.

Golgari - Green and Black: Death means nothing to the Golgari. The Golgari combination is about reanimation and utilizing your graveyard, as well your opponent’s, to your advantage. The creatures usually have an effect that triggers upon death or allows them to be beneficial after death. On top of the creatures and reanimation, Golgari utilizes removal in order fill graveyards with creatures to reanimate.

Izzet - Red and Blue: Burn baby burn! Izzet is all about the burn spells. On top of burn spells, Izzet revolves around countering spells, card draw, and creatures to pick away at their foe’s health.

Besides the burns, you want to add card draw and counter spells to your Izzet deck. You will want some creatures in order to block or pick away at your enemy’s health. The burn is the foundation though.

Simic - Green and Blue: Simic usually revolves around making your creatures stronger in the form of counters, creating tokens, or swapping creatures in play with ones in your deck. Simic has some mana ramp, and the creatures sometimes have properties of blue such as countering spells and drawing cards.

A Simic deck needs ways to buff your creatures in order to thrive. Most Simic cards have ways to place counters on your creatures as well as increase the amount of mana you can utilize. Once a Simic deck gets rolling, it can be difficult to stop.

Gruul - Green and Red: Some of the biggest creatures in Magic are home to the Gruul guild. Besides gigantic creatures, Gruul also utilizes burn and destruction spells to slow their enemies down before unleashing hell. A well-built Gruul deck is a terrifying thing to behold. Mana ramp is a must for a Gruul deck. In order to play the behemoth creatures, you must utilize mana acceleration in order to play your trump cards. Some burn spells as well as destruction of enemy enchantments and such is a must. Suppress their board, flood your field with mana, and unleash massive creatures. WIN!

If you have any questions or tips to share, feel free to sound off in the comments! Until then, get to dueling. I’ll see you on the battlefield!