How to Get the Asula Set in Black Desert Online

If you're new to BDO, the Asula's accessory set will give you a major gear boost that'll last you a long time. Here's how to find it!
by Kengaskhan

Say what you will about Black Desert Online's enhancement system and the fact that it's basically one incredibly long gear treadmill (no one has hit the gear cap yet), the devs do a good job of giving players an opportunity to catch up with the players who've been working on their gear for over a year.

On several occasions, they've introduced un-enhanceable gear (like the Jarette's set or the Roaring Magical chestpiece) that allows newer players to spend their hard-earned silver on other pieces of equipment and still remain somewhat competitive with veteran players.

In a recent update, another such un-enhanceable accessory set was added to the game: the Asula's Crimson Eye set. 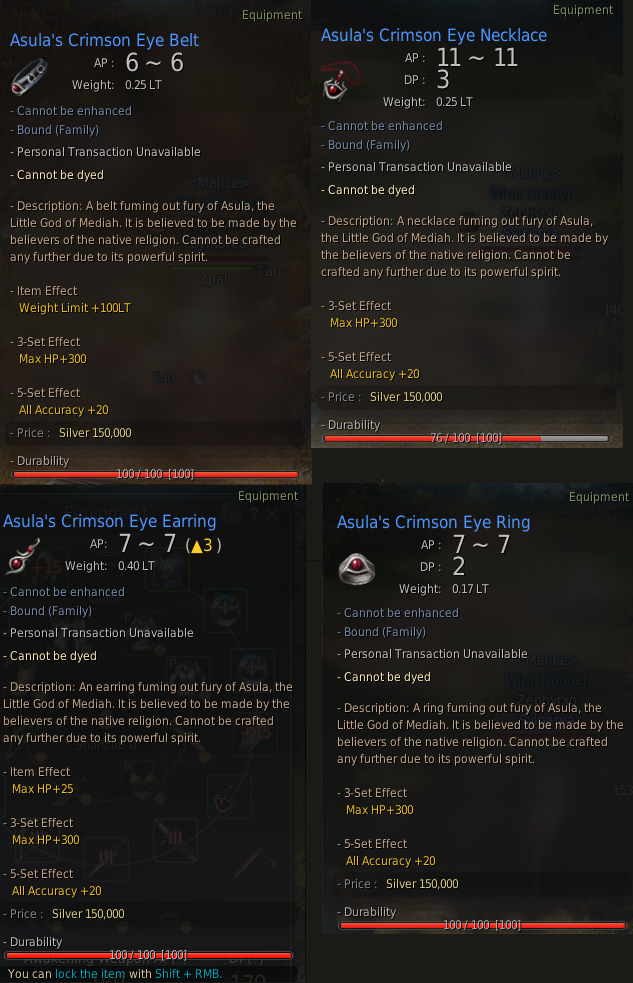 Where to Get the Asula Set in BDO

You acquire each Asula's accessory the same way you get most things in this game -- by ripping them out of a monster's cold, dead hands (or claws). Here's the breakdown of the location of each item:

For the most part, farming the set should be straightforward -- just head to Mediah and start grinding at Helms, Elrics, or the Abandoned Iron Mine.  As it's all RNG, this might take a while. But most people have reported grinding times somewhere between 3-10 hours for the whole set.

It's probably best to start at the Helms Post, as you can farm both the Asula's Ring and Earring from the dwarves, and you'll need two of each. Or, if you've already got some decent accessories, you should start grinding for the piece of jewelry that'll give you the biggest AP boost when you acquire it and work your way down the list.

Also, if you haven't spent much time in Mediah, you should hit up some of the NPCs near the grinding spots for some extermination quests. It might also be worth heading to the tavern near Altinova's western gate to pick up a few more de-facto kill quests from Datu Varudatu.

What Makes The Asula Set So Good?

Of course, the downside to the Asula's Crimson Eye accessories is that they cannot be enhanced. However, accessories are some of the least cost-efficient pieces of gear to enhance -- as your weapons and armor will give you more AP and/or DP for the silver you spend until they're at least PRI or DUO.

And compared to all other base-level accessories, the Asula's Crimson Eye set is unmatched -- for example, the Asula necklace is comparable to a PRI Sicil's Necklace, which is valued at about 150 million silver on the market.

If you're a new player looking to get a leg up on gearing, acquiring your own Asula's Crimson Eye set is one of the best ways (if not the best way) to give your gearscore a massive boost for very little silver. All it takes is a few hours of grinding!

That wraps up this guide! Need more help for your adventures? Check out the rest of our Black Desert Online guides for all the latest tips and tricks!