How to Get the Bronze, Silver, and Gold Compass in PUBG Mobile

Here are all the possible spawn locations for compasses in the latest update for PUBG Mobile.
by Sergey_3847

The latest 0.14.0 update for PUBG Mobile adds a series of events to the game that requires players to locate hidden spots that may contain one of the three new compass items, including bronze, silver, and gold compasses.

You can exchange these compasses for various items, such as weapon skins or character skins, BP scrap, classic coupon scrap, and other items. Different items require different numbers of compasses, so you will have to look for them all over the map.

If you want to know how to easily locate them, then follow our quick guide below with exact locations. 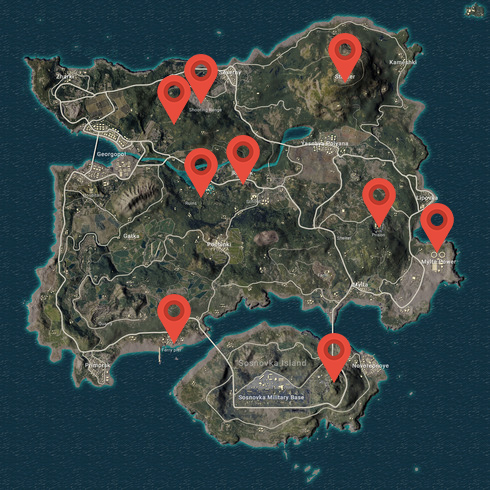 There are nine sure locations where compasses can spawn in PUBG Mobile. If you’re lucky, then you’ll find a golden one in at least one of these locations. But mostly, you’ll find bronze or silver variants, since these spawn randomly.

Here are some surefire locations.

Land on the southern island of Sosnovka and go to the top of the radio tower, which is located on the hill between the Novorepnoe and Military Base.

Between the Sosnovka Island and Ferry Pier, there is a tiny island where these items can also spawn.

Go to the eastern part of the island and locate the large stacks at the back of the Mylta Power building. Compasses should spawn near the tallest chimney.

Move north a bit and look out for a house on top of the hill near the prison building. Look inside that house.

Between Rozhok and the school building, there is an excavation site, where you can look out for more compasses.

Go west of Rozhok to the ruins area, find a church, and search the backyard for more potential spawn points.

Lastly, explore the shooting range area between Severny and Georgopol in the northern part of the map.

There are two possible spots here: one at the plane crash site, and the other one at the entrance into the tunnel on the other side of the hill.

For more PUBG Mobile guides, check out the list below: