If Sea of Thieves' new trading company, The Hunter's Call, has you stumped, follow our guide on all things fishing, cooking, and using that awesome new harpoon gun.
by Mark Delaney

Sea of Thieves has received its biggest content drop yet with the recent Anniversary Update, including the new trading company, The Hunter's Call. If you need help with cooking, hunting, or fishing, look no further!

Below you'll find tips on where to find the fish you want, tricks on how to cook them just right, and advice on how to use that fancy new harpoon gun.

We've also included fish locations as well as where to find The Hunter's Call if you're having trouble locating it. 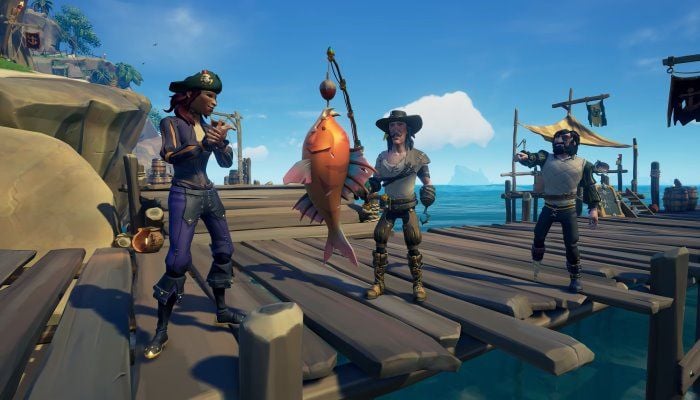 The first thing to know is that you don't need to buy a fishing rod. With the update, your radial menu is automatically updated to include a cosmetically basic fishing rod. It doesn't look fancy, but it does the job all the same as Sea of Thieves' buying options are still limited to cosmetics-only.

Next, you'll want some bait. There are three types, each of them attracts different kinds of fish, and they're all found in barrels around islands and outposts, much like cannonballs, food, and wooden planks.

The three kinds of bait are:

Find some and hold them in your hand (or hook) and watch as they wiggle and squirm. While you don't necessarily need bait to catch fish, you'll see soon that it's important to cast with bait on your line if you're trying to catch particular fish.

Next, find a fishing spot. The cool part about this is most anywhere will do. Different kinds of fish inhabit different regions, with a few types being ubiquitous. If you want to fish off the side of your boat deep out to sea, go for it. If you want to fish from the calm shores of Plunder Valley, you can do that, too. As long as the water is more than a puddle, you're all set!

Now that you've got your rod, your bait, and your preferred spot, it's time to actually catch a fish. The mechanics of doing this are similar to the way many other fishing minigames behave, so you may already be familiar with it.

Cast your line out to sea and wait for a fish to bite. In the right lighting, you'll see their silhouettes or even their fully-colored bodies swimming below, tempted by your squirming bait. Eventually, they'll take a bite and this kicks off the struggle between swashbuckler and fish.

The main thing to keep in mind is to counter the fish's pull by pulling your rod in the opposite direction. You can reel in using RT or your keyboard equivalent, but lay off of that almost entirely except for when the line goes slack. This signals that the fish is taking a breather, and it's then that you're meant to gain ground on it. After a few cycles of this tug-of-war, the fish will lose the battle, and you'll have a nice new meal or item to sell to The Hunter's Call.

With so many kinds of fish in the game and so many commendations tied to reeling in each of them many times over, you're going to want to know where to look to find the elusive fish on your wishlist (fishlist?).

Below is a guide on where to find each kind as well as which bait to use to catch them. The names are often a clue, but why leave it to your best guess when we've found them for you?

Now that your ship reeks of fish, it's time to cook them up. Remember that properly cooked fish net you a bigger payout with The Hunter's Call. But mind the stove; burnt foods reward you less.

The same relationship applies to the health benefits of each food item, too, and not just for fish. The classic bananas can be cooked up as well, just like the other new grocery options such as coconuts, mangoes, and pomegranates.

You can even sacrifice those poor pigs, snakes, and chickens to the gods of hunger and fry them up, too. In fact, you must do so if you want to earn more commendations, as several are linked to frying those harmless (snakes notwithstanding) creatures. For the biggest appetites, you can even cook Kraken, Megalodon, and shark meat.

Like a lot of things in Sea of Thieves, the trick to not overcooking your food is all about the audiovisual cues. After you place a food item on a frying pan, either which is found on all ships' lower decks or the campfires and pans found on islands and outposts, watch and listen for the moment when it's cooked to perfection.

While the fruits will burn fast and seem not to benefit from any cooking anyway, the color of the meats will change slowly and the crackling of the pan will change when the meal is just about ready.

Keep it on too long and it'll char, leaving you with a poorer quality item for sale, or a worse healing item. Get it just right and you'll maximize your profit or even gain all-new health boosts as displayed on the redesigned HP meter in the game's UI.

You want the foods to lose their raw pinkish hues and darken to an orangish-brown, just like in real life. Eating raw meats will get your pirate sicker than a flagon of grog too, so for your own health, do not consume undercooked foods, pirate!

Where is The Hunter's Call? 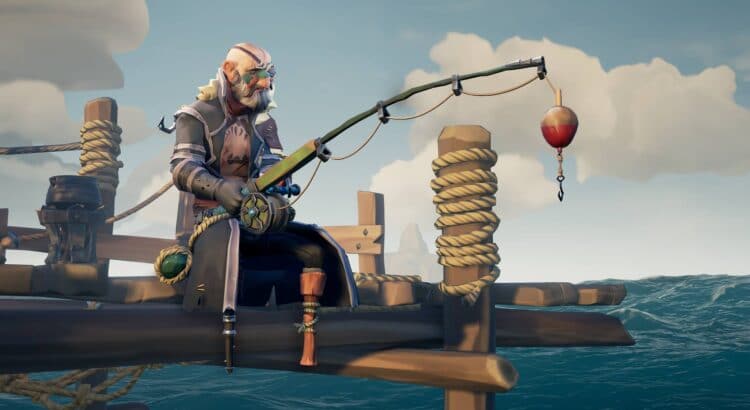 For all of their efforts to do a better job explaining things lately, Rare still doesn't so easily point players toward this new trading company (though you may catch the info on loading screens if you're paying attention).

Unlike the other trading companies, The Hunter's Call is not located on the outposts. Instead, you'll find them at the seaposts, the miniature outposts scattered across the sea and your ship map.

Any of the tiny storefronts with "Post" in the name is a seapost and thus plays host to someone from Merrick's family. That's right, Merrick, the double peg-legged Hungering One survivor is back as the leader of The Hunter's Call.

You can find him or one of his family members all over the world of Sea of Thieves by visiting any seapost.

The Hunter's Call offers 10 promotions, 24 new titles, 10 new items, and a whopping 319 new commendations to unlock, though it should be noted that many of these commendations are increasingly higher tiered challenges of the same type, like selling one specific kind of fish, once, 10 times, and so on.

Like most of the game, the harpoon gun wasn't introduced for one explicit reason. "Tools, not rules" is once again the guiding principle.

Each ship is outfitted with multiple harpoon guns stationed near the front of the ship and with these, you can do a number of things, such as shoot at roaming Megalodons, snatch loot from another ship, make a previously impossible hairpin turn around an obstacle, or even quickly pull a crewmate aboard from an island.

The video clips that will soon emerge from this new tool are sure to be wild and totally different from anything longtime fans have seen, and Rare has encouraged players to get creative with it. One player even wondered if a galleon could harpoon itself to a sloop on either side and bring Star Wars' podracing into the ocean. Time will tell! How do you plan on using the harpoon gun?

This concludes our guide to The Hunter's Call for Sea of Thieves. Stay tuned for later in the week when we teach you how to win in The Arena or solve the game's latest story campaign, Tall Tales: Shores of Gold.