Check this detailed guide out for everything you need to complete the King's Fall raid in Destiny: The Taken King.
by Synzer

Destiny's latest raid, King's Fall, is longer than either of the previous raids and takes a lot of teamwork and coordination. You can't solo this one! They set the raid up in a way that is difficult if you don't know the mechanics, but if you figure them out and have good communication, anyone can beat it.

I'm here to explain the raid so you won't have to scratch your head, wondering what to do next. Check out my Taken King Beginner Tips and Tricks if you need help getting through the game and getting ready to raid.

This guide will go over everything in the King's Fall raid including:

When you enter the raid, you'll be near the Court of Oryx, but now there are two relics. When you pick one up, enemies spawn and a wall appears in the middle.

This causes two more relics to appear, one on each side, through the hallways.

The next part is a Pendulum jump section, but it doesn't require anything tricky. Just jump from one swinging platform to the next until you make it all the way across.

After making it to the open area with several ships, you are at the first real jump puzzle section.

This is a section that is easier to see than read. The video shows the way I went to complete it.

Note: At the 3-minute mark I jump high to the next ship, then jump to the next one and only make it because of a sword swing. This was the hard way to do it.

Instead, duck underneath the first ship, then easily jump to the next one when it gets close.

After everyone gets across, go up the stairs and you will see two plates to step on, one on each side.

There is a chest at this section that is fairly easy to get.

Once you pass the ship jump section you'll reach a room with a plate in the middle, totems through hallways on each side, and orbs to pick up. This is the first raid loot encounter.

To complete this encounter, you must charge the door until it opens. You do this by standing on the middle plate with the Deathsinger's Power buff.

Here's the best way to beat the Totem Charge encounter:

You keep running back and forth with the buff until the door full charges and opens. A chest spawns in the middle with loot once it is over.

When the charged door opens the next room is the Warpriest fight. When you walk in you'll see 3 columns with glyphs and a plate in front of each one. All plates must be pushed down at the same time to start the fight.

When the boss comes out, he is immune to damage. You can only damage him when you are in the Aura of the Initiate. More on that in a bit.

Before the fight starts assign a person to each plate because you'll have to call out which to step on during the fight and this makes it easier. You'll also want to assign one person to look at the back of the glyphs.

When this is over, the column gets broken and you go back to killing enemies. You repeat this until the knights spawn again, kill them to start the glyph sequence again. Rinse and repeat.

When the Warpriest boss is at 50% health:

Taken will start spawning instead of Hive. You do the same thing, but Taken knights will spawn near the plates this time. Kill them to start the sequence again.

Video of taking down the Warpriest.

There is no chest after this boss, he drops the loot in engrams.

This maze is hard to see because it is dark. The above video shows how I got through it. The_New_Monarch on reddit made a map to make things easier. This map also shows how to get the hidden chest. You must step on the plates in the correct order. The order is random, but it always starts on 3. 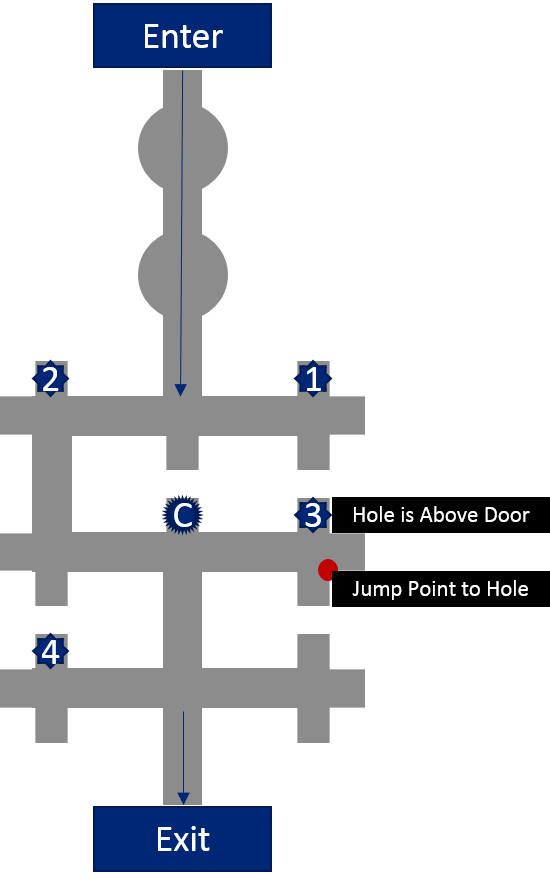 4. How to beat Golgoroth and the pushing jump section

Golgoroth stops a lot of people because you need heavy coordination and a lot of damage. Once you get the hang of it, it isn't so bad. There are a few different ways to do this, but I'll go over what our fireteam found the easiest.

When you enter the room there is an orb hanging from the ceiling in the middle. When you destroy this, you start the fight. Before the fight, assign two people to take Golgoroth's Gaze, they will be switching the gaze back and forth (we'll go over how to do that in a second).

Once the fight starts, head to the back of the room to kill all the enemies that spawn. Enemies continue to spawn out of the doors in the back and sides as well.

6 orbs appear on the ceilings, similar to the orb you destroyed to start the fight.

Just repeat this until the boss dies. Whenever the gaze is lost, or someone dies, the big rune gets one charge. If the rune gets fully charged to 5 charges, everyone automatically dies.

After Golgoroth, you reach the final jump section, which involves pistons coming out of the walls that will push you off.

There is a final chest in this section. theoryyylol on Reddit has a description of how to reach it:

Keep going past the pistons and jumping up until you reach the ball of light. This is the end of the jumping section and leads to the next room with another small jump section.

Just jump on the rocks and platforms until you reach the top. When everyone gets there, head into the next and final room.

6. How to kill the Daughters of Oryx

The last two fights are in the same area and requires a lot of communication and coordination.

This fight requires jumping on the platforms in the right order. If you look in the air, you'll see a light with a distance marker high above one of the platforms. You must reach this light to gain the ability to steal one the aura from one of the daughters.

Our fireteam numbered the platforms to make the fight easier. As you enter the room, the front left platform was 1, front right was 2, back left was 3, and back right was 4.

After that, the light randomly appears over another platform and another person is randomly chosen for Torn Between Dimensions. Repeat the same process until you kill both daughters.

The people standing on the platforms have to kill the enemies that show up so they don't die. If you die on a platform or move off, the floating platforms disappear, the person can't get the buff, and everyone dies.

6. How to beat Oryx, The Taken King

When the daughters die, a chest spawns with loot and if you go forward towards the light, Oryx spawns.

When you stand on a platform an ogre spawns near that platform. The two people not doing the platforms on Torn between Dimensions should stand on the two platforms the daughters were at during the last boss fight.

The light explosion from standing in the orbs is what damages Oryx, so it is very important to run in at the same time.

After two explosions, Oryx will go to the middle and spawn a huge dome.

He will randomly put people in this dome, one at a time. When inside, look for the Shade of Oryx and keep attacking the Shade until it dies. This is similar to the last story mission.

If you kill it fast enough everyone gets taken out and you repeat the platform part. You won't have to do the running section once he hits 50% health. Repeat this until his health bar looks gone.

At 0% health Oryx will go to the middle for a last stand.

Everyone must shoot his glowing chest to stagger and kill Oryx. This is just like the previous stagger part, so you must do this or you die.

If you stagger him, he dies, you win, and you get loot.

I hope I explained the fights well enough for you to complete the raid. If you have any questions or need clarification of any steps, just let me know.