New to GW2? Here's a guide to help you figure out your finances.
by Auverin Morrow

Now that Guild Wars 2 has become free-to-play, a lot of new players will be coming to Tyria. If you’re one of them, there’s a lot you’ll need to learn to get the most out of your time there – like how the economy works.

Tyrian currency comes in many forms and from many sources. This guide will outline each type of currency, what it’s used for, and where to find it. I’ll also touch on the limitations of the F2P version of the game that might affect your ability to acquire and use certain currencies.

If you’re curious about one type of currency specifically, you can use the table of contents below to jump to the corresponding section of this article.

All these account-based currencies can be found in your Wallet, which you can access by clicking on the currencies in the lower-right corner of the inventory screen.

This is the most common form of currency, and the most widely accepted by NPCs. It’s also the basis for player trade. As is the standard with MMO gold, coins are most often found in loot or given as rewards for earning achievements and completing events. Coins are separated into copper, silver, and gold. The exchange rate is as follows:

Purchasing gems is really the only way to acquire them, but you can get some free gems by reaching certain achievement point tiers.

There is an exchange rate for coin-to-gem trades (or vice versa), but the exact rate is in constant fluctuation, as it’s determined by in-game changes to supply and demand.

Karma is used to purchase special items from karma merchants and a few select NPCs. These merchants can be found all over the world, and have a [Karma] suffix after their names to indicate their status. You can use karma to buy high-quality crafting recipes from any master craftsman in Tyria as well.

Renown heart NPCs will accept karma once you’ve helped them reach their goals, so you can buy unique items related to the task(s) you helped that NPC complete.

There is also a rare item called the Karmic Converter that allows you to exchange karma for one of three special items per day. To get the Karmic Converter, you’ll need to complete the Exotic Hunter Achievement: unlock 34 exotic weapon skins from Champion bags in your wardrobe.

That's Miyani. Look for the big shiny thing, and you'll find her.

Spirit shards are used by Miyani to maintain the Mystic Forge. You can visit her or any of the Mystic Forge Attendants at the Trader’s Forum in Lion’s Arch to trade shards for mystical items.

If you’re level 80, you can acquire spirit shards in random drops, or by using the Tome of Knowledge. Players below level 80 can get one spirit shard by using Dessa’s Experiment journal (a rare Fractal boss drop, but you can also purchase it from BUY-4373 in Mistlock). Or, you can earn the Daily Completionist meta-achievement to get a Small Bag of Spirit Shards.

Laurels are a non-tradeable currency that is used to purchase various items, services, and ascended gear from laurel merchants. You’ll find these vendors in every major city.

Laurels are given as login rewards and achievement awards, but players using an F2P account will only be able to obtain them through achievement awards. See the F2P Limitations section of this article for more information.

A few of the items available at Laurel Merchants.

The Badge of Honor is a special WvW (World vs. World) currency. You can use it to buy special armor, weapons, blueprints, siege equipment, and more from Master Merchants and other special vendors (including WvW laurel merchants). These merchants are located in Red, Blue, and Green Borderlands, and there is one in the Eternal Battlegrounds as well. A handful of merchants in the Edge of the Mists will also accept Badges of Honors.

These dungeon-specific currencies are collected by exploring certain dungeons throughout Tyria. They can be traded to the Dungeon Merchant at the Vigil Centerhouse in Fort Marriner in exchange for special dungeon weapons and armors. This one merchant accepts all forms of dungeon currency – just make sure you select the right type of currency from the list of dialogue options when you first speak to him.

I won’t go over the specifics of each dungeon currency, but here’s a list of each kind and where it can be found:

These relics are acquired only in the Fractals of the Mists – a special type of dungeon with branching mini-dungeons that all have their own stories and environments. Enemies in these dungeons will drop the relics.

To purchase anything with your Fractal Relics, you’ll have to visit BUY-4373 in Mistlock Observatory. You can use them to buy slot bags, ascended rings, and other miscellaneous items.

These are also found in the Fractals of the Mists, in the daily chest at the end of each bonus Fractal. You can use Pristine Fractal Relics to buy special ascended rings from BUY-4373.

You can get to Fractals of the Mists from Fort Marriner.

Geodes are found in Dry Top. You can acquire them from creature drops, or by completing events and advancing the Living Story for that area.

They’re accepted by Geode merchants in Dry Top, and can be traded for valuable items like ambrite weapons, Nomad’s gear, recipes, etc.

You can trade these Crests to vendors at Camp Resolve and secured outposts to get carapace armor, recipes for sinister gear, and other items. 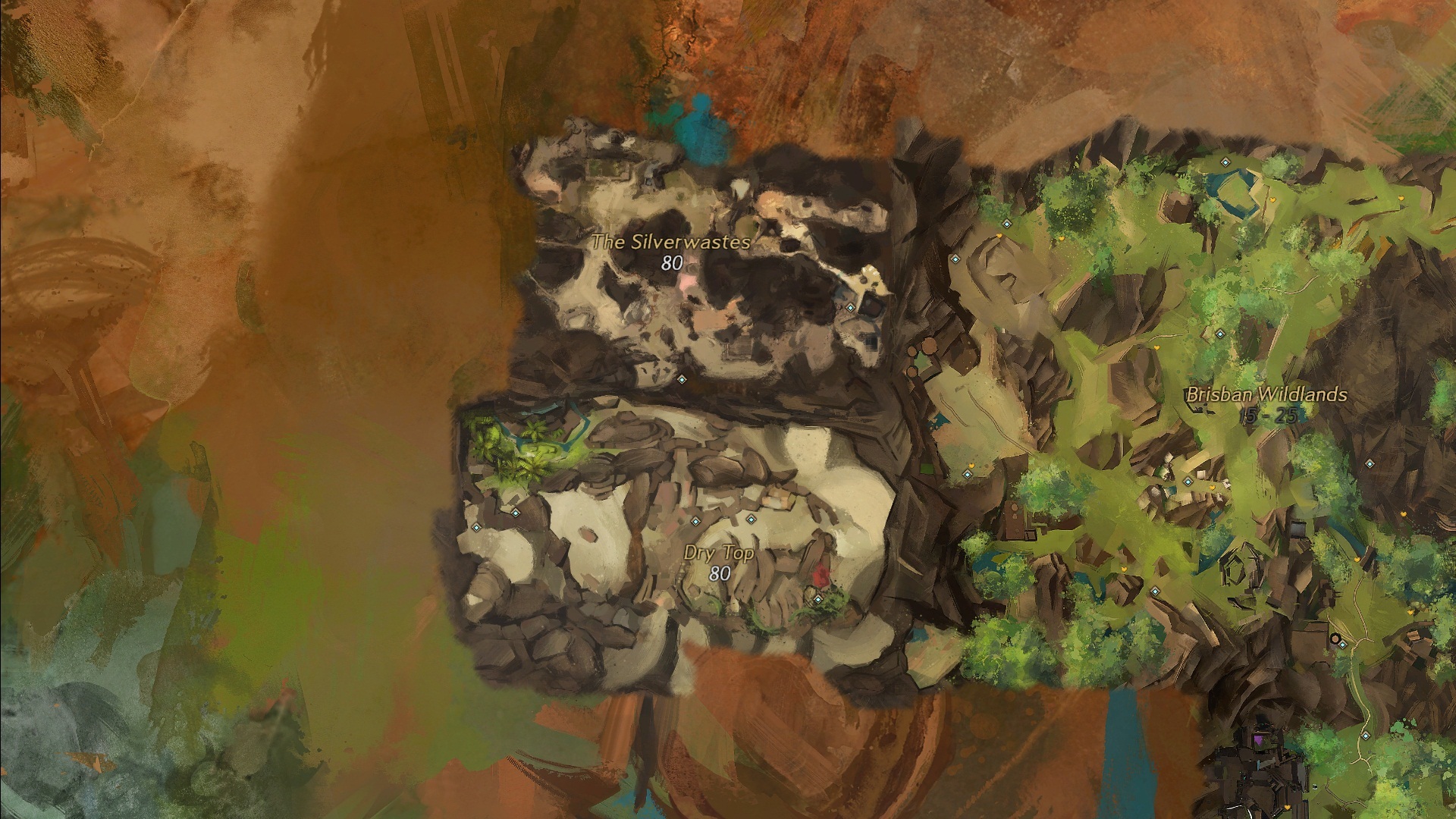 Conveniently enough, Dry Top and the Silverwastes are neighboring areas.

Tokens are physical items that take up inventory space (that is, they aren’t stored in the Wallet like other currencies). But like all other types of currency, they’re used to purchase special items from select vendors. Tokens are common in Living World installments. Typically, there will be at least one type of token that’s only available for a limited time.

Certain items that are used as crafting elements also double as tokens.

Karka Shell: use these at the following vendors to get special potions or Ancient Karka Shells.

Glob of Ectoplasm: trade this to the following merchants to get ectoplasm that can be destabilized to give you random amounts of valuable junk.

These tickets can be traded to a Black Lion Weapons specialist in Lion’s Arch (or you can just double-click it in your inventory) to get special weapon skins.

Black Lion Claim Tickets can be obtained from Black Lion Chests, reward chests from the Tournament of Legends PvP mode, or by earning Black Lion-related achievements. 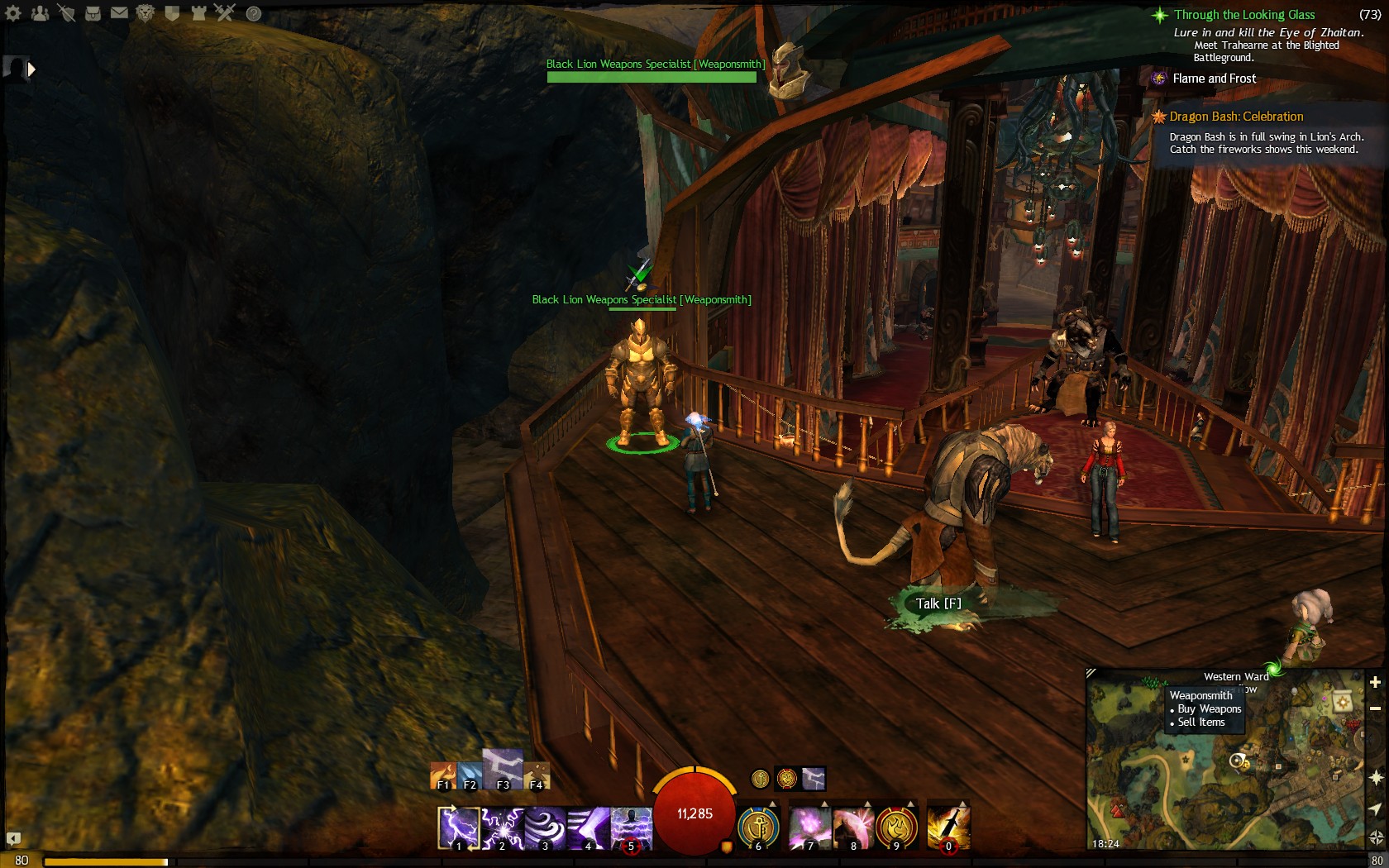 Claim Ticket Scraps come in these packs and chests, available for purchase from the Gem Store:

As the name implies, these tokens are earned by participating in WvW tournaments. If you visit the Battle Historians located near the entry waypoints on the WvW map, you can exchange these claim tickets for weapon skins, tournament weapons, and ascended accessories.

Some types of currency are exclusive to guilds or players representing guilds. These currencies are most often used for guild upgrades or boons, though some can be traded for items or coin. Commendations are earned by participating in guild missions while representing that guild. Upon completion of a guild mission, double-click the small chest that appears in the lower right portion of your screen. You should find some Commendations in there.

Guilds use Influence to purchase boons and other guild-wide upgrades. You can earn Influence for your guild by participating in solo content, events, or PvP while representing that guild.

Certain consumables will also reward you with Influence – particularly Letters of Thanks or Letters of Commendation, which can be bought from Guild Promoters and Commendation Traders, or earned by advancing the personal story. Black Lion Chests sometimes contain Influence as well.

You can even buy Influence directly from Guild Promoters in exchange for going, at a rate of 1 copper for 5 Influence.

Merit is used to purchase high-tier upgrades and boons that can’t be obtained with Influence alone.

There are several limitations being placed on F2P accounts to minimize the number of spammers and bots in the game. Most of these limitations don’t affect currency in any way, but there are a few that you should be aware of.

If you’re looking to rack up Laurels by logging in consistently, it’s not going to happen. Free-to-play accounts can’t earn any kind of reward for logging in. You’ll have to grind another way.

Gems cannot be bought with coins.

If you have an F2P account, you can trade gems for coins, but you cannot trade coins for gems. You’ll have to buy them with real money.

Some items will not be available to you.

There are certain items in the Gem Store and at the Trading Post can’t be used by free accounts, so these won’t appear in merchant inventories. 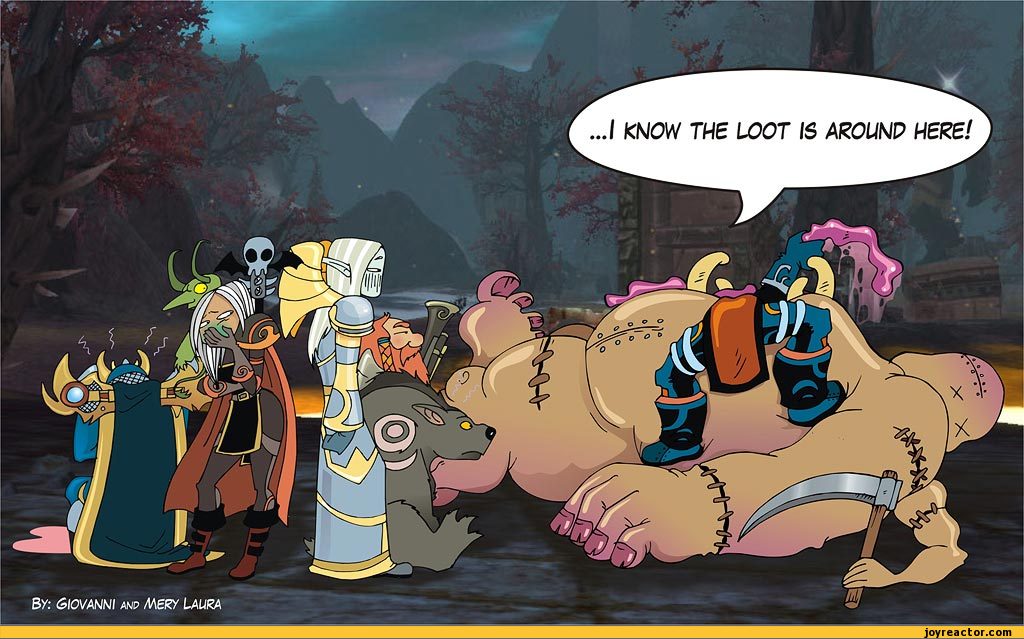 That covers just about everything you’ll need to know about Guild Wars 2 currency. If you want some tips on how to get more gold, you can check out our gold-making guide.

If you have any questions or you’d like to offer suggestions for future GW2 guides, leave a comment below!