Can't figure out which technologies to research and which god to worship in Total War: Warhammer Norsca DLC? This guide will help you make the right choice!
by Serhii Patskan

The Norsca DLC for Total War: Warhammer introduced 33 new technologies and 4 Chaos Gods that can help you move forward with your campaign. However, the Chaos Gods mechanic is a bit more complicated and requires a closer look at your situation before making a pledge.

If you want to know which technologies are the most helpful in the Norsca DLC, and which god to choose depending on your stance in the campaign, keep on reading this Warhammer guide for all the information you'll need. 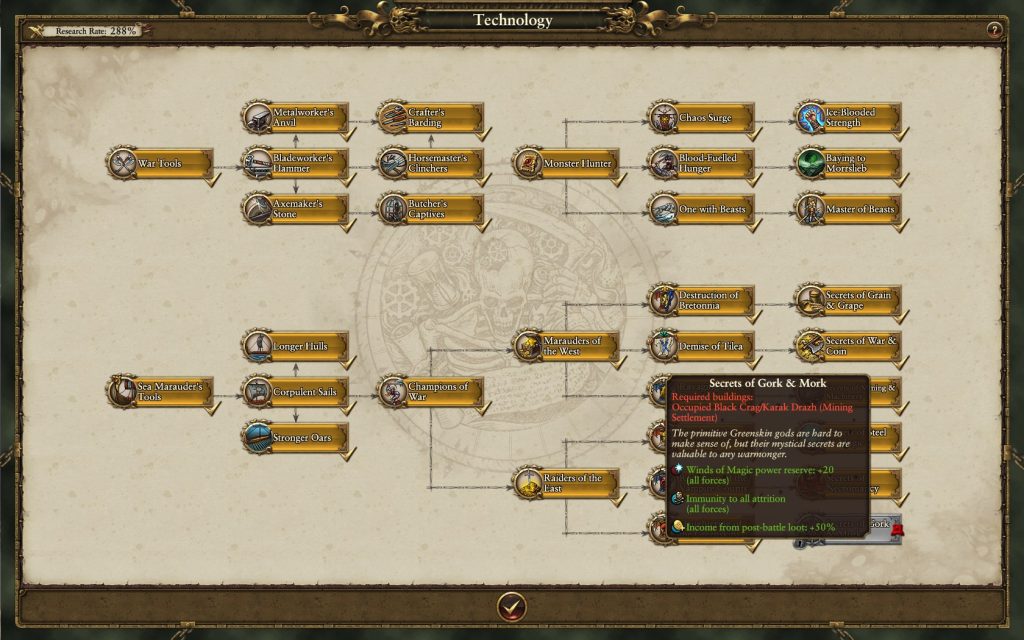 There are three major wings of technologies in the Norsca DLC: War Tools, Monster Hunter, and Sea Marauder’s Tools.

The majority of Norsca armies consist of tribal robbers, so the most beneficial technology you can research in the Norsca DLC is Razing of the Empire. It will make all tribal robbers extremely cheap to hire, and thus help you significantly increase the number of units in your army early in the game.

However, you can’t research Razing of the Empire immediately. First you must start with Sea Marauder’s Tools, which will open the next two technologies: Corpulent Sails and Champions of War. All of them are especially impactful in the first half of the campaign.

You can begin the research of Sea Marauder’s Tools during the first step of your campaign. The next is Corpulent Sails, which will let you be more mobile on the map, and Champions of War, which will let you unite and recruit enemy armies. You can research both of these and Razing of the Empire technologies on steps 4 or 5.

The other three most important technologies in the Norsca DLC are: Monster Hunter, One With Beasts, and Master of Beasts.

You can start researching them after you’ve researched the Razing of the Empire tech -- usually in the second half of the campaign. They will open access to special battles, the Monster Hunts, that will reward you with unique artifacts.

This wing is not as important as the previous ones, but the technologies represented here can make your life in the campaign easier. It is not essential to research them, but only if you have enough time and resources. Basically, they make crafting of weapons and maintenance of your army cheaper.

The Norsca DLC offers four gods for worshipping that may enhance your gameplay, if you choose to pledge your allegiance to one of them. But you also need to consider that by fully devoting yourself to one god, you will summon the wrath of the other three gods -- meaning that you will not be able to change your direction once you've chosen.

Before deciding which god to worship, or even if you want to do it in the first place, let’s take a look at what each of them offers.

Slaanesh, the Lord of Pleasure (The Serpent)

Choose this god if you want to maintain and hire new units in your army cheaper by 10%. If you manage to upgrade your allegiance to level 3, then you will also have a powerful chaos sorcerer fighting on your side.

Nurgle, the Lord of Decay (The Crow)

Choose Nurgle if you want your army to be healed instantly, and your lords may even return to life immediately after death. If you max out your worship to Nurgle, then he will cast a massive plague all over the world, but your own army will be unaffected.

Khorne, the Blood God (The Hound)

Khorne will make your army stronger in melee combat, and will increase the experience received from the battles. At level 3 you will be able to recruit an Ice-Forge Legion -- the only available artillery legion in the Norsca DLC.

Tzeentch, the Changer of Ways (The Eagle)

This eagle-god will increase your research rate by 20%, and will give +20 to your starting amount of Winds of Magic. At the highest level you will gain access to a unique lord -- Azrik the Maze Keeper.

So, which god to choose?

Obviously, the strongest god among them all is Nurgle, the Lord of Decay. Fearlessly pledge your allegiance to him and watch your enemies all over the map die in terrible conditions. Even if they survive, their numbers will be greatly reduced, and those left will have absolutely no power to withstand your own army.

The rest of the gods are not particularly interesting unless you want to try something different for your next replay.

That wraps up this guide! Hopefully it's helped you decide which technologies to focus on and which chaos gods to follow. Need more help with the game? Check out other Total War: Warhammer guides for everything you need to know: