Over the last 18 years of gaming, I have devised and perfected many tricks and maneuvers to help me win. Some require a lot of attention and others common sense.
by Benjamin Browning

We all hate coming in last place on the leaderboards, causing our team to lose the game. Even just for one game, it is disheartening, or at least it is for me. I hate losing, and I must be in the top two in every lobby.

Halo always had greater amounts of attention put towards their maps for the players to manipulate and dominate the warzone. Proving that there is great success in genius map-making, time and time again

The radar is a little bit trickier to get used to. In my opinion, the range on the motion sensor that has kept us safe since 2001 has significantly less reach. It may be due to faster sprints and the thrusters helping us travel more distance more quickly, but when an enemy shows up on radar, he or she is right in your face. The times of camping around corners and waiting for the poor soul to round the corner to meet their fate is practically over.

Therefore, keep a wary eye on the radar, but do not ultimately rely on it as much as one could with the rest of the Halos.

The layout of the map and your teammates' location may determine the position of your enemies. Typically, if your team is pushing forward towards a particular location or direction, it is fair to surmise that the opponents are there. Orient yourself with your surroundings, and after getting a feel for the map(s), predict where the enemies are and will be.

Learn the spawn areas and how they operate with each death situation and positioning of your teammates, so you can anticipate where to expect some action.

When I started playing Halo back when it first came out in 2001, the power weapons appeared every two minutes after being picked up. And the match’s timer was my tool to keep track and get ready for the next wave.

However, this is not the case anymore in Halo 5’s newest addition of announcing when they will come back. Despite that being announced to everyone, friend and foe, it is still important to keep track of the sniper, shotgun, rocket, plasma canister, etc. Just keep your distance and be patient.

You could even use the weapon’s spawning as bait to a trap. Stay close by, and once it comes back, toss a grenade or open fire onto the opponents that rush for the gun. 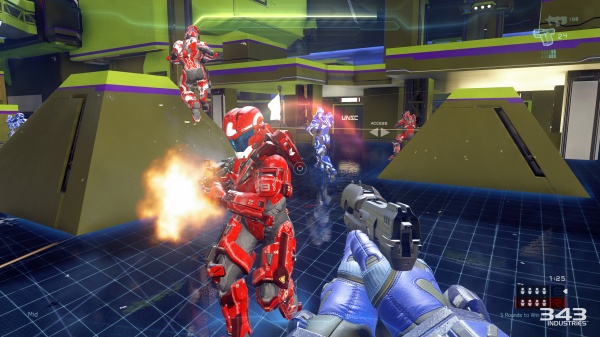 Being one step ahead of the enemy has been the key to survival for thousands of years, and it works just the same here. Psychological warfare is a big one, and one of my favorites. One example is if you and an enemy are closing in on each other, opening fire, and there is an object that is in fair size that separates you two.

Make it a point that you are moving to one end, but in turn you quickly switch directions once out of sight, and then you will be behind them, catching them off guard.

Another example: if you are being chased with a considerable amount of distance between you and your assailant, and come up to an intersection with two or more pathways, run down one slightly and fire a few rounds to show up on radar. But here is the trick: quickly go back and crouch around the corner of another corridor, and then strike once they go down the wrong way.

Additionally, one situation that has always gotten me out of a jam is the bouncing grenade of the wall. If you are being shot while rounding a corner, and the enemy is close, lob a grenade off the wall slightly, so that when it lands and goes off, there will be lowered energy shield(s) that needs one magnum, DMR, or BR shot to the head for the win.

Sometimes, not every skirmish can be won. If the odds are against your favor, and you do not have any advantage to turn the tides, run—even if will mean not saving your teammates’ lives.

Run away to safety to regroup with your team. Rather than being gunned down by the enemy team with two other teammates, do not be added to the scoreboard with them. Every death counts. There is no need to try being a hero with nothing to show for it.

Another tip to do while running away, or more importantly for cover, once you find a safe spot, crouch. Your shields will recharge more quickly than even walking around, since sprinting full speed cancels the reload speed of them entirely.

Aim for the head

This one may sound simple and old fashioned, but it gets the job done. Shots to the head are the most efficient way to bring down the bad guys. A sniper rifle would be mostly preferred, but since the magnum is back to being an awesome sidearm to where you can survive a battle against a BR, DMR, Light rifle, and a Carbine with its holographic iron sights, one can easily bring down any contender.