How To Play 2016 College Football Season In NCAA Football 14

Lane Kiffin has gone to FAU, Alabama is headed for another national title, and there's no college football game out right now. That is, unless you still have NCAA Football 14...
by JakeElman

This week is when the fun begins. Starting Saturday with the AFR Celebration Bowl between NC Central and Grambling State, we've entered bowl season in college football.

From Boca Raton to the Bronx, bowls will be played nearly every day from December 17 until January 2, with the only days without bowls being the Sundays (Christmas would have been without a bowl regardless).

Unfortunately for college football fans, the opportunity to try taking their favorite team to a big-name bowl -- or even better, a national championship -- has been put on hold due to the hiatus of the NCAA Football series. With the final released game being NCAA Football 14, many fans believe that Tajh Boyd will be their Clemson quarterback instead of DeShaun Watson, that they're still stuck with coaches and players that ruined their programs.

Luckily, GameSkinny is here to let college football fans in on a simple holiday gift: that's not the case at all!

The fine people at Operation Sports have created rosters for this past season, so if there are any questions you have, double check their post. There are also links in that post to roster files you can download to a USB drive.

Everyone from All-Conference players to true freshmen - as well as the head coaches and offensive/defensive coordinators of each team - are included in this update. Today, we're going to walk you through how to download these rosters in five quick minutes.

As some of you have probably figured out, there's a few things that are missing from these updated rosters. This list includes:

For reference, anything noted here refers to the latest updated roster on Xbox 360 by cajunomics.

1. Make Sure Your Copy Works

This is an easy one that really should go without saying, but don't think that NCAA Football 14 is cheap just because it's over three years old. GameStop currently lists it at over 40 dollars even with the PowerPro Reward system, while Amazon has it at $63.95 even with Prime!

But fear now, The Xbox Arcade has the game for less than 20 bucks, so download it from there if you sold your copy a while back. 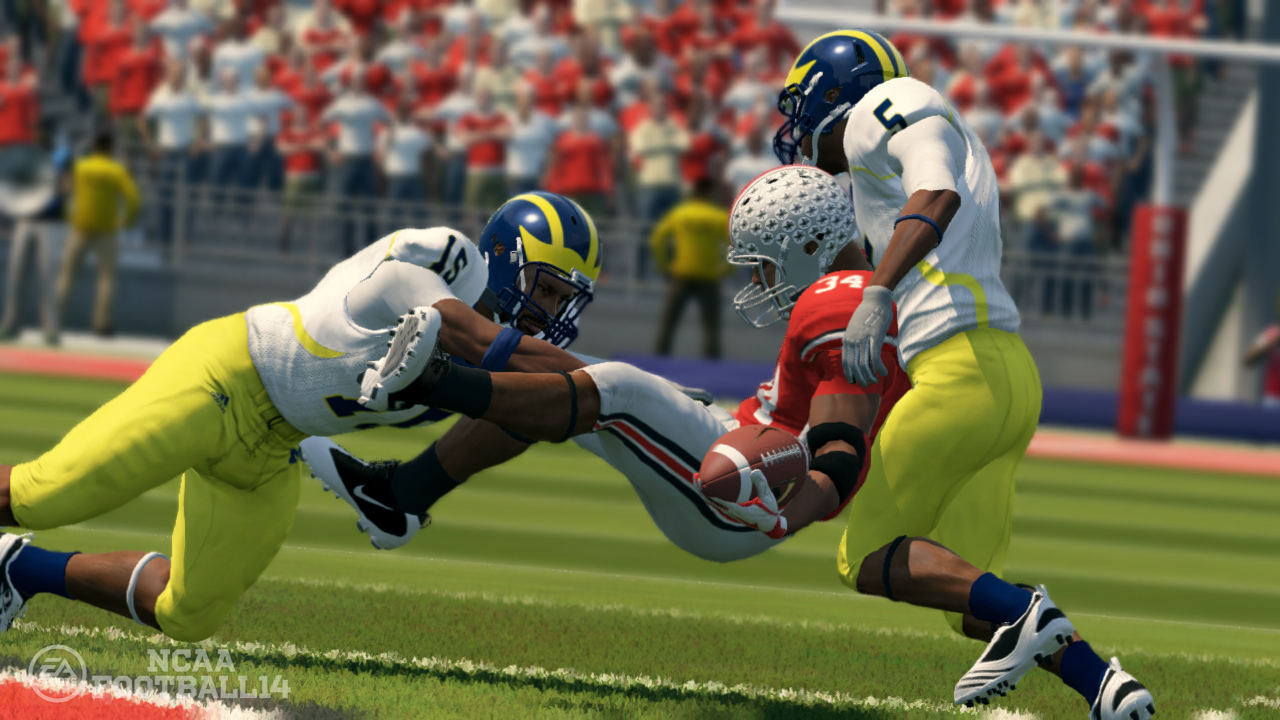 Alright, so your copy of the game works -- or you bought a new one -- and you're ready to try to turn your favorite team into a national championship contender again.

For those downloading from the servers, these are the gamertags you'll need to use.

To actually find where to download these rosters, it's simple: go to team management, hit roster share, hit download roster, type in cajunomics, rename the roster to whatever you want (I personally save them as 'DynastyRoster') and you're set.

While cajunomics has done most of the work for this job, you're also going to need to take on a bit of work. This part is optional, so casual gamers who only want to experience the fun of recruiting can stay away from this with no penalty.

Hardcore fans or gamers wanting a realistic experience, though, are probably going to want to soak this all up.

Now, you have to do some work with the conferences as a whole. Let's start with the Big Ten, where you need to make sure Protected Rivals is on and that the divisions are re-named from Leaders and Legends to East and West.

If you do everything right, the Big Ten should now look like this:

As for the American Conference, you want it to look like this:

For those interested in Conference realignment in terms of what happens in the future, the Operation Sports page has an entire section on that.

By this point, you've done everything that you need in order to set up the 2016 football season... but you still need a school to pick. Going with your own school is one thing, but what if you don't have a school? What if you're looking for a challenge?

If it's up to me, here are five teams you may want to think about rolling with on your virtual campaign:

Fine, the bias is real here, but this is a better team in-game than you'd expect. Though the Owls only have three players above an 80 overall -- two of whom are special teamers, punter Dalton Schomp and kicker Greg Joseph -- there's plenty of great young talent on the roster. Keep an eye on the running duo of junior Gregory 'Buddy' Howell Jr. (79 overall with 80 speed and 87 acceleration) and true freshman Devin 'Motor' Singletary (63 overall, but 88 speed, 85 agility, and 86 acceleration).

Sticking with Conference-USA teams, the Roadrunners - who made their first bowl in school history this year -- have eight players between an 80-83 overall with junior wide receiver Kerry Thomas Jr. leading the way. Fans who like playing outside games may want to avoid this team, as UTSA plays their home games in the Alamodome.

Do you want to help restore Baylor's image? While the program's sanctions aren't included in the game, taking control of a veteran team and telling yourself that it's on you to fix the mess that Art Briles left is a fun challenge. The overall may turn some players off, but remembering what really happened with this program in real-life may bring them right back.

Eastern Michigan is in a similar spot as FAU, what with the small number of players above an 80 overall (the Eagles do have six, though) and playing in a competitive conference. Your real challenge here is quarterback development, as starter Brogan Roback (78) and backup Todd Porter (75) each are juniors who are tasked with leading an offense that has only one non-lineman higher than a 79. Good luck!

From restoring programs like Hofstra to creating your own school, it's hard to ever go wrong with a TeamBuilder school. I've always been a fan of creating my own team, though taking an FCS school like the North Dakota Fighting Sioux and turning them into an FBS powerhouse could be fun. Challenging, but fun.

Which team will you try winning a national championship with? Make sure to let us know in the comment section below!