How important is teamwork?
by The Myrrduck

A large part of video games is teamwork, and no game time places as much emphasis on this as Real-Time Strategy [RTS] games, and specifically Multiplayer Online Battle Arena [MOBA] games. Today, Riot decided to release a video showing their findings on teamwork and the eye-opening results they have.

A term you're likely familiar with if you're played League of Legends is 'toxic'. Toxicicity generally comes about when someone begins to rage at their team, insulting and bashing teammates. This negative attitude is generally infectious. You'll notice how when one player behaves in a toxic way, other teammates often begin to do it back. Toxicity in a game is a great way to lose in a game. A majority of losing teams I've been on - from my high school tennis team to a lobby in Gears of War - have become losing teams due to a toxic player. This has only become more apparent to me as I've been playing LoL. I haven't run into many of these players, but when I do, I cringe and wish to quit the match immediately.

It is painful to watch but easy to see how it happens. Someone gets killed a few times early on, or is playing a champ/role they don't feel comfortable in. Someone else calls them out on something, maybe says an insult or two, and then its all downhill from there. You can't fight the enemy team while infighting your own team. You're basically giving the other team the greatest advantage ever: you're divided so they can conquer.

I have seen the reverse. I've seen someone begin a game badly and with team support and encouraging words, we have a solid comeback. This doesn't always mean we win, but losing by a small margin still feels a lot better than getting steamrolled while two guys argue. 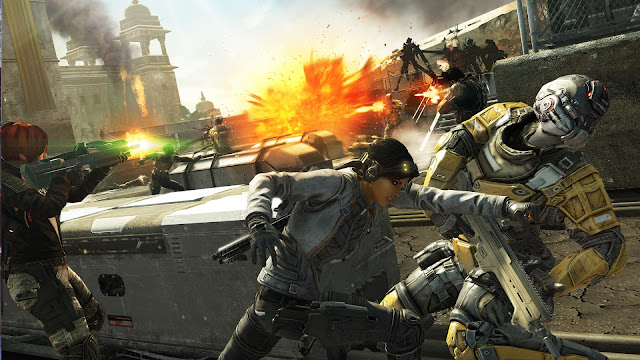 Time to Teamwork all over these guys

Nothing feels quite as great as a well executed maneuver in a game. A personal example of mine comes from a game of Sins of the Solar Empire: Rebellion a friend and I were playing... I was leading the enemy into an asteroid field while my teammate got into position in the three surrounding planets with some of my extra forces. The moment the enemy pushed me and it seemed like he was going to win... boom! He had left his optimal escape range and my teammate came in for the kill.

This exact thing can happen in any game. If you can find a rhythm with your team and work off of each other, then anything from a MMO raid to a simple Xbox Live shooter can become the canvas for your art. Your paint is, of course, the blood of your enemies.

In addition to what their findings were in the video, what have your experiences been with both positive teamwork and toxicity?