The art of the Tap: A beginner's guide to Tap! Tap! Faraway Kingdoms

A little bit of insight and some tips for those gamers just starting out in 'Tap! Tap! Faraway Kingdoms' ... or, don't forget to give love to your knight.
by Justin Andress

So, you’ve heard your friends talk about the game, or you’ve hit up Reddit and been turned on by some comment or avid review, or you’re simply bored and you’ve found a new game to try out. Either way, here you are, considering a download of Tap! Tap! Faraway Kingdoms. Congratulations, you made a great decision, even if it may not seem that way at first.

It’s the classic tale of a knight aided by a motley crew of companions who descends into the deepest regions of the darkest dungeons for … some such reason. Some chick asks you to plow forward because there’s demons or something. They definitely live in a house that has “evil” written all across its skull encrusted facade. Whatever the reason, there’s crap to kill standing in front of you, so let’s get killin’.

Theoretically, Tap! Tap! Faraway Kingdoms has an incredible amount of variation in its gameplay, something akin to kingdom building with multiplayer and all that good stuff.

If you’re just starting out, don’t get your hopes up for a whole lot of variation, because unless you play obsessively you won’t be getting there for quite some time. In the early stages of the game (read: the first 500 levels … yes, five. hundred.) you will not be able to do anything more than plod ever forward into a nest of vile monsters. (At least, we assume they’re vile, because as ugly things they fit the Grecian conception of evil, however, perhaps they were fine being left alone in their mountain with their particular brand of evil interior design …)

At any rate, there’s more to Tap! Tap! Faraway Kingdoms than initially meets the eye. Even when you only technically have one move in your arsenal, there’s a surprising amount of depth to this one.

So, What is The Big Deal? 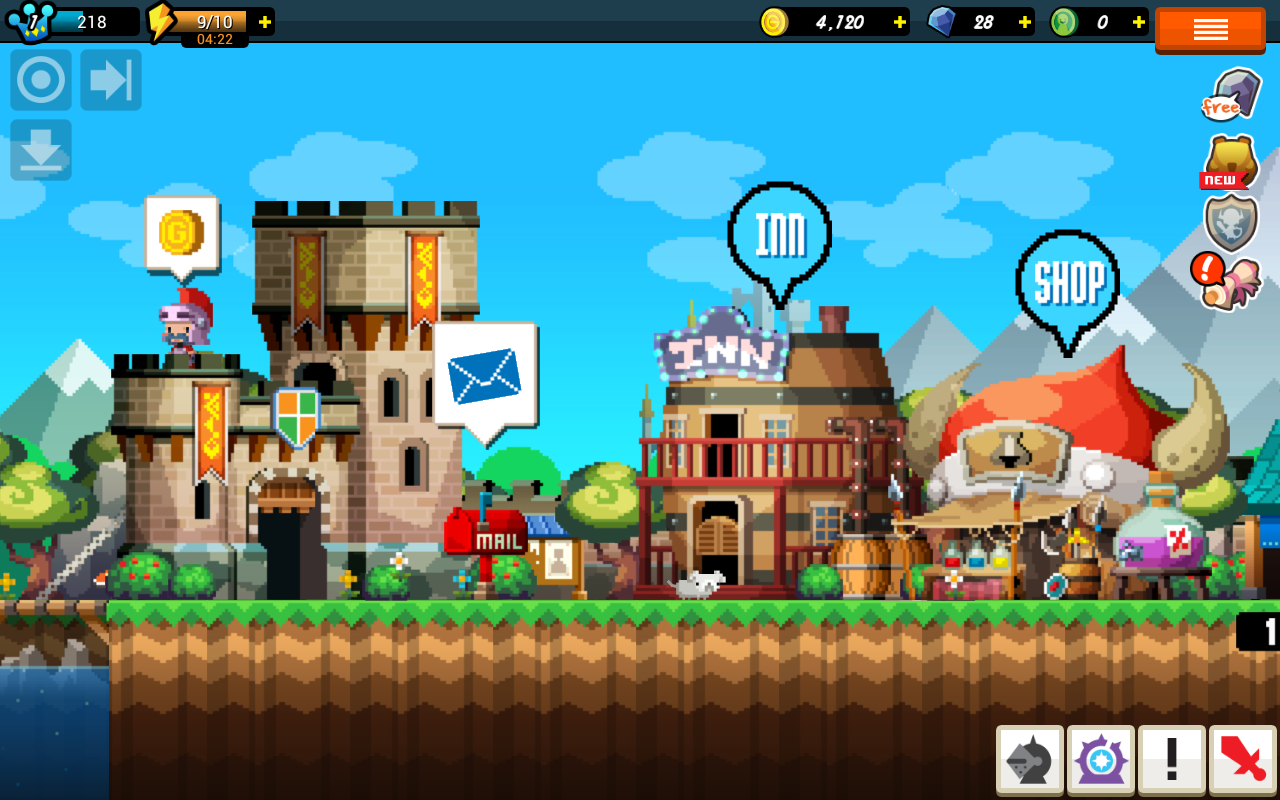 There is no real death in Tap! Tap! Faraway Kingdoms. Enemies inflict zero damage on your hero. They don’t even try to hit you back. And yet, they must be destroyed. Beyond a few select special abilities (which we’ll get to in a second), your only recourse against the forces of evil is to tap the screen. Tapping anywhere on the screen will swing your sword. You can tap as leisurely or as rapid fire as you like, it’s entirely your call, since there’s no threat of retaliation. When you get to the end of one level, you descend a bit and start mowing down the baddies on the next level.

When you run up against a boss — which happens when you get to the end of every other level — your goal is simply to clear his life bar before your 30 second timer hits zero. If you fail, you’re pushed back a step and afforded an endless stream of drooling, non-violent sword bait to vanquish until you can gather enough gold to clear aforementioned boss’ health bar before the timer runs out.

In the timeless tradition of every video game ever, gold is dropped by downed foes and you use said gold to become a stronger little pixel guy. So, it’s just a matter of eventually collecting enough gold to gain enough sword power to get to the bottom of the dungeon. Boring, right? But wait, there’s more! 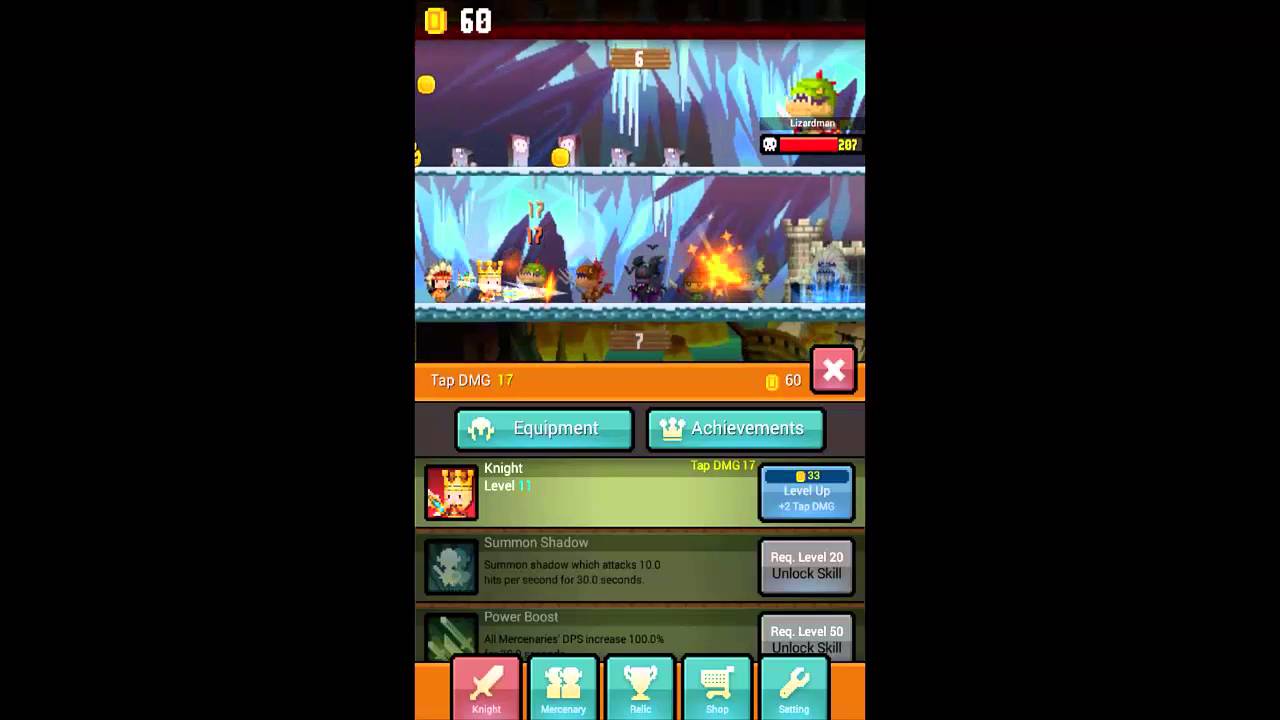 Let’s start here, with your crown-sporting champion. Pretty much right away, you’ll get access to a special ability called Summon Shadow, which you can put into action every ten minutes. Using this little guy — the button to activate it features prominently at the bottom of your screen once it’s been unlocked — hits your opponents 10 times a second for thirty seconds. It’s the first in a long line of odd abilities that do everything from doubling your entourage’s damage or upping the amount of gold you’ll collect from enemies. Each of these abilities is unlocked at various level milestones as you upgrade your knight.

Before you cash in some gold on shiny new abilities or new members of your entourage, remember …

It’s a Marathon, Not a Dash 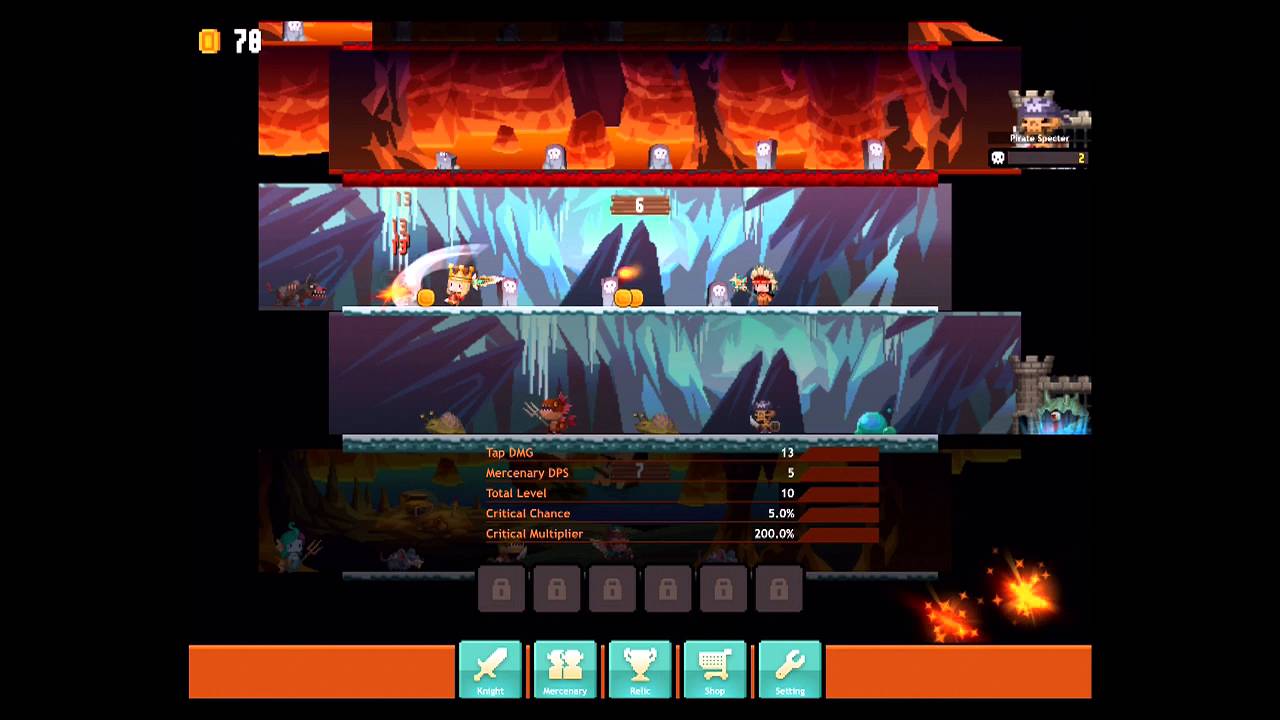 This is super long term, but new players should know that the amount of time you spend leveling up your knight — not adding new abilities, not buying or upgrading new party members, but leveling up your knight — will directly contribute to the speed with which you can reach the latter half of the game’s features. You won’t be able to activate the second tier of Tap! Tap! Faraway Kingdoms’ town building and whatnot until your knight hits level 500 and you gain the ability to Withdraw.

So, as much fun as it is (or will be) to sit back and rely on your mercenaries to do most of your dirty work, remember that the more resources you pour into stuff other than leveling up your knight also means delaying your first — and each successive — journey outside the vault.

However, before you deprive yourself the joys of spending a little cash, keep in mind that the game's developers have designed a long term game, so you might as well settle in for the ride and get some help at your back.

First, the mercenaries add to your damage per second (DPS), constantly tossing long range spells to compliment your knight’s melee attack. Over the course of your sojourn through the dungeon, your’ll be afforded the opportunity to employ a veritable army of mercenaries who can buoy your knight’s efforts.

Second, no matter how anxious your are to get to the next level, buy some extra muscle as soon as possible, because not only do these guys supplement your own exhaustive efforts, they continue to mow down bad guys when you finally decide to put down the game for the evening. What that means is that whenever you sign back on, your mercenaries persistent efforts’ will reward you with a chest full of gold to add to your stash.

In other words, the more mercs you have backing your knight, the more monsters they’ll kill in your absence which means more moolah for spending more often.

Life may be assured in Tap! Tap! Faraway Kingdoms, but success certainly isn’t. The tap-only gameplay — at least for the first week or so — belies a higher level of strategy lurking just under the surface. Sure, your knight may only be afforded a limited number of moves, but by choosing how and when to spend your cash, you are afforded a nearly infinite variety of options on how to proceed in the battle of good verse evil, and that’s important. Even if evil doesn’t actually hit back.

You’ll need to spend your funds wisely and choose your followers carefully as you set the basis for your Tap! Tap! Faraway Kingdoms journey. Get prepared to buckle down for the next week or so, string together your crew, and tap your way past your fair share of demons and monsters and mandragoras (which Google explains is actually a thing …) as you work your way towards level 500 and the next step in your journey.

And we’ll be right back here next week some tips and tricks for succeeding as you begin to build a home for your fearless adventurers and contact the outside world.