Cities: Skylines Parklife DLC - How to Use the New Systems in Your City

Cities: Skylines "Parklife" has arrived. Click through to learn how to keep Skylines' new recreation systems from putting your city in park.
by Fox Doucette

As with most things in Cities: Skylines, learning how to integrate the new mechanics and systems from the "Parklife" DLC into your city can be a case of trial and error ... mostly error.

After all, not only do you have the option to build new park types, treat them like a proper district for the first time, and play an impromptu game of Parkitect inside your metropolis, but there are sightseeing bus tours, new game mechanics involving noise reduction, a bunch of new maps, and some resources for modders.

I won't go into the modder resources; that stuff flies five miles over my head and is a subject you'll want to go to Skylines' existing modding community to get your head around. I'm a writer, not a coder or a programmer or a game designer.

Likewise, the free patch updates can best be summarized as “trees now reduce noise pollution, and the greater the concentration of trees, the greater the effect -- so plant forests between stuff like windmills and your city proper.” And new maps, of course, mean new, fun places to build cities on, all of which work just fine with other DLC, and all of which are just begging you to build a brand-new city to take full advantage of the new features.

Now then, there are two main features to get to grips with here: park districts and sightseeing tours.

We begin with the bread and butter. Creating a park area is as simple as drawing it in exactly the same way you draw any other district in your city: 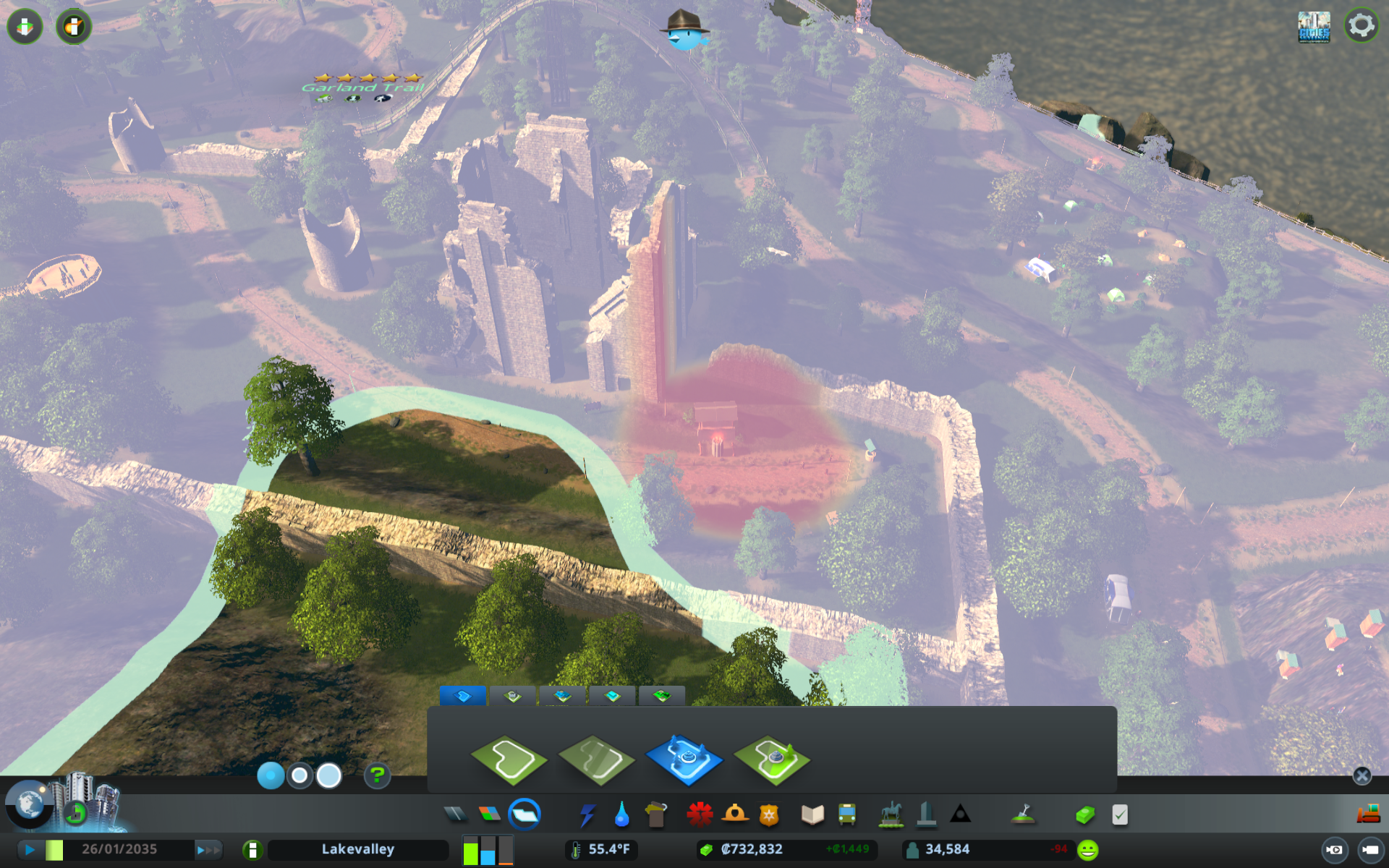 You then choose what kind of park you want. Your choices are City Park (something roughly akin to Central Park in New York City, with walking trails, activities, and trees and such), Nature Reserve (perfect for those parts of the map where the terrain makes it impractical for zoning), Zoo (animals!), and Amusement Park (a place with all the zip of Nuka-Cola.)

Ultimately, which one you choose depends on your play style.

Once you've drawn the district, you'll need a Main Entrance; this can be found in the standard Parks interface, where you'll notice some new tabs, one for each of the different park types. Click around and experiment; Skylines is not a game that benefits from a linear “do this, this, and this” attitude. 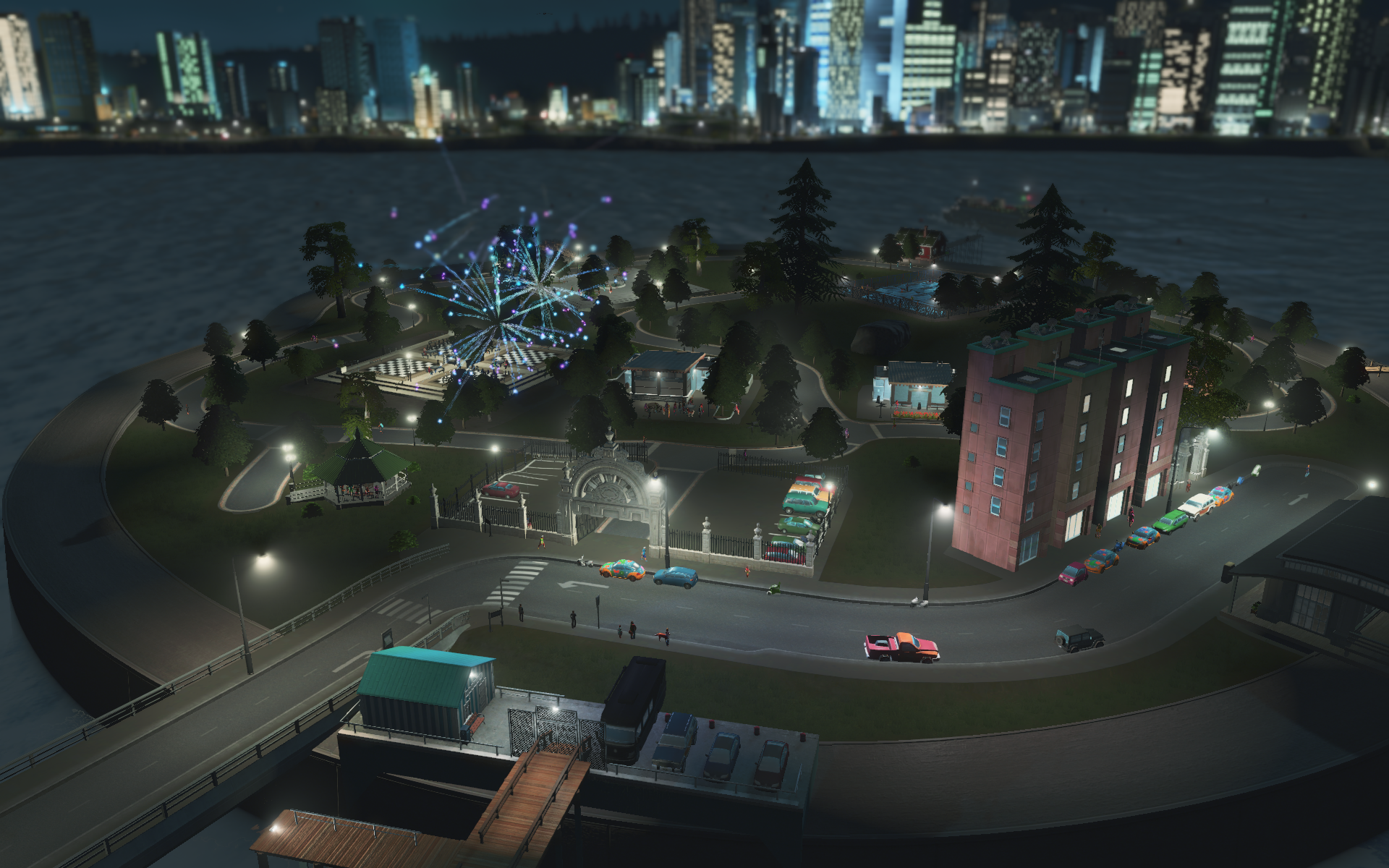 Main gates must have a road connection; you then build park paths to direct walking traffic through the park. You can also build side gates to allow more access points into the park, useful for preventing traffic backups near the park's main entryway.

At first, you'll only be able to place a couple of basic structures, and here is where leveling up enters into it.

Once your park reaches a certain entertainment rating and has received enough visitors, you can level it up, but you can't just plunk down a bunch of the same structure and expect it to work; there's a diminishing returns mechanic in play.

Instead, beautification matters. In a park district, trees, landscaping, and other means of making the land more attractive also add entertainment value. But the bar is set low enough that you don't need to go overboard.

Furthermore, the main gate allows you to set an admission price. The more attractive the park, the higher the price you can charge; the larger the tourist volume and population in your city, the larger the potential customer base.

Or you can make the park free and treat it as a loss leader for attracting people to other city services. The choice is again yours, but costs add up, especially in big parks and at higher levels. The game automatically raises the price for you about 20 percent at each level-up, and that seems a reasonable step size.

"Parklife" includes policies that can be set for each park district. They work exactly the same way as district policies already in place in the game. It's precisely the same mechanic. 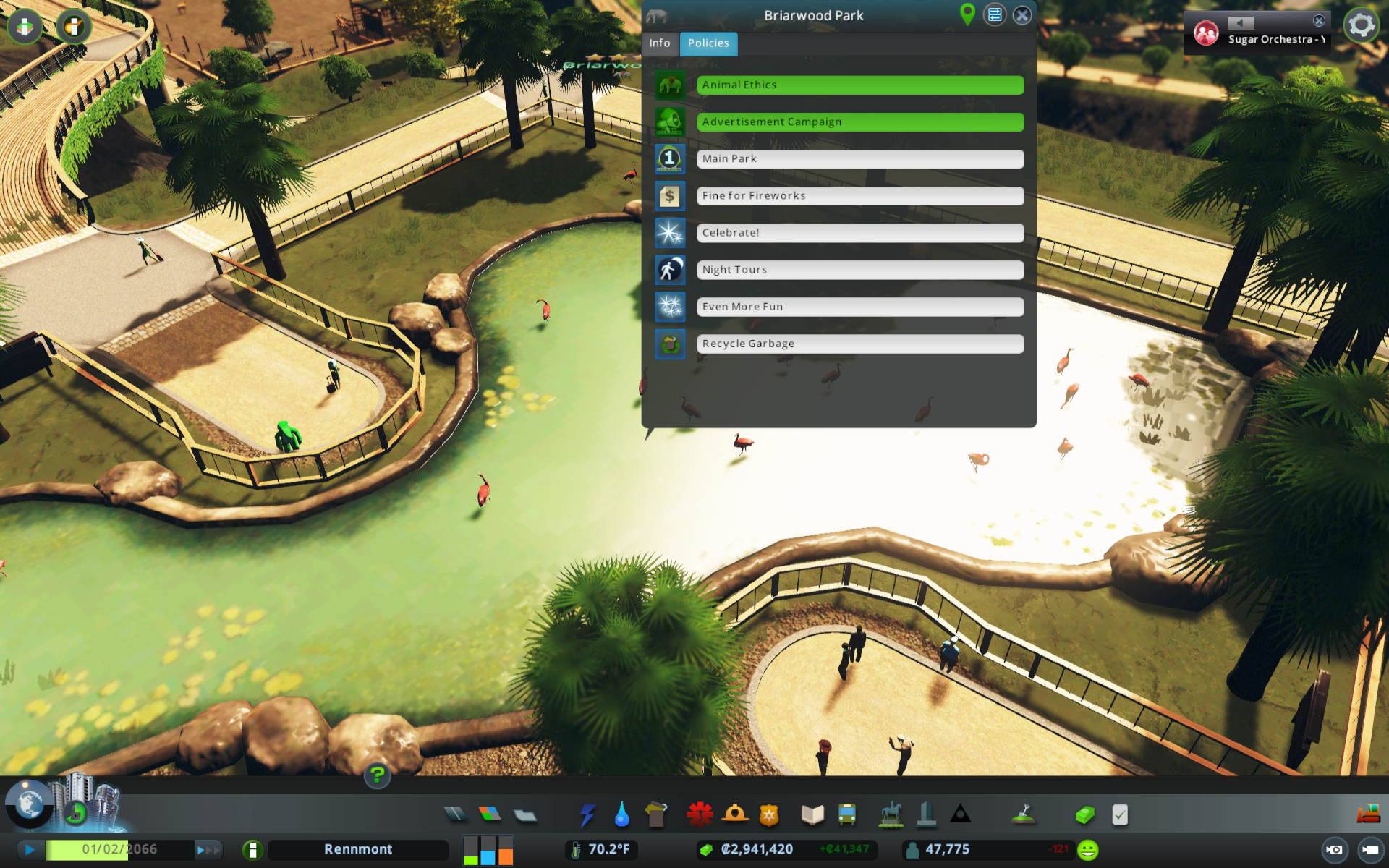 Policies include Animal Ethics for zoos, Advertising Campaigns to increase park visitor volume (especially useful when you've got the park up to the right entertainment value to level up but haven't quite cleared the visitor level bar), and setting a park as the Main Park so tourists prefer it, essentially saying to would-be visitors “this is why you'll want to come to the city."

There's even a park policy that improves non-DLC parks, the ones that have always been in the game, taking a bit of your treasury and satisfaction even higher than ever before.

Do you district? You know this stuff already. So have fun with it; Colossal Order made it user-friendly.

Not only does it work on the "Parklife" stuff, but it also adds a new booster to previous parks like Japanese gardens and basketball courts, giving them a boost to attractiveness as long as they're within the catchment area of the maintenance building.

But for "Parklife" buildings, the maintenance crews create a level that's on a slider in any given building's feedback to let you know how much of a bonus the object is getting.

Done correctly, this is a key part of keeping those entertainment and attractiveness values high enough to climb that level tree.

Besides the maintenance building, there are also new DLC-specific buildings with their own requirements, which unlock based on what you do with your parks.

Most of them unlock at Level 6 unique buildings (the Small City milestone), and as with all other unique buildings, the game outright tells you what you need to do once you reach that point in order to complete the unlock.

The more interesting one, however, is the Castle of Lord Chirpwick; this one doesn't unlock until you've built all of the "Parklife" unique buildings, and besides nightly fireworks shows (which look awesome if you've got the day/night cycle enabled and a decent computer), it increases all other Unique Building attractiveness by 25 percent while raising the city's profile for tourists. 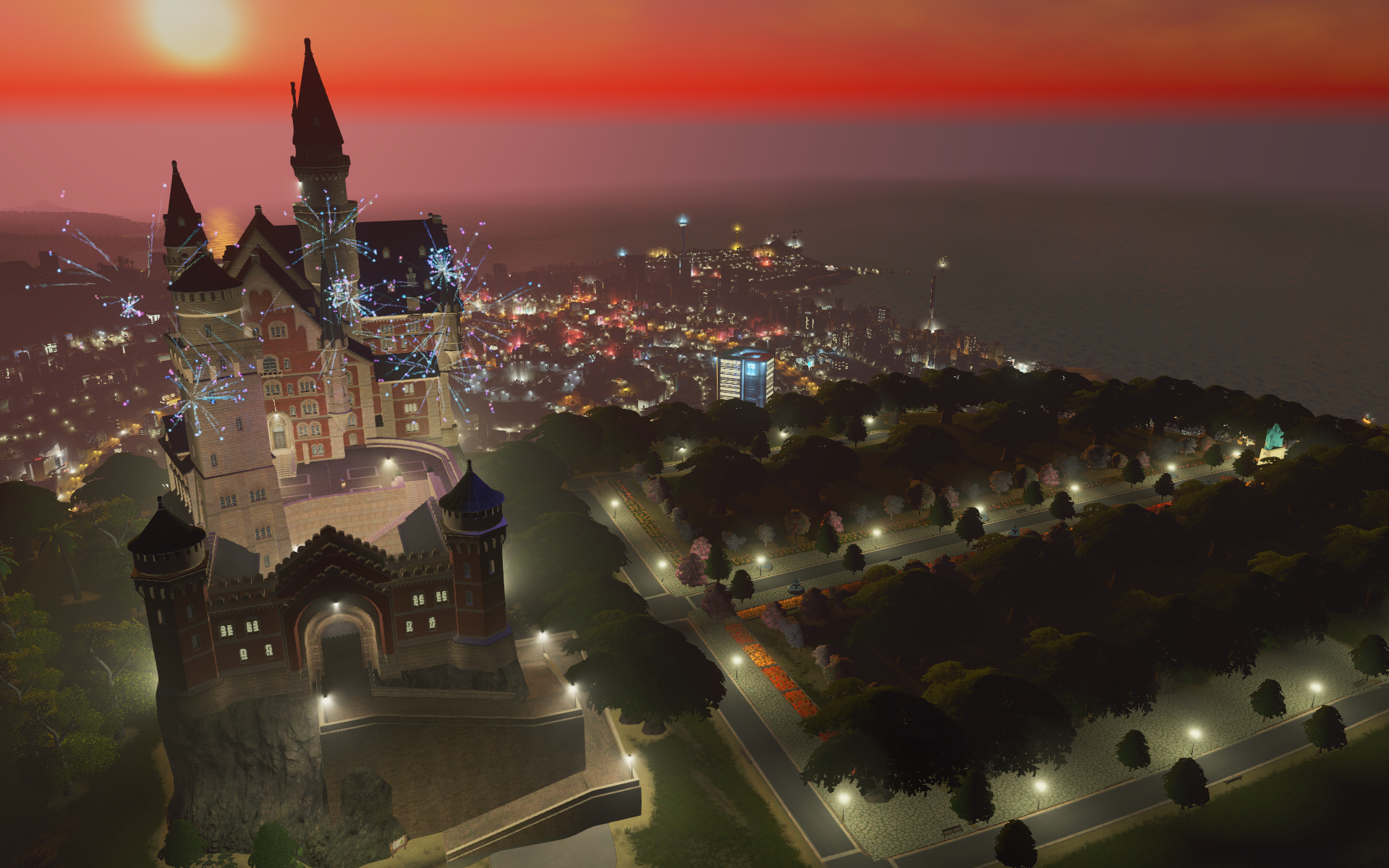 Lord Chirpwick offers a huge reward; if you're playing "Parklife," do everything you can to unlock the castle and make your entire purchase worth the while. Just know that it's like any other monument in the game in that you can't take your eye off the ball of making a great city to rush for it.

There are two kinds of sightseeing tours: walking tours and bus tours.

They both work on the same principle, using existing public transportation mechanics; if you've created a bus line in your city, you have the know-how to make a sightseeing tour.

The difference is that unlike public transit, which is about getting people between their homes and their jobs, the value of a stop on a sightseeing tour is in the attractiveness of the landmarks you push your visitors past.

Which means if you have some well-placed parks in your city, you can line them up for people to visit them, amplifying their effect.

You can also create hot air balloons; these don't have routes, they just take to the air and view the city from above. Of course, the montgolfieres will stay in the general area of their launch pad, so if you put them near unique buildings, parks, and other high-attractiveness areas, you'll get the most satisfaction out of them.

Using these is simple and a great revenue source, and tours also improve the effectiveness of the locations they're guided past.

A New Way to Manage Tourism

Finally, Skylines has given the player a deeper dive into the data for how tourism is affecting the city.

Much like any other info panel, color-coded markers on the map show where the highest-appeal buildings are, making it easy to plan sightseeing tours around them. 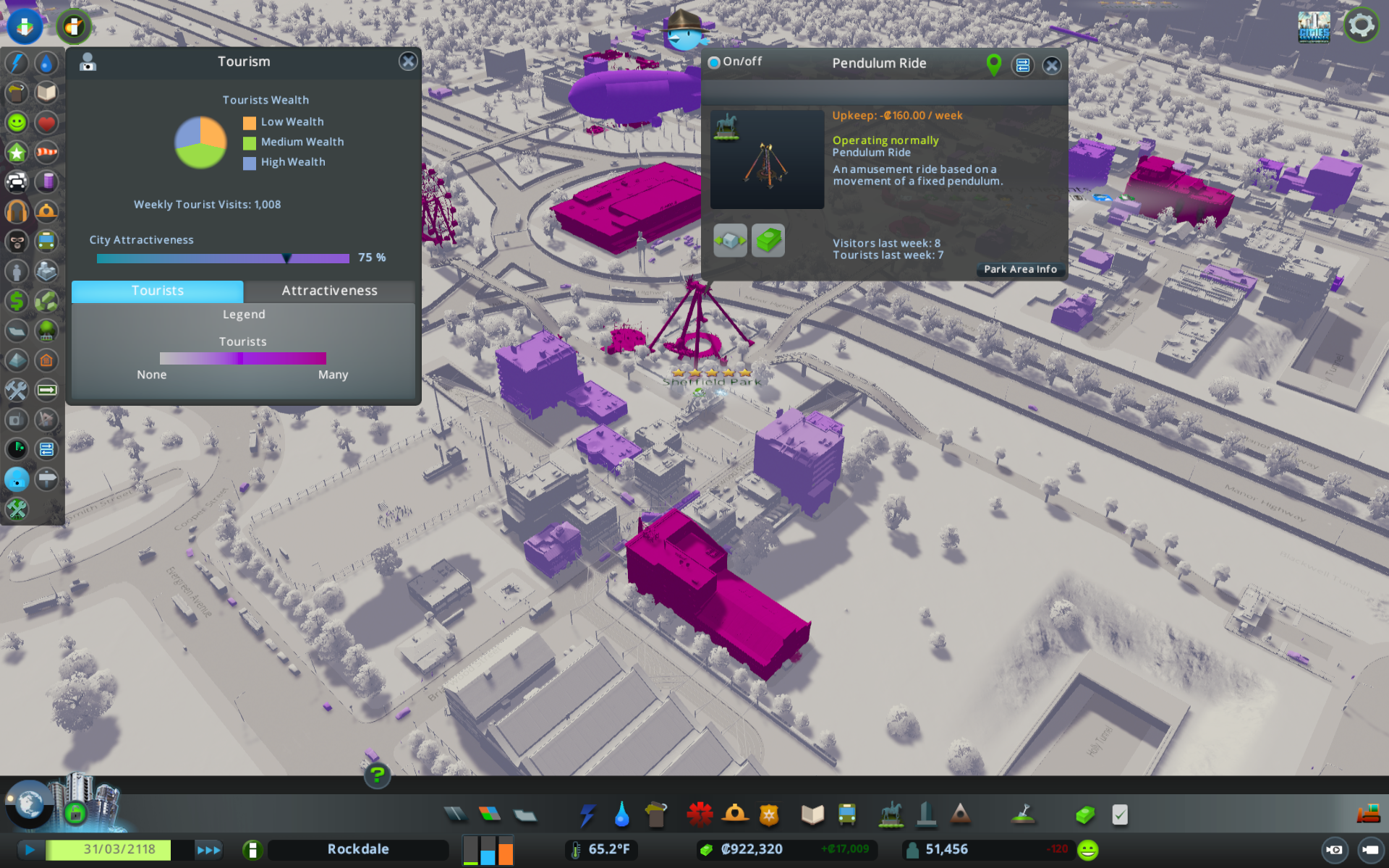 Indeed, you're going to want to consult this view when you're working in that mode, because that's the only way you'll be able to visualize whether your efforts are working or just chewing through your money.

Plus, the budget panel now lets you know how much money tourists are spending and where they're spending it.

As with all things in Skylines, this is something players who have started to climb the learning curve already know; data visualization is how you stay on top of things in this game, from where the water pipes are to how hard the wind's blowing to, now, where the tourist traps are and whether any actual tourists are being trapped.

It's the glue that holds the whole strategy together, so make use of it.

But wait, there's more! The dev team added new assets clearly marked as tourism assets. Notice a bunch of campers, vans, and the like parked near your attractions? That's the game's way of telling you folks drove in just to see whatever their vehicles are parked in front of. 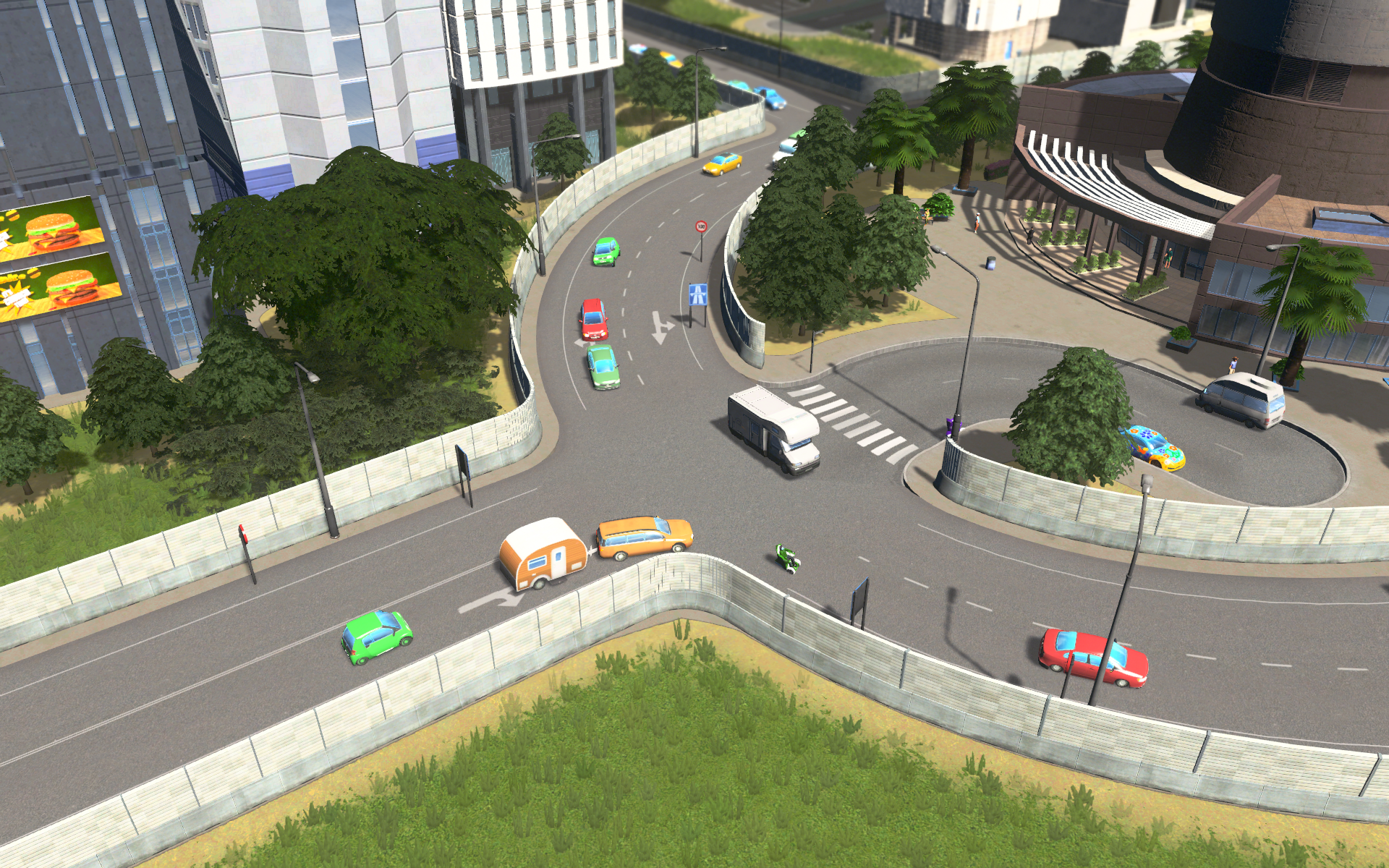 It's all holistic so you're not constantly in menu mode if you know what to look for.

And tourists themselves are now simulated much the same way as your Cims always have been, going about their business and able to be followed and tracked to get a good idea of their flow around your city.

Getting the most out of Skylines or any of its DLC involves knowing what's there, playing around with it until you get a good sense of how it works, then integrating it into your own strategy.

You can do as much or as little of this as you want, of course, but if you're paying for the content, you might as well use it.

So happy hunting! Leave a comment with a screenshot of your city's own Castle of Lord Chirpwick, and stick with GameSkinny for even more info on "Parklife" and other Cities: Skylines guides.