4 Beginner's Tips for Getting Started in WWE Champions

Don't be a Jabroni. Check out this essential beginner's guide before stepping into the ring in WWE Champions for Android and iOS.
by Jonathan Moore

WWE Champions is a new type of royal rumble for Android and iOS devices. Instead of pulling off flashy button combos, you’ll be stylin’ and profilin’ with a flick of the wrist in this match-3 strategy puzzle RPG. Think Bejeweled meets Hulkamania meets light upgrade elements (because features).

Yeah, it’s a little weird to the ear, but once you lay down your first Stone Cold Stunner or Diamond Cutter and stand atop that hell-in-the-cell, you’ll want to know how to be the best wrestling manager Jerry “The King” has ever seen.

And that’s what we’re here to do. It takes training to be the best, so before you get out there in the ring, keep reading for beginner advice that you won't find in the game's tutorial.

Tips for Getting Started in WWE Champions 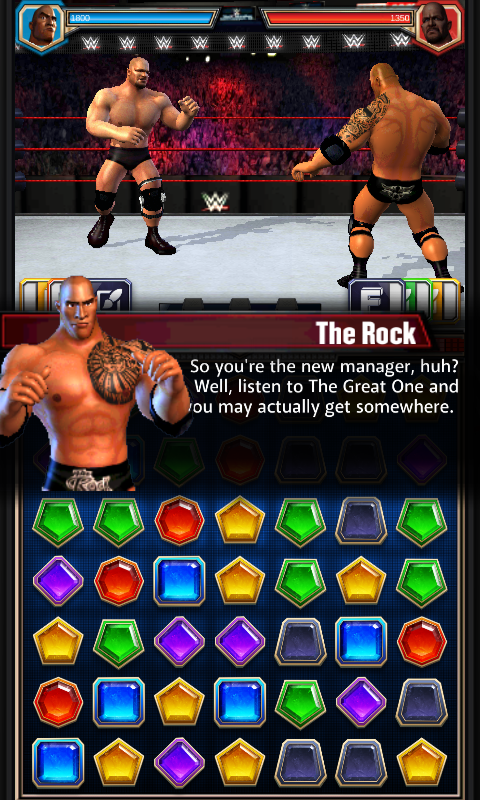 Bouts in WWE Champions are turn-based, with each wrestler getting a turn to unleash devastating moves and finishers. There’s no time limit to finding matches across the board, so take your time when looking for rows and columns of matching gems.

Just like in many other match-type puzzle games, you’ll want to match gems of the same color in the longest gem combos you possibly can. So, be on the lookout for four, five, and even six-gem combos and chains. The bigger the combo, the more damage you’ll deal to your opponent.

2. Pump Up the Crowd (and the Damage) with Specials and Finishers 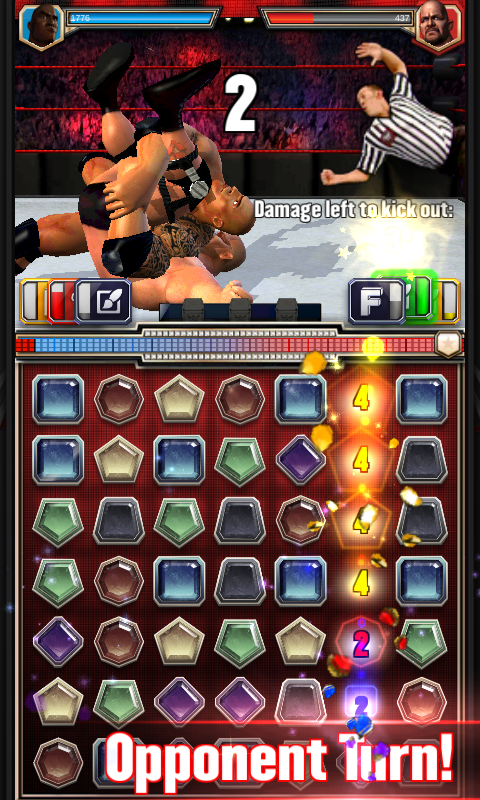 Make sure you’re also paying attention to the color of your specials and finishers. There will be three moves (two specials and a finisher) on top of the pin bar (between the gem board and the wrestlers in the ring) that are each different colors. These color correspond to the colors of the gems you’ll need to break to power up those specific moves.

So, if your finisher is red, you’ll need to break red gems to power your finisher. Breaking gems that are colors not used by your specials and finisher simply deal regular damage, but don’t account for any powerups.

3. The New World Order is Made of Classes – Choose the Right Wrestlers

You’re building a team of wrestlers to take on the world and dominate the rankings. This isn’t some mamby-pamby walk in the park. So choose the right wrestlers for the job.

Just like in the real ring, not every superstar wrestler has the same strengths and weaknesses. In fact, there are classes of wrestlers that are stronger and weaker against others in WWE Champions. Choosing which type before each match is crucial to your victory.

Tag in these superstars to piledrive your opponents into oblivion:

Each wrestler class is also associated with a specific color. This color means that if you break a gem that’s the same color as your wrestler’s class, the damage from that subsequent attack will be increased.

What’s more, each wrestler has a talent score (in the box above their heads), which lets you quickly gauge how powerful that wrestler is against his current opponent.

And a Few Quick Bonus Hits to Send You on the Road to Glory...

Always level up your team whenever possible.

Don’t let your money or gold coins go to waste. It is crucial for your success that you increase your wrestler’s talent and special/finishing move acumen via the management screen.

It may be tempting to do, but while using recovery packs DOES get your wrestler back into grappling shape immediately, it’s damn hard to come by the packs naturally. Use them strategically, especially when you’ve got a big match against a hulking superstar. Superstars can also be healed by enlisting faction help or simply waiting a few hours time.

This is basically your easiest and fastest way of getting cold hard cash, the currency you’ll need to unlock more wrestlers. They’ll also help you unlock mission bags, which have other special loots in them.

Don't leave matches, but do replay them.

Don't leave matches prematurely by closing the app. Doing so will drastically reduce your wrestler's HP, even if you've just used a recovery pack.

Replay matches to get loot and overall experience to your player rank, which helps you unlock new game modes.

That’s it for this beginner’s guide to WWE Champions for Android and iOS devices. Stay tuned to GameSkinny for more guides!