Nerf This! How to Play D.Va -- Overwatch's Resident Gamer Girl

How to "NERF THIS!" and master the skill set of D.Va, Overwatch's resident gamer girl and MEKA pilot!
by Sean Handler

Overwatch, Blizzard's newest title for PS4, Xbox One, and PC has a roster of over twenty heroes to choose from. One that is favored by many is Hana Song, otherwise known as "D.Va" -- who is a professional gamer turned Overwatch agent and saves the world in a blindingly pink mechanical suit called MEKA.

D.Va is classified as a Tank in the Overwatch roster, and it isn't hard to see why. Sporting 500 health and a range of powerful offensive abilities, D.Va can be a force to be reckoned with in the right hands. Let's take a look at what makes this former gamer so formidable on the battlefield.

Though their damage is rather small (0.5-3 DPS), the constant rate of fire makes them difficult to avoid and can make quick work of fast opponents such as Tracer or Genji.

As with any respectable mechanical construct, D.Va's MEKA comes with boosters that allow her to propel forward for a few seconds at a time. She can also use them to ram into enemies, knocking them back. Despite her MEKA's large size, the boosters allow it to be very maneuverable and D.Va is quite capable of getting into tight spots or unique areas where she can do lots of damage to the opposing team. The boosters last for about 2 seconds and have a 5 second cooldown time.

D.VA can activate this shield projection that has a range of up to 15 meters. It lasts for three seconds, with a cooldown time of 10. It is quite useful for blocking enemy projectiles and adding cover for more vulnerable players to hide behind.

If you hear the words "Nerf This!" get ready to run, because that's when D.Va ejects herself out of her MEKA suit and blows it to kingdom come, annihilating any opponents unlucky enough to be caught in the blast radius. It is her strongest ability, coming in at a whopping 1000 damage and a radius of 20 meters. 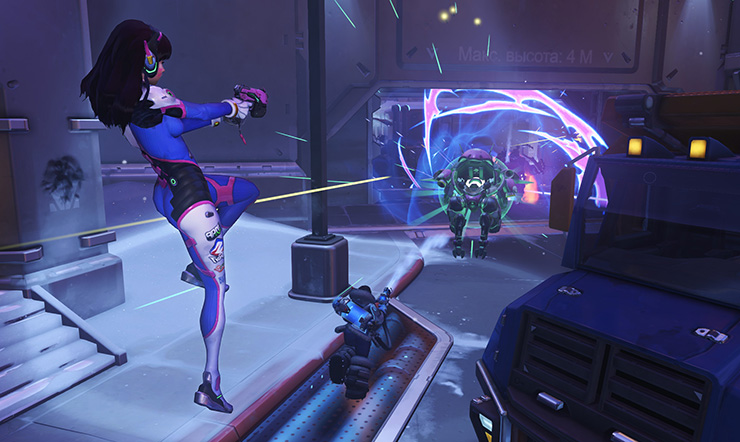 Here is a video demonstrating all of D.Va's abilities in action.

However just showing off the techniques isn't all there is to playing this character. D.Va does require some amount of strategy to employ correctly. She may be a Tank, but you can't rush into the battlefield head on. Her MEKA is a lot more vulnerable than it looks, and a few heavy shots of gunfire can take it out. Plan your positioning accordingly, and then let the bullets rain. D.Va's infinite ammo gives her a big edge against those who have limited ammunition, and she can easily take out opponents who are in the process of reloading.

Also, don't forget the importance of the self-destruct. It is incredibly powerful as well as dangerous. D.Va herself can be caught in the MEKA's explosion, so when you eject, get as far away as you can or you'll end up among the death toll. However, sacrificing yourself if necessary can be useful.

What really makes D.Va a powerhouse is the fact that she is so easy to pick up and play. She is designed as a low-star requirement hero, making her great for beginning players who need to to get a handle of how Overwatch works. On top of that, her easy to use skill-set is pretty well rounded against most of the characters in the game.

There are a few who can take her out fairly easily, though. Torbjorn and his turrets can wipe D.Va's MEKA off the map, and Widowmaker can snipe her from a distance. Pharah can also be incredibly difficult to fight against due to her airborne capabilities.

Overall, D.Va is a really fun character to play -- and as a gamer girl myself, it isn't hard to see why she quickly became one of my favorites to main.

I'm a graduate of EMU with a degree in Creative Writing combined with a complete and utter nerd. I love gaming, comics, anime, manga, and cosplay. I hope you enjoy my articles, so feel free to leave comments and the like! :)