Check out this Mass Effect: Andromeda beginner's guide to get all the tips and tricks you need to start your journey off right.
by Synzer

Mass Effect: Andromeda brings back core mechanics from previous games in the franchise, while also adding new, interesting concepts. There is plenty to do in this game and most veterans will find much of it to be familiar.

Anyone new to the game can get overwhelmed with everything available, so I'm going to go over some tips that anyone starting the game should keep in mind. Even if you have played past games, there are some new things you will want to check out and understand. 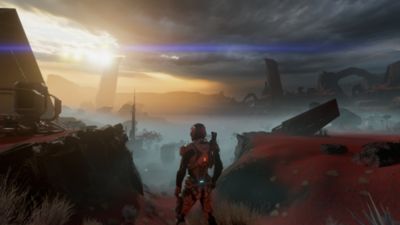 When you create your character you can choose a training background. This is mostly what you want your starting power and unlocked skills to be, but it also determines what free Profile you will unlock later. The unlocked skills section means which skills you can start upgrading, not what skills you start with. You only start with one free ability.

Note: You will be able to obtain any of the skills in training later -- it will just take longer to get them if you don't start with them.

Charge, for example, usually requires nine points in Biotics before you can unlock the skill. Scrapper instead gives you the ability at the start and unlocks Charge so you can upgrade from the beginning.

Below is a list of what Profile each training unlocks. You can still unlock all of the Profiles, but you'll have to put points in different skill areas. Check out my Mass Effect Andromeda Profile Bonuses guide for more details.

There are three skill areas in which you can put points as you level up and complete quests.

Shields and Armor in ME:A

Sometimes enemies have Shields or Armor. This is indicated by a different colored shield or armor bar above the enemy's health bar. These must be taken down before you can damage their health bar.

Shields are Blue and can be taken down by skills like Overload. Certain guns or upgrades can also do extra damage to shields. Most skills and guns tell you how effective they are against shields and armor.

Armor is Yellow and can be taken down by skills like Incinerate. Just like Shields, certain guns or upgrades can deal extra damage to armor as well.

Keep in mind there are also some abilities and guns that will not do much damage to the enemy if they have shields or armor.

The jetpack really changes combat in Mass Effect: Andromeda and also helps with exploration. Remember you can always dodge in combat, and use your jetpack/biotic powers to jump around the battlefield. However, it is not a good idea to spend the whole battle doing this unless you have a good defense, as doing so may put you into certain precarious situations.

Be Sure to Scan and Loot Things -- Everything

Scanning is important because you get new info and materials. These materials are used for researching blueprints and crafting various items.

Looting is something most RPG players are familiar with, but was only big in the first Mass Effect game. It makes a return here, so don't forget to loot after battle.

A huge part of Mass Effect: Andromeda's combat system is setting up ability combos. Some abilities can "prime" an enemy for a combo, while others detonate them.

An example of this would be freezing an enemy with Cryo Beam, then hitting them with Overload. This deals extra damage and can sometimes cause extra effects. Learning how your abilities -- and your squad's abilities -- interact with each other can considerably change combat.

Take Some Time to do Side Quests in The ME:A Universe

Some people may not like doing side quests, but there are often great benefits for doing them. One of the early simple side missions gives you three skill points, so I'd say they are mostly worth it.

Early in the game, you will get the option to send soldiers out on Strike Missions. These missions can give you multiple rewards, such as money and items.

There are also special Apex Missions that give you greater rewards. These missions have a special symbol next to them and can be completed in multiplayer, as well as by the Strike Teams. You do not need to do them in multiplayer if you don't want to -- it is only an option.

Leveling and Leveling Companions is Important

When you level up, you get Skill Points to put into any skill of your choice. But don't forget about your companions! They will also get points to put in their own skills, so be sure to upgrade them.

You should also look at what each available squadmate can do. You cannot change their weapons, armor, or what types of skills they can use, so pay attention. Picking the right squadmates can greatly change how hard a fight will be.

These are all the tips I have when starting Mass Effect: Andromeda. Let me know if you any other questions or tips of your own!