Splix.io strategy tips for any player who finds themselves dying too much

Outwitting your opponents in Splix.io, one block at a time.
by Tobbpitt

Splix.io has quickly become one of my favorite .io games and that seems to be the case for a lot of my friends as well. The game has a while to go to reach the level of popularity of some other .io games but it's racking up player numbers like it's nobody's business.

If you're new to the game you're already well-behind thousands of others in terms of skill and experience. The first little learning curve lies in how to actually play Splix.io, which a lot of players I come across in-game seem to have trouble figuring out past just moving around and converting grey blocks to their color.

This guide is a step above how to play the game and instead is going to focus on various tips to make your time with Splix.io not only more fun overall but to help you last longer to take and hold a place on the leaderboard. As with any other PvP game there are strategic intricacies you can learn and master to get further than the average player with ease. Knowledge is power!

[Before the big tips] A touch on expansion

In this guide we're going to refer to your colored area as your "territory" because it is distinctly yours just as other players' areas are distinctly theirs. Taking a more territorial mindset when going into Splix.io sets you up to want to expand, protect, and destroy. That's exactly what you need to do.

Your primary task is expanding your territory, which is easy enough to do in small portions but takes some strategic thought to do successfully over a period of time longer than one to three minutes. You want to expand, you need to expand, and you want to stay alive while doing it.

New players tend to take one of two strategies when expanding:

The big question for you here is: "So how am I supposed to expand, then?"

Tip 1. Be obsessively aware of your surroundings

In a game where even a slight misstep can lead to your demise, you need some keen awareness to stick it out for the long haul.

By awareness I mean keeping tabs on where other players' territories (and the players themselves) are located in relation to you and your own. Ask yourself the follow questions before you expand:

You have to ask yourself the above questions, albeit very quickly, each time you expand. It's imperative you know what's going on around you to expand safely.

Note about the minimap: 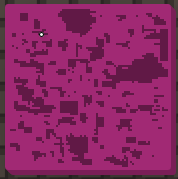 The map does not update every second. Instead it takes a few seconds to update.

You should keep this in mind as you'll notice that, when you take out another player who held a large chunk of territory, it takes a few seconds for that territory to disappear on the minimap.

This should be a fairly obvious follow up to the first tip, but just to make it totally clear: The players surrounding you are going to dictate how you expand.

You should not expand toward other players unless you either:

A big part of doing well in Splix.io boils down to threat mitigation, which basically just means removing other players before you slip up and let them at your tail. Another big part is not being hasty and ramming yourself at someone 20 blocks away.

Overextending in this sense means straying too far from your territory, and in Splix.io that means having your tail out and about for players you can't even see to kill you. For instance, you never want to be the pink player in the image below.

Your best expansion strategy involves going far out from your territory very rarely. I highly recommend you only stray out far from your territory when specifically trying to kill another player, especially if they themselves are overextended. In these instances you go out, kill them, and immediately turn around and go back to your territory to keep your tail safe.

As a last note on this, you're going to see a ton of players super overextended, probably because they are new. Always kill other overextended players when they get near you to both punish them for bad play and to secure your territory.

Tip 3. Oddly-shaped territory is better than perfect squares and rectangles

If you find yourself always making perfectly shaped squares and rectangles as you expand, you may want to consider this tip a wake up call.

The grid-like movement and territory claiming in Splix.io seems to direct you to keeping your territory neat and orderly, but the fact is you need a more proactive playstyle to excel. And if you're sitting there just making your square area bigger bit by bit, you're not excelling. You're just waiting for someone to come by and mess with you.

Tying in with tip 1 (being aware of your surroundings) and tip 2 (threat mitigation and overextending) is tip 3's heart and soul: pay attention to players around you, expand toward them, and kill them before they have the chance.

This sounds a bit different from "oddly-shaped territory is better than perfect" but it fits right in. As stated before, if you're just focusing on making your territory bigger bit by bit you're not doing it right.

Most players don't expect you to start spreading your color directly toward them, much less expect you to be aggressive once you get there.

Here are some image examples to more easily show what I mean by expanding in a more quick and dirty (but effective) way.

The image below is right after I started. Notice I made a rectangle to the upper left of the starting 10x10 territory the game gave me, then immediately make another rectangle on the opposite side.

In doing this I get to scout out my left and right while still being fairly safe.

From here I continue around the odd edges of my territory to fill in the blanks -- but I rarely do it perfectly to give myself growth goals as I go along and because my time is better spent looking around.

I see a pink player and territory below me and, as you can see, leisurely and safely expand towards them.

In these screenshots, notice I never stray all that far from my territory. I am doing three things in the above shots:

You don't want to do your expansion at a snail's pace and you don't want to get too excited and overextend either. Just make small to medium-size rectangular offshoots of your territory to scout out and expand efficiently and safely.

Territorial disputes (fighting another player for territory) come in many forms, but the most common is "dancing".

In both of these instances you are both looking for the other player to make a mistake, and if you play it right you can be the one to come out on top.

You have two options when the time to dance starts:

The second option is not only far easier, it's worked for me far more than engaging other players in a territorial dance.

When you move away from other players and into your own territory (or even expand a little away where they can see) they assume you either don't know how to play or just forfeit that area. They rarely ever expect you to turn back toward them and take them out.

I've done this dozens of times. Here's one instance of this happening in my last game where I'm orange . 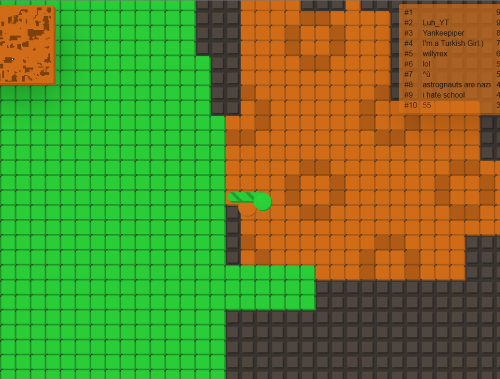 I backed away and let him take some territory (as you can see with the green blocks inside of my orange), then turned around and sniped his tail before he could react.

This method is not only extremely effective, it's insanely safe. You have no tail in your territory but other players certainly have one when they come into yours, so make use of that knowledge and this strategy to prolong your time and deal with threats.

These are some simple but length tips for you to succeed in Splix.io. The amount of players I see die because they're not thinking about what they should be doing next is absurd -- don't be one of these guys. Use your head (and your tail) and think about what you're doing, think about what you want to do, and figure out how to outsmart your enemies before they do the same to you.