Top Ten Tips for Gwent in The Witcher 3: Wild Hunt

Struggling to win that rare card? Want to steamroll every opponent you play? Just need some help? Here's my Top Ten Tips for Gwent!
by Ford James

Gwent is all the rage across Nilfgaard, Temeria and Skellige and for good reason too. It’s simple yet very satisfying when you win and take your opponents rare card. There’s undoubtedly a lot of luck involved with the cards you and your opponent draw, but it’s definitely a step forward from Dice Poker in The Witcher 2! I’m at the point in The Witcher 3 where I beat everyone I play no matter which deck I use, so for those struggling, here’s my top ten tips for Gwent! 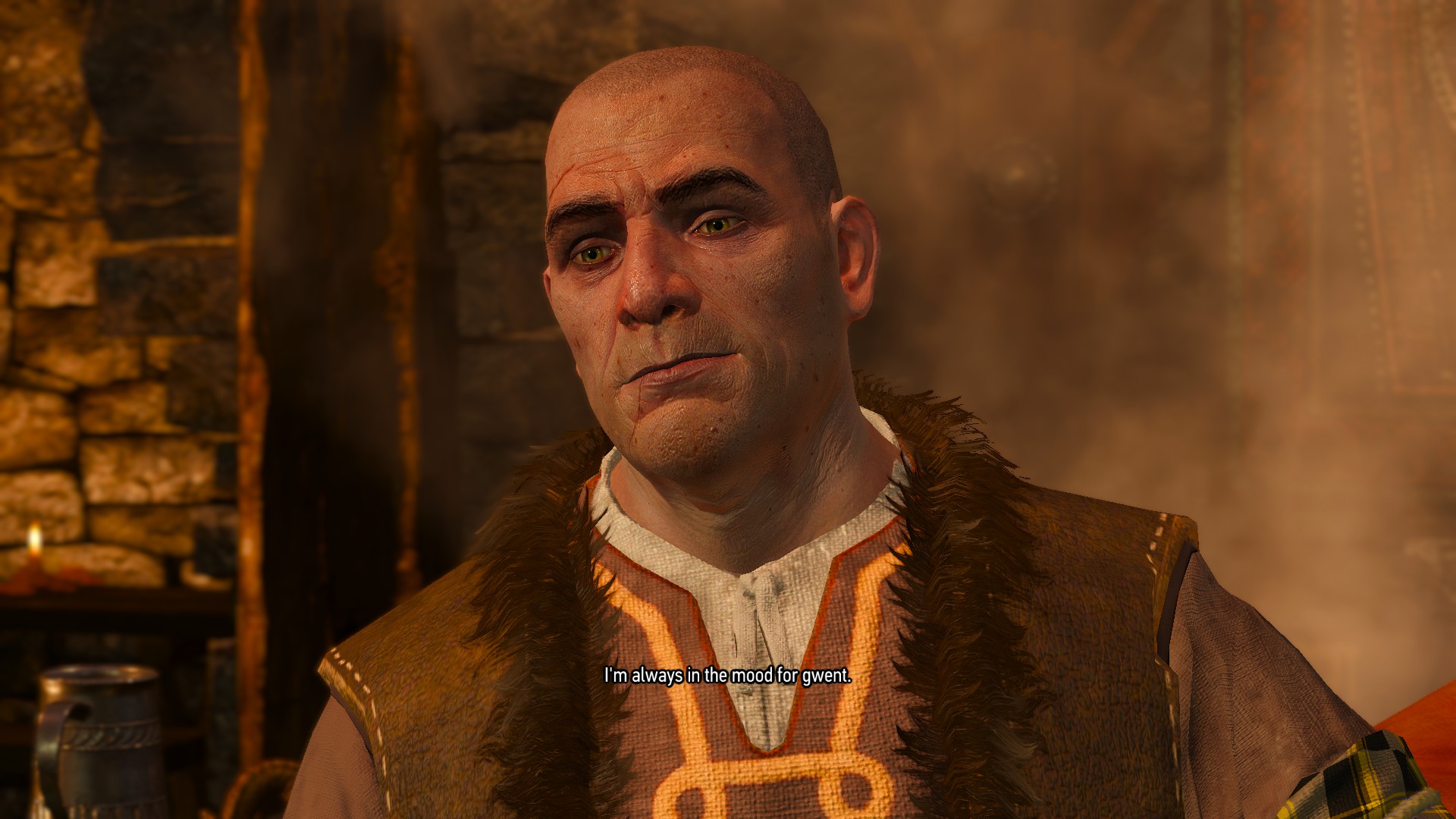 Jonas the Innkeeper knows how to live life

If you know which deck you’ll be playing against, plan accordingly!

There will undoubtedly be a point in the game where you find yourself losing a game or two, then jumping straight back in again in the hopes you get a lucky draw. Instead, take a couple of minutes to plan for which deck your opponent is using, as they never change. An example of this would be if your opponent is using a Monsters deck; Scoia’tael tends to fare poorly against Monsters as there are a lot of Close Combat cards in both. This means while a Biting Frost weather card will take his score down by a lot, it’ll also do the same to you. This can also work in your favour however; if your opponent is using Scoia’tael and you have a complete Monster deck, whip it out! 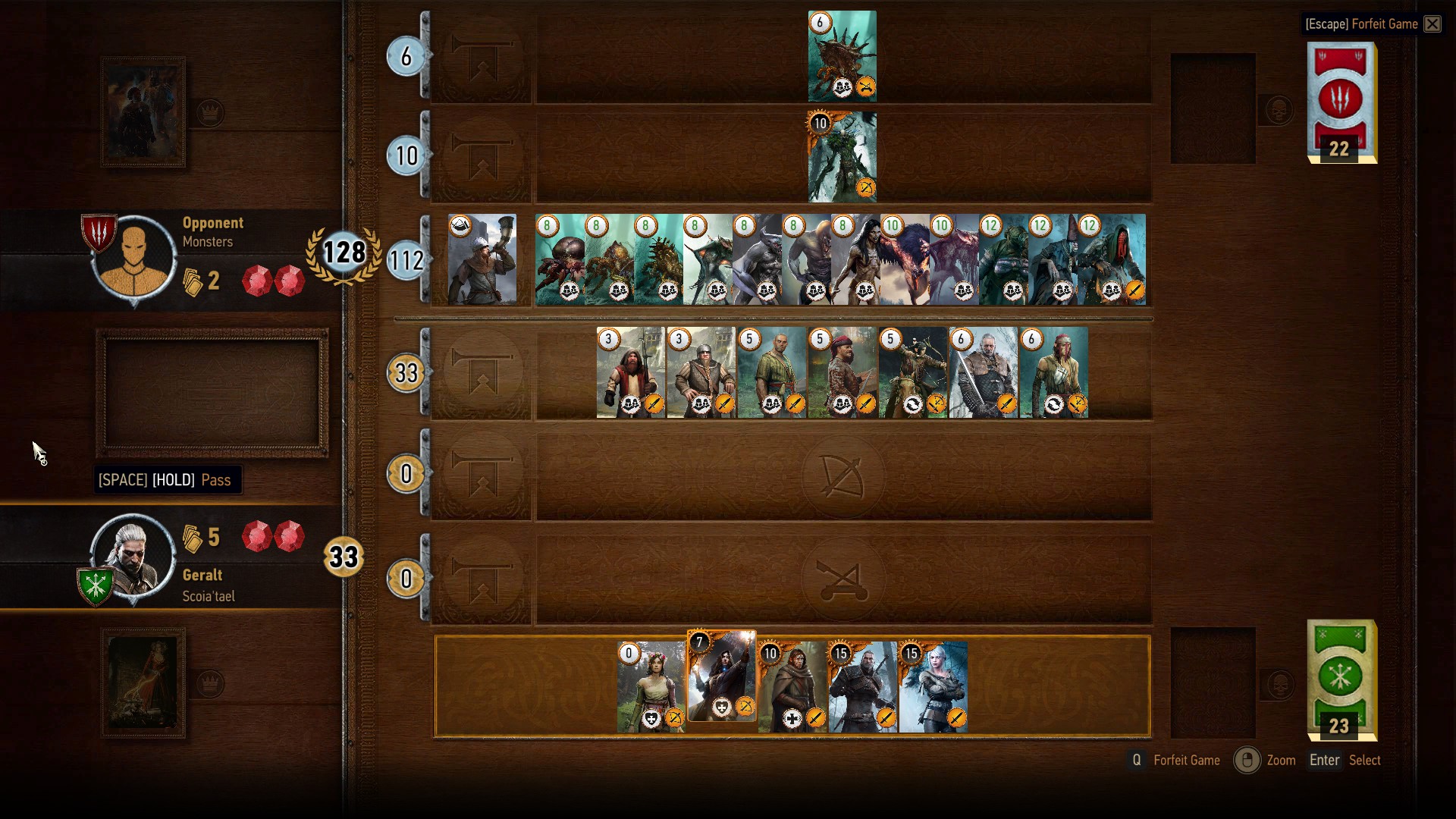 As you can see, I had a hard time with my Scoia'tael deck vs this Monster one

Know when to tactically lose a round

Losing a round doesn’t sound like a good thing, however it can be helpful in the long run. Your opponent may go all out in the first round and play some of his strongest cards, taking a 20-30 point lead in the process. If that happens, let it! Play some spies if you have some, maybe waste some of your rubbish cards to entice him to play more cards down, then simply pass your turn and let him have the round. If done correctly, you’ll be left with a few more cards than him and unless he got incredibly lucky with special cards, the rest of your cards should also be stronger than his, leading to an easy victory in the second and third rounds. 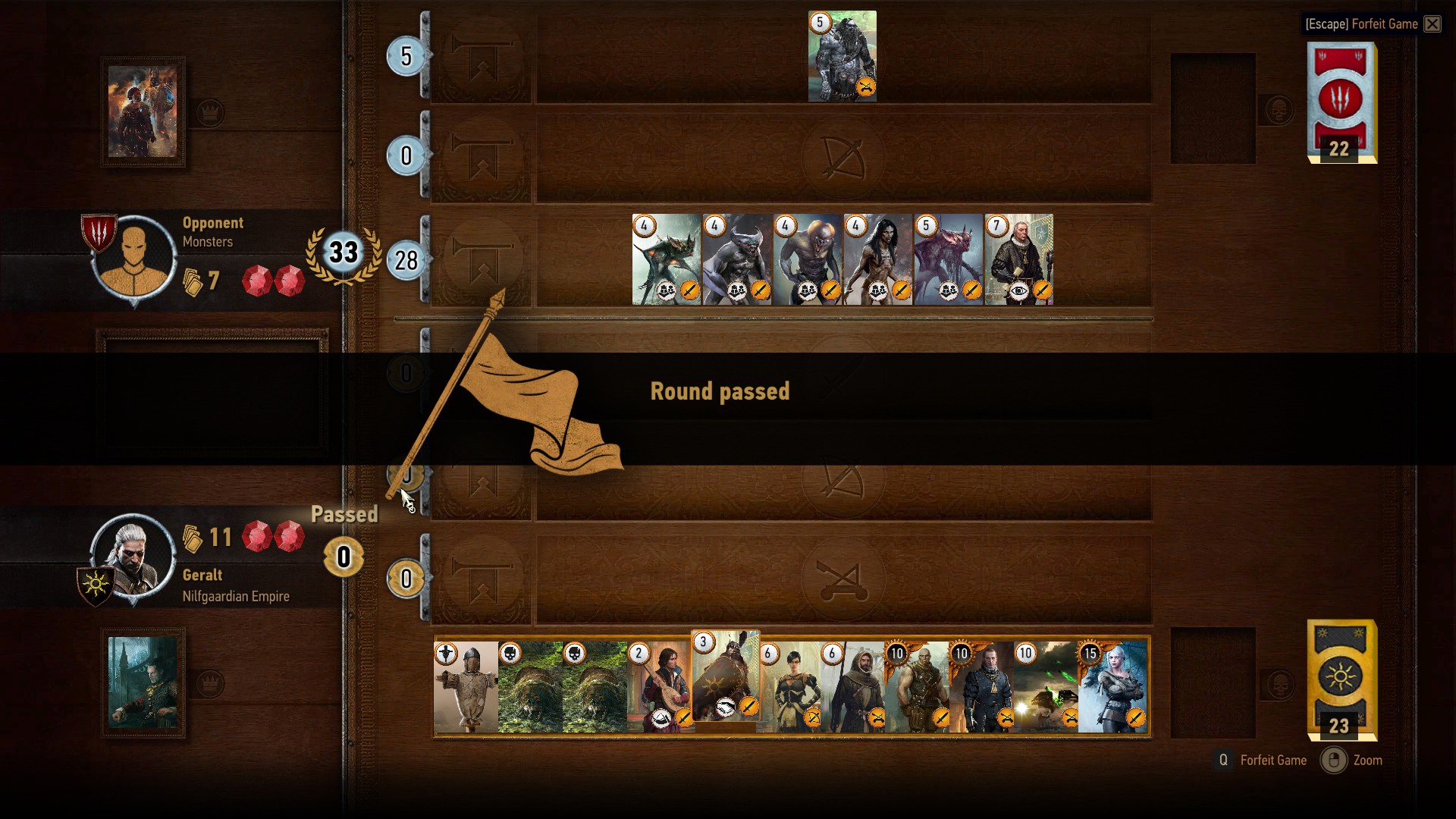 Spies are your best friend

When playing with the Nilfgaardian Empire or Northern Realms decks, spies are incredibly powerful cards. They give your opponent some extra attack power but allow you to draw 2 more cards from your deck. A strong strategy is to play all your spy cards in the first round while your opponent continues to play normal unit cards, then once you’ve exhausted all your spies, tactically concede the round. This should give you considerably more cards than your opponent for the final two rounds, leading to a cakewalk victory. 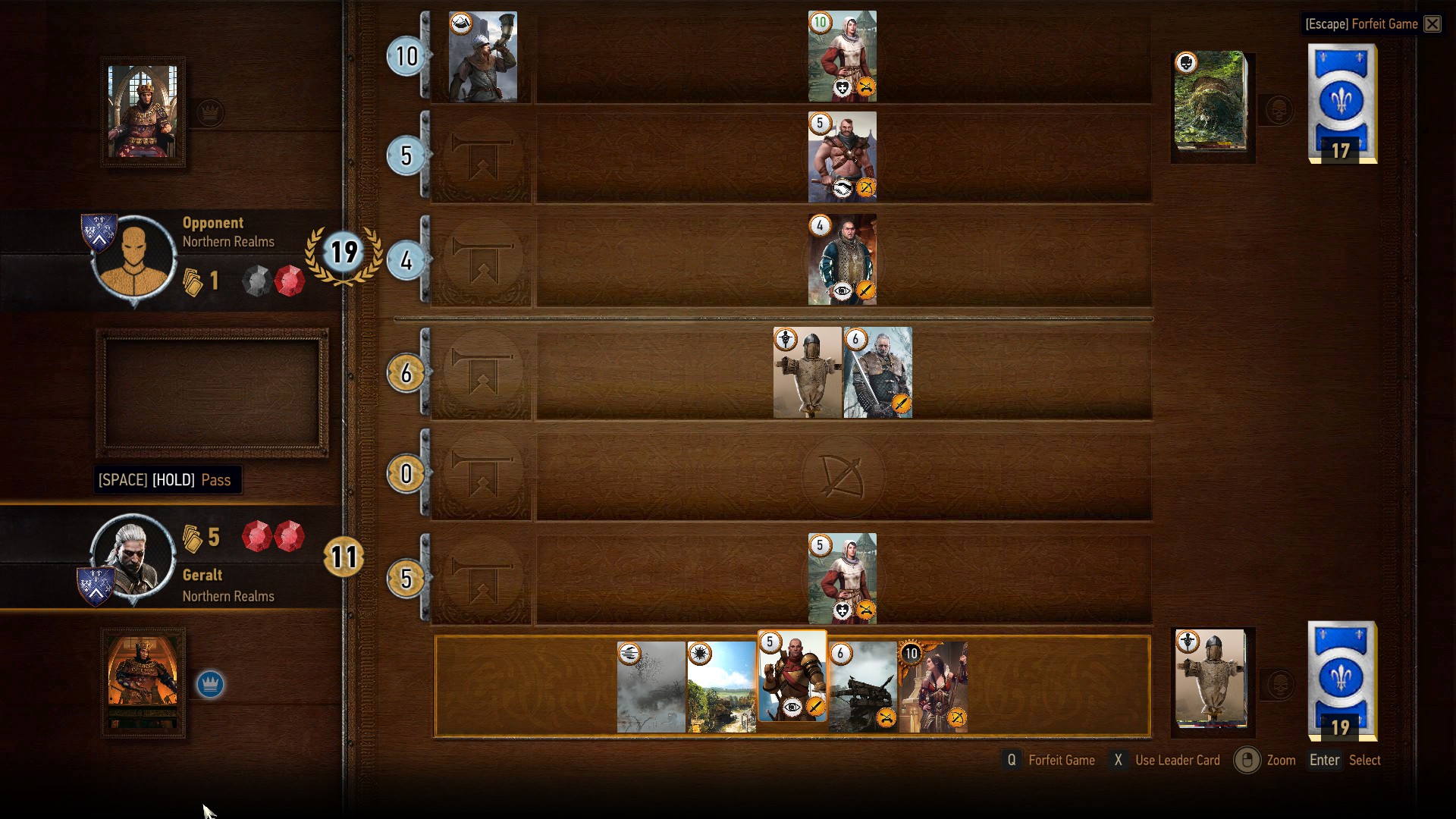 Spies have allowed me to get a 4 card lead here, with another spy to play

Every deck has the choice of one out of four different leader abilities. These don’t count as part of your 10 cards drawn at the start of the game, so it’s essentially a free move without sacrificing a card if you want to wait and see what your opponent is going to do. Some of them are pretty powerful too; my personal favourite is Emhyr var Emreis’ ability to draw a card from your opponent’s discard pile. Have a look through the ones you’ve unlocked and find one which suits your strategy! 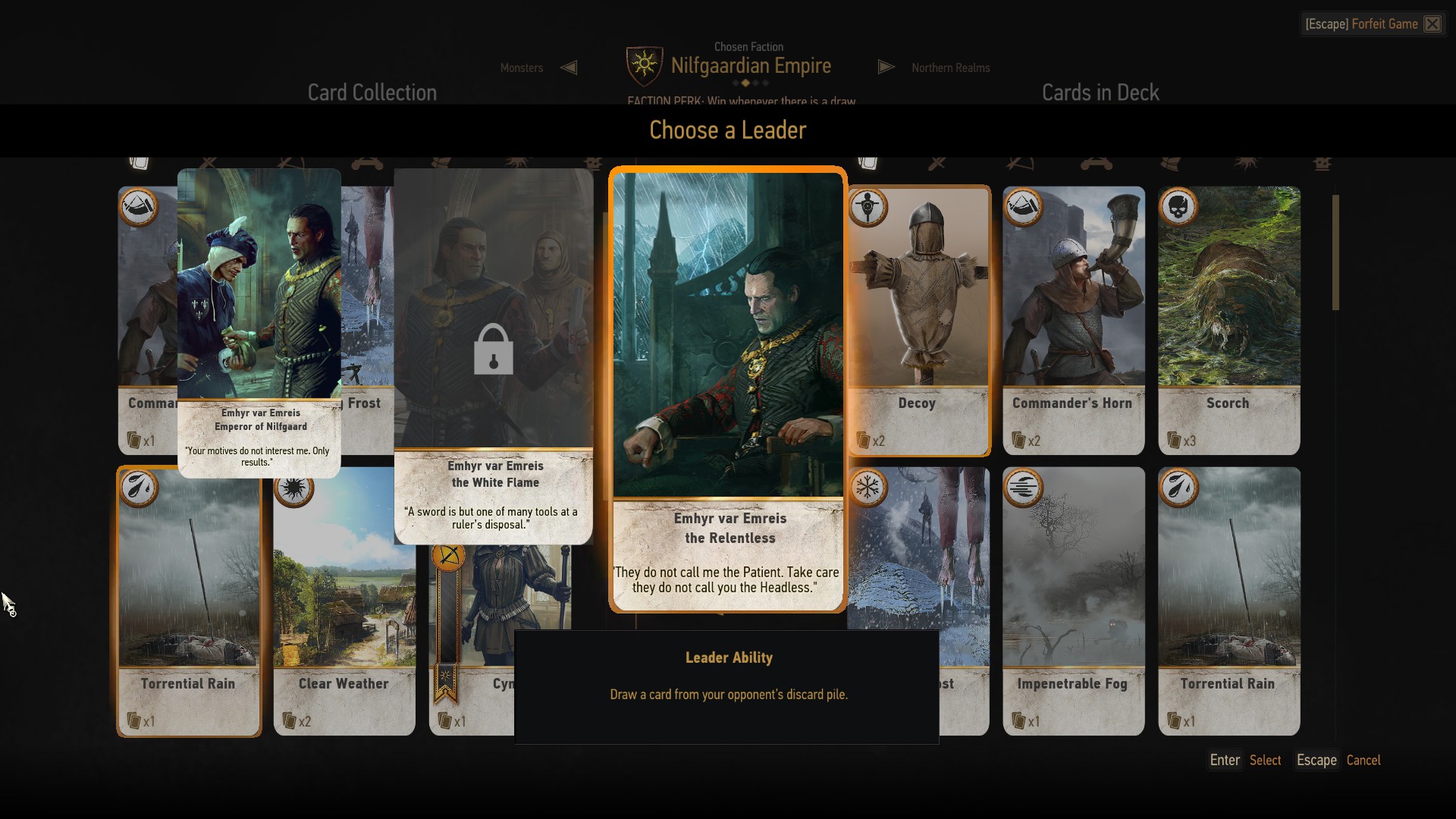 If you draw a Scorch card, bait your opponent into using strong cards 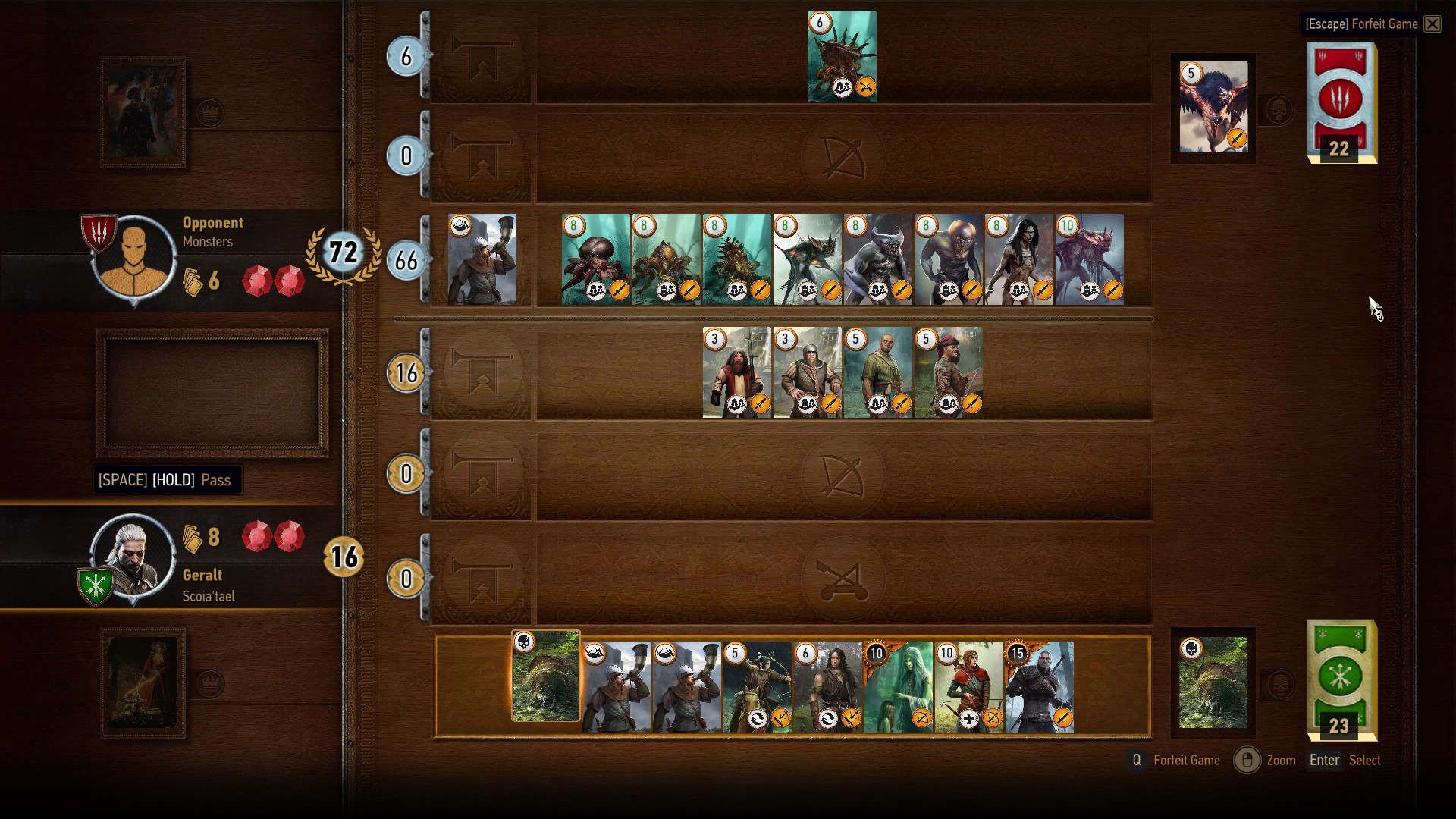 A second scorch card here would take out 66 points in two turns!

Take advantage of their faction choice with weather cards

What I mean by this is that each faction usually specialises in one or two card types. Monsters, for example is nearly all Close Combat with only one or two Ranged/Siege cards while Scoia’tael tends to be mainly Close Combat and Ranged. This is where your weather cards can have a huge impact; one Biting Frost to a Monsters deck can ruin their day, provided they don’t have a Clear Day card to clear all weather effects. For Northern Realms, they have a wide variety but their strongest cards tend to be in the Siege category. Have one or two extra Torrential Rain cards to counter this! 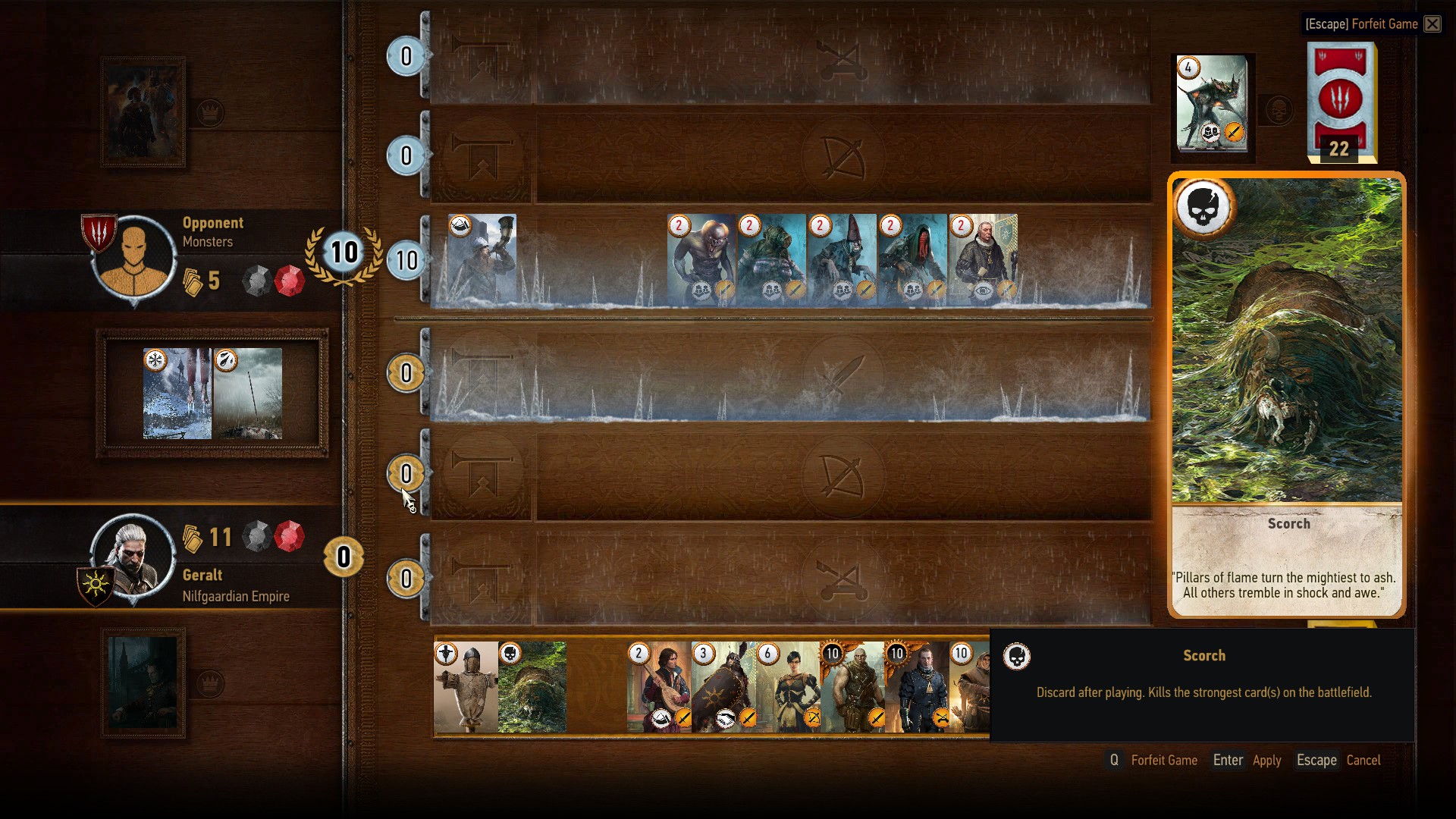 Example of a strong Biting Frost vs a Monsters deck

Take out the rubbish cards from your deck

Having more cards in your deck doesn’t necessarily pay off as it means you have a higher chance of getting the rubbish ones. As you start to accumulate more cards during your travels through Velen, Novigrad and Skellige, start replacing the not so strong cards with the better ones. Also remember that there is currently no limit to the amount of Hero cards you can have in your deck, so a Hero card worth 7 attack is usually a better option than a non-Hero worth the same. 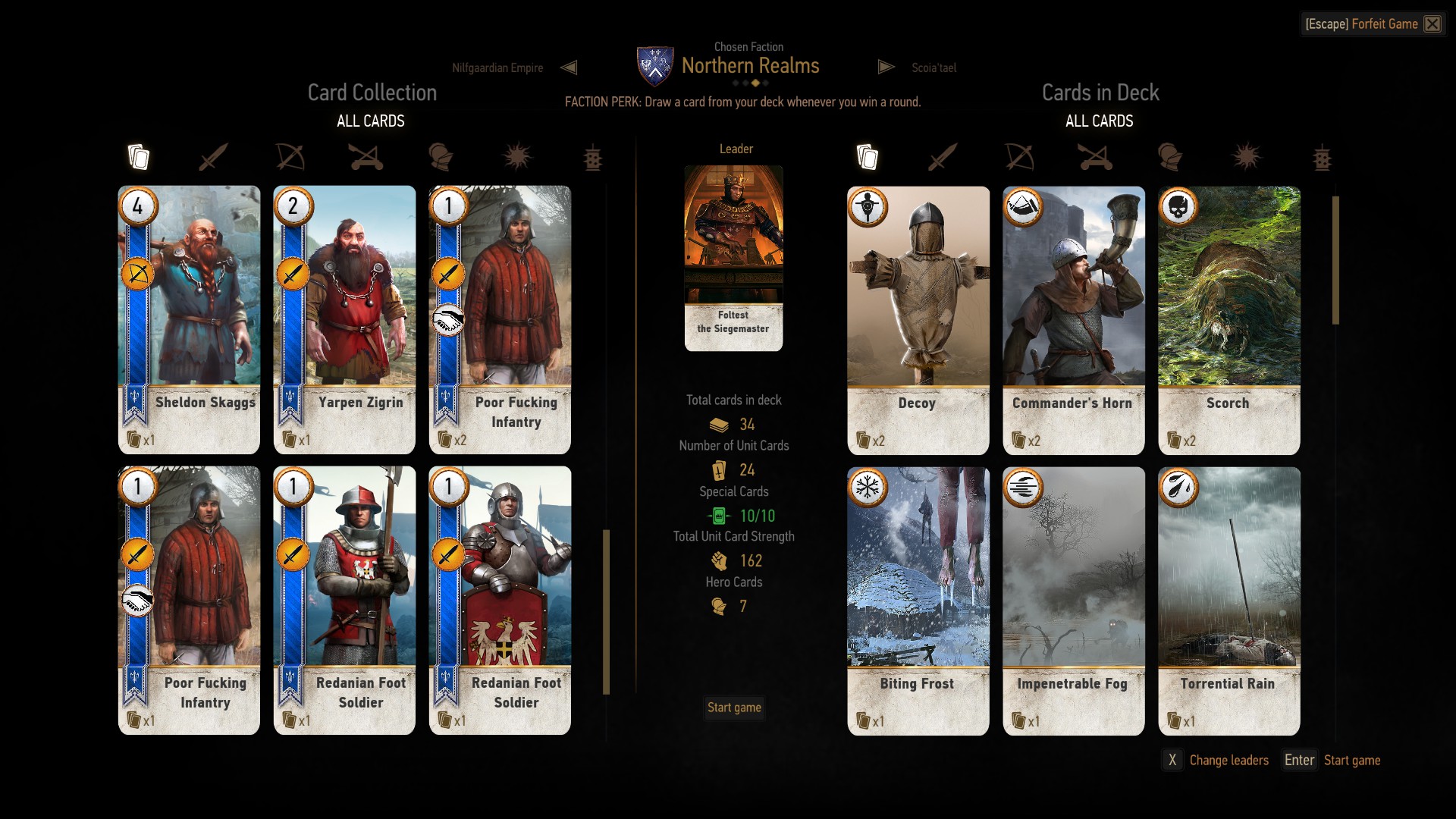 Don’t stack too heavily on one card type

It may be tempting to play all your Close Combat cards in the first round because you have a lot of them, but if your opponent is focusing more on Ranged or Siege then one Biting Frost card can ruin your round. Instead, in a round where you’re going for the win, try to even it out across all three types. Unless you have a lot of Hero cards of course, in which case stack to your hearts content! Remember to use this to your advantage too however; if you have a weather card to counter your opponent stacking on one type, use it! 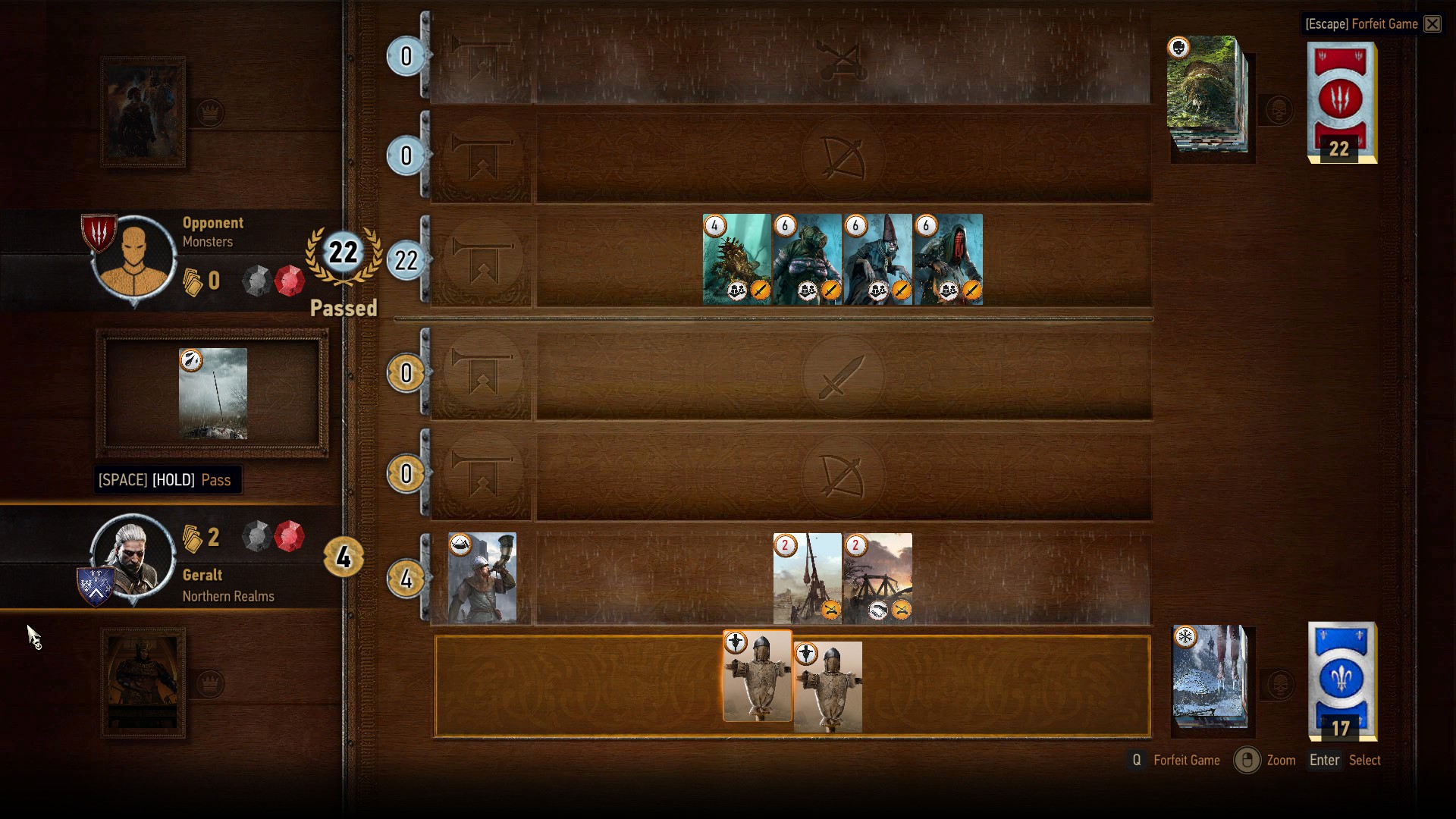 Decoys have a lot of synergies

If used correctly, a decoy can be crucial to win those close games. They have three main synergies; the first being with spy cards played by your opponent. You can simply use the decoy to return the spy card to your deck so you can play it right back at him. If you both have multiple spies and decoys, this can often result in one or both players having 14 or more cards.

Another card it synergises well with is anything with the Medic ability. Medics allow you to revive one card from your discard pile and play it instantly. You can then decoy the Medic to revive another card and so on. The final synergy is with a specific card; Villentretenmerth. What this card does is kill the opponent’s strongest Close Combat card in play. This means it is absolutely wonderful against Monster decks due to the amount of cards with the Muster ability, you can often take out anywhere from 9-30 attack points at once, while giving yourself 7 at the same time. Decoy allows you to do it twice! 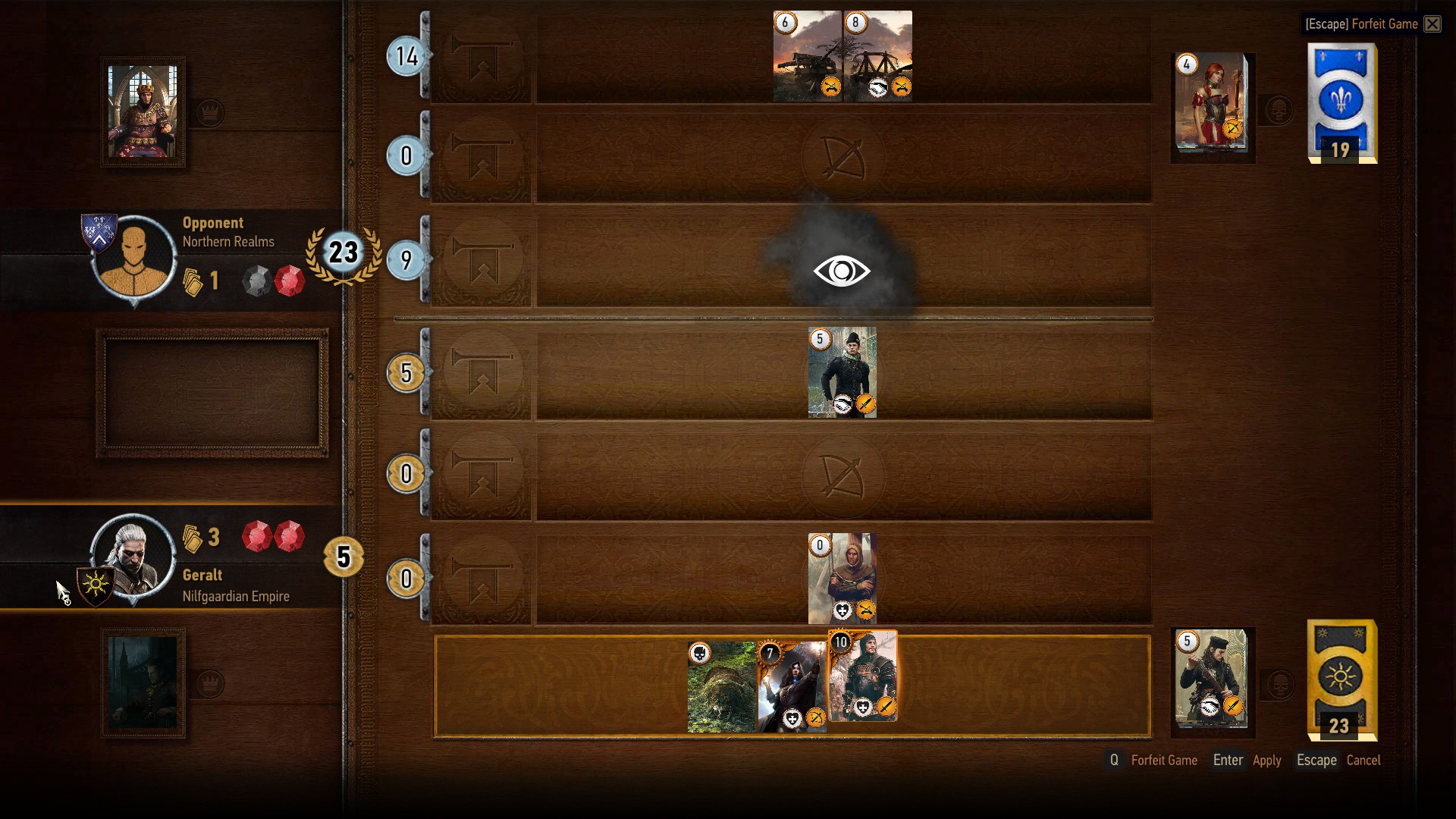 A decoy here would allow me to revive 4 cards

Every single faction has a specific ability, separate from the leader abilities. They’re unable to be changed but can be very useful. For every round won, Northern Realms draws an extra card. The Nilfgaardian Empire wins any round that ends in a draw, while Scoia’tael has the option of who goes first (hint; always choose to go second so you can react to how your opponent plays rather than vice versa). Monster arguably has the best ability of the lot, with one unit card being kept on the field after the round has ended. Use them to your advantage, for example if you’re playing as the Northern Realms and want to win the round but would have one less card than your opponent, go for it anyway as you’ll draw one back! 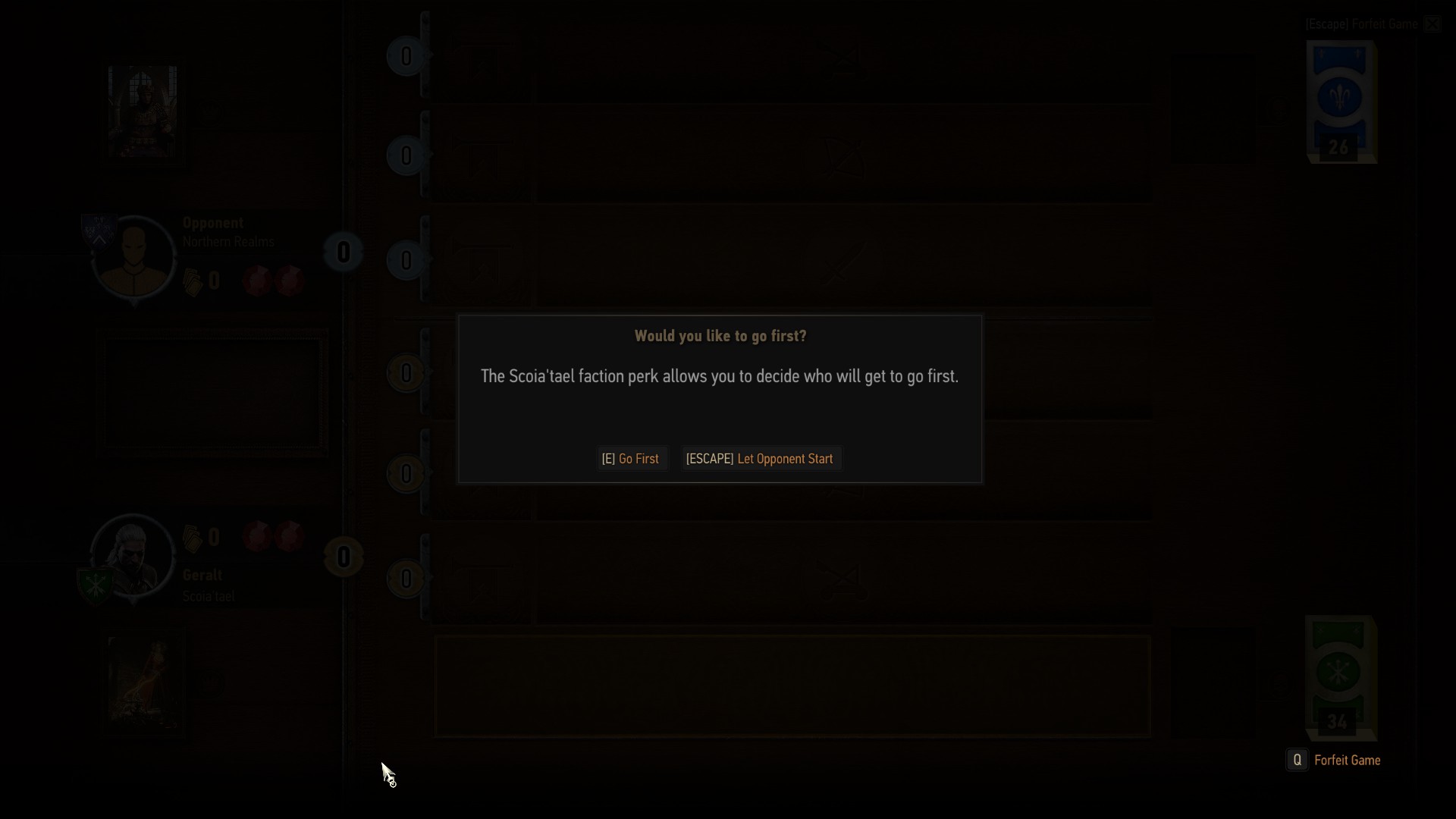 Always let your opponent go first when playing as Scoia'tael!

At the end of the day, you’d be foolish to say Gwent compares to a fully fledged CCG such as Hearthstone or Magic the Gathering. However, it’s still a fantastic addition to The Witcher 3 and can become quite addictive.

Here's how you can play Gwent online!

Don't understand the rules for Gwent? Here's a basic overview!