Learn the hazards and rewards for diving into Assassin's Creed 4's shipwrecks.
by Amanda Wallace

Somewhere in Sequence 6, Edward Kenway unlocks a diving bell. You, of course, use the diving bell for the story mission where you gather medicine from a wrecked ship, but there are other purposes for the diving bell.

Shipwrecks dot the Caribbean seas, with treasure chests for the taking. In a period appropriate fashion, these treasures will not be easy to grab and will require scouring the bottom of the sea as well as dilapidated boats.

Shipwrecks are denoted on the main and mini-maps by a diving bell-like shape. On location, a shipwreck typically looks like a mass (either mast or other ship part) rising out of the water with a blue circle around it where you can "dock." 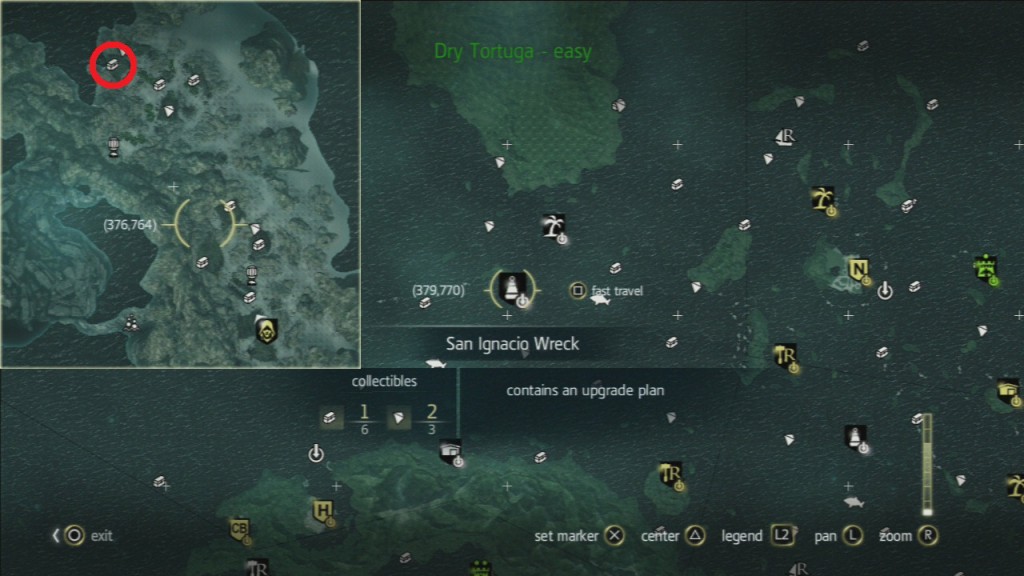 If you have the diving bell, once you dock, you should start the sequence to go under water and begin the dive.

This is a guide to the Assassin's Creed 4: Black Flag shipwreck locations and coordinates.

There are three main hazards in shipwrecks, all with their own annoyances.

Running Out of Air

After you've begun your dive, a gauge will appear in the center of your screen to let you know how much air you have left. When your air is critically low, the gauge will turn red and the rest of the screen will go black and white. 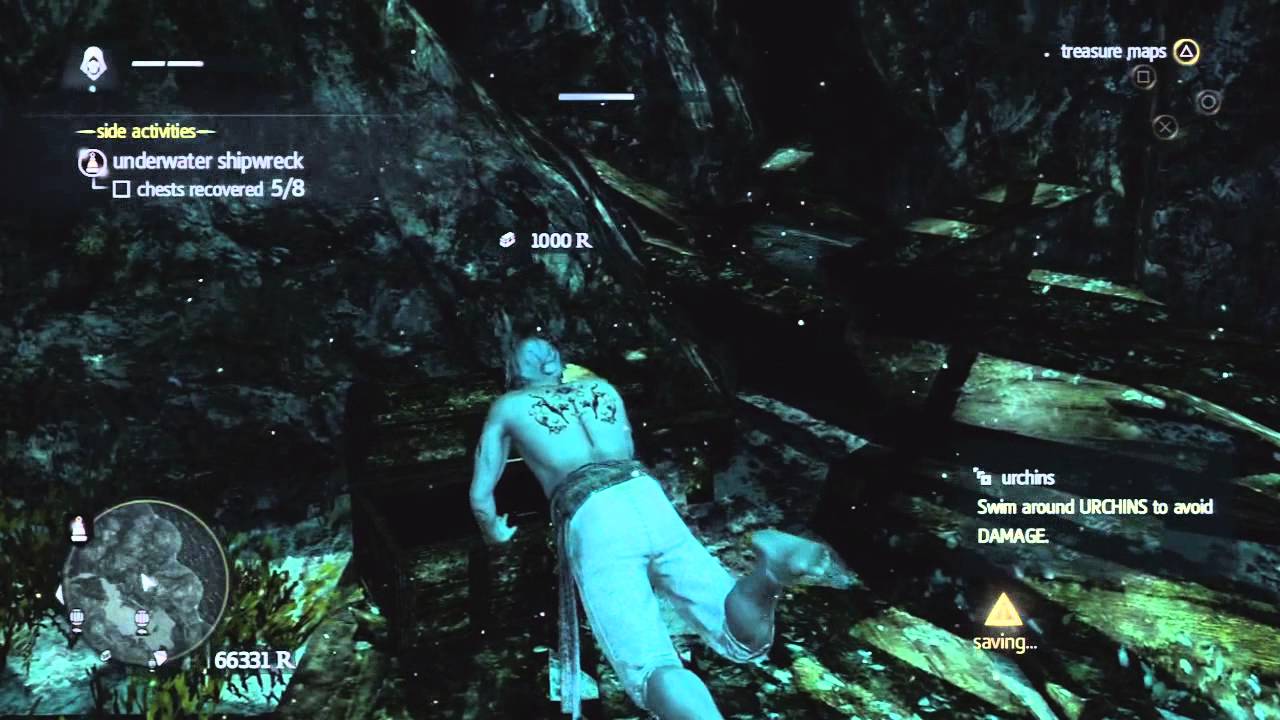 To avoid to blacking out at these points, you must either use the air barrels dropped by your crew (they are the barrel-shaped images on your mini-map) or return to the diving bell. There are occasionally pockets of air elsewhere, but it is best not to rely on these since they are exceptionally rare.

Thankfully the punishment for "death" seems to be blacking out and returning to the diving bell, so it might be worth pushing yourself for that animus fragment rather than heeding the warning.

Unarmed as you are, your best defense against sharks is to not be seen by them. Stealth, as in other aspects of the game, is important here. The game offers the underwater equivalent of bushes where you can hide, and once you are in an air barrel you become invisible to sharks.

A shark's interest gauge is very similar to any other enemy type in Assassin's Creed 4: Black Flag, it's a small red or yellow shape with a slowly filling gauge. Avoid getting that gauge to red and full and you should be fine.

If a shark attacks you, there are occasionally wrestling events that take place. Simply mash the buttons in the prescribed order to avoid dying.

Designed to make hiding in the bushes extra difficult are the yellow eels. These deal damage to you in much the same way as the sharks, but there is less warning (no gauges) for when they notice you and they hide in bushes.

Sometimes they are visible, and in those cases, it's best to avoid them at all costs.

For the completionist, the rewards are obvious. There are several animus fragments that are found only at shipwrecks. Also, if complete all thirteen shipwrecks, you will receive a "Seven Deadly Sins" achievement that will go a long way towards 100% and completing all the Abstergo Challenges. 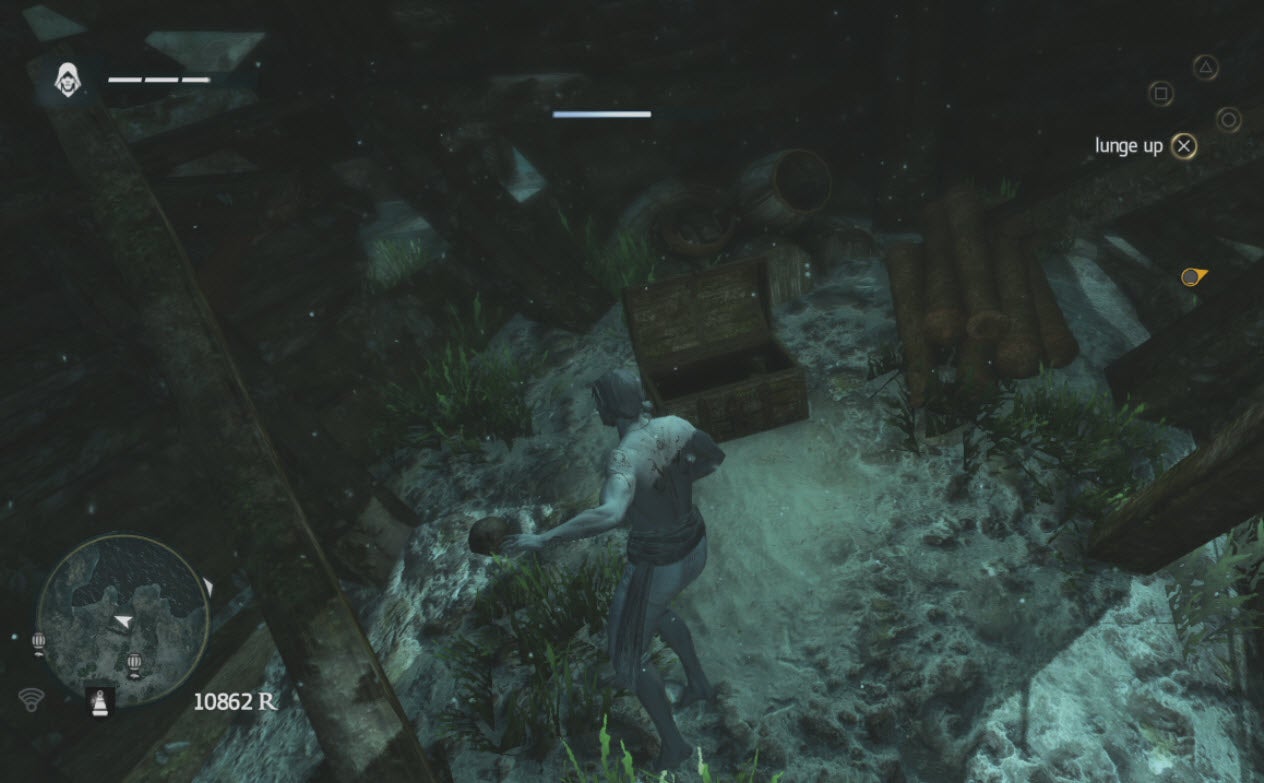 To find out more about Assassin's Creed 4: Black Flag, be sure to check out the complete list of AC4 Guides.