Learn about all the most important locations on the new Miramar map with the help of this guide to PlayerUnknown's Battlegrounds.
by Sergey_3847

Bluehole Studios finally revealed the look of the next playable map in PlayerUnknown's Battlegrounds -- Miramar. This new map is much different from the Erangel map and mostly consists of deserted landscapes instead of the typical forests and fields.

However, there will still be many settlements with a huge number of buildings, many of which are either under construction or abandoned. The map is currently available on the PC test server, so be sure to check it out as soon as possible.

If you're hearing about the Miramar map for the first time and would like to find out all the new details about its main locations, then follow the guide below for all the info you need. 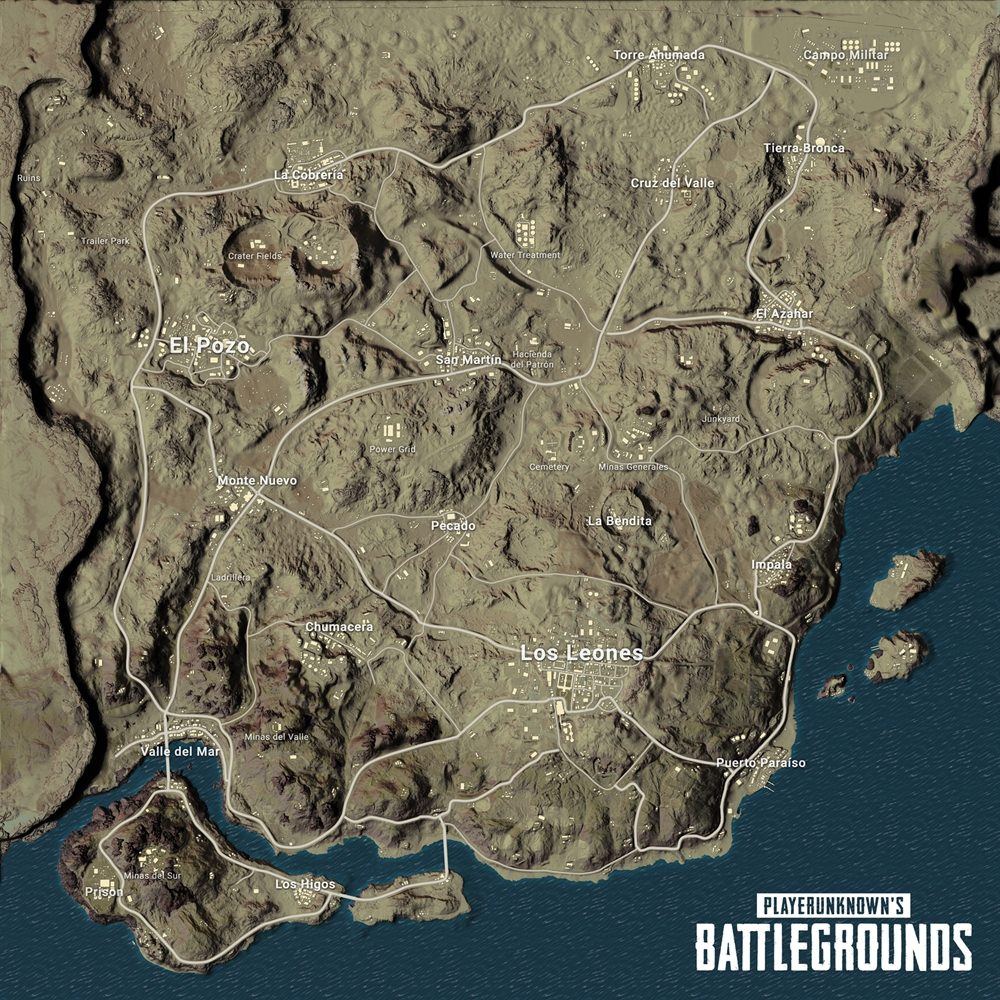 The two biggest cities on the Miramar map are El Pozo and Los Leones. El Pozo is located in the northwestern part of the map. It's a massive industrial district that features a huge textile factory, hunting grounds, and a motorcycling track.

Los Leones can be found in the south-central region, which features many tall buildings, malls, and a massive City Center. This means that Los Leones will be a number one spot for looters and snipers who prefer to take position on the topmost spots.

In the southwestern part of the map you can see two small islands that are connected to the mainland by the two bridges -- the only way out of the islands.

The Del Toro bridge in the western area connects to a gorgeous place -- Valle del Mar -- which features a school and a church. Players who will gain control of this area will own and control the bridge and the entire island.

The central part of the map hosts the town of San Martin -- a desolate location that will not be kind to careless players. The checkpoint at Hacienda del Patron will give you a decent overlook of the area, so use it before venturing in.

Monte Nuevo is located to the west of San Martin, but it looks almost the same, as if the war took place there. However, don't just pass by -- try to pillage the half-destroyed houses for some decent loot.

Both locations can be found to the south of San Martin. Chumacera provides you with another great looting place, which is the abandoned textile factory. It will surely attract the most desperate players, but the risk is worth it for all that sweet loot.

And, if you want to try your skills on the arena, then be sure to visit Pecado. There you will have the chance to raid the biggest casino building in the entire map.

These are two shoreline settlements located to the southeast of Los Leones. They provide access to another two islands, which are much smaller than the one connected to the Del Toro bridge.

These two islands have no means of connection to the mainland other than traveling by boat, so there is a great possibility of some unusual action in this particular region.

The two most eastern locations on the map are represented by several  settlements, such as El Azahar, Tierra Bronca, and Torre Anumada. Not much is known about these locations yet, so keep your eyes open for further information.

The military camp, on the other hand, is a potentially very lootable yet very dangerous location similar to Sosnovka military base in Erangel.

That is all the info you need to know to be able to start playing in the new Miramar map. If you need any further help with the game, then be sure to check out all the latest PUBG guides here at GameSkinny: